Guardians of the Galaxy (2014) Review

Yeah. Speedy’s doing a movie review. Deal with it.

However, I was baffled after watching it that it was as good as it was. All the trailers and everything pointed towards it being annoying and crap, and another one of those random Marvel films to ignore. But it was good. No. It was amazing. Baffling. In fact, almost blasphemy towards my opinion.

But I will tell you why it was good.

Everything about it. It’s gloriously understated and it doesn’t take itself too seriously as a film, and in essence has a great sense of humour – which is unlike many other super hero films nowadays, it is brilliantly acted and has a good feeling to it that can’t quite be described.

The first 20 minutes felt like the start of one of those fantastic 70’s/80’s classic films like Back to the Future: feel good, not concentrating on special effects and using the characters to their full effect through purely great acting and a fantastic script. And there was no concentration (or over use) on special effects or over the top action; it was just introducing you to the characters – in a brilliant way. That is what films like Back to the Future did, and it is gloriously refreshing to see a modern film doing it again; not being without a fantastic and feel good soundtrack, which is essential for a film like this. Having a likable character dancing into the film through feel good 80’s music, accompanied by huge opening credits and a great set: it’s perfect to kick the film off.

Who knew this guy would be so cool?

It introduces the characters in such a brilliant way that you instantly love them, and this is done through spot on acting with fantastic personality; particularly through Chris Pratt, who is fantastic throughout as Star-Lord, or Peter Quill, and is the perfect main character for a film like it is, bringing tonnes of personality into it. You know I said Rocket looked annoying earlier on: well, the fact that he wasn’t was one of the most shocking things about the whole thing for me. He’s actually a great character who adds a good layer of comedy and sarcasm to the film, and this is done through fantastic reciting – by Bradley Cooper – of a well-written script that is actually quite funny. Yep. The film is actually quite funny; but it doesn’t concentrate on this aspect too much, and instead also concentrates on the development of the characters and, in essence, the story.

You better believe he isn’t as annoying as he looks.

Before I get onto the story, I just want to emphasise how brilliant and refreshing this film is, and how well the characters are developed, and how important each one is for the film’s success. Rocket (Bradley Cooper) brings comedy, Groot (Vin Diesel) is, well… Groot. Everyone loves Groot. Drax (Dave Bautista) brings the story to crazy new places and brings a violent edge and a slice of good ol’ comedy through ignorance, Gamora (Zoe Saldana) pretty much carries the story and brings a little bit of that much needed romance, Star-Lord, or Peter Quill (Chris Pratt), is the perfect main character/hero and Ronan (Lee Pace) is a great villain who brings a dark under-layer to the film. And I like Yondu, but I can’t quite explain why I do. He’s just good.

The story, actually, is also great. It isn’t predictable or over-the-top. And although it isn’t predictable, it is quite a simple story that can be followed easily: and this is great and essential for a film you can sit down and enjoy. However, it did all go a bit mad towards the end; but who cares? A good blockbuster needs a good finale, and the finale of this film was fitting to the rest of the film: you don’t want it not to be fitting, now do you?

And some final points, the cinematography is great and there is some brilliant and satisfyingly fun action. It’s also refreshingly not as long as a lot of films nowadays, at least, if it is, it doesn’t feel like it. And, finally, instead of using CGI loads, it instead utilizes great costume design and make-up for all the aliens – which is great. 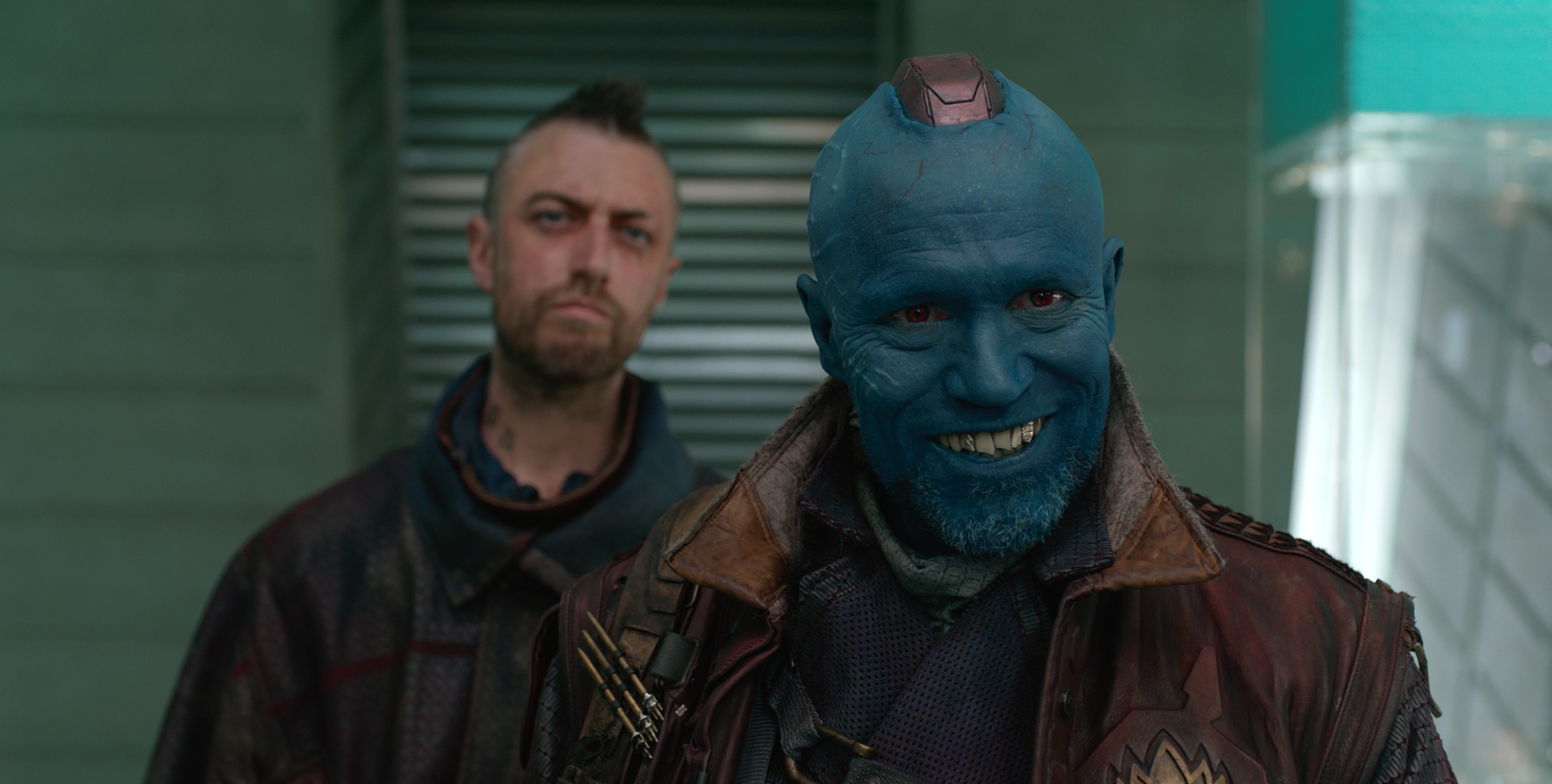 Little did you know, the guy behind him wishes he was Yondu, and prays to a small shrine of him every night.

Guardians of the Galaxy is a fantastic thrill ride filled with humour and brilliant and unique characters, which never goes too mad or over-the-top and feels just like one of those 70’s/80’s classics, being gloriously understated and refreshingly un-reliant on length or CGI. Refreshing, fun, brilliantly written and brilliantly acted, this is the best Marvel film I’ve seen and is pretty much the perfect blockbuster. Screw The Avengers when you’ve got this.