I like metal, and I’m pretty sure it’s liked me… Alright, School of Rock reference aside; I really do like metal, and it’s fast becoming my favourite genre — with it’s knee-thump provoking heavy riffs, power chords, drums and mad screaming.

There’s one rule for this list, though, an album can only be in it if it has roaring, screaming or growling vocals; so Rage Against the Machine and Mastodon aren’t aloud in. But here’s my Top Ten Metal Albums: 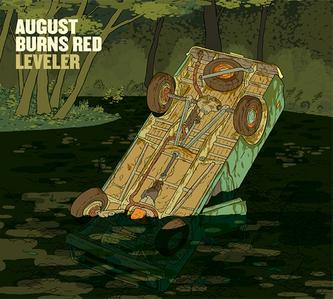 August Burns Red, eh? They’re a good band. And this, Leveler is one of their best albums. It’s extra-heavy, extra-bassy and extra-good; with Poor Millionaire being possibly my favourite ABR song to date. And then there’s 40 Nights. Oh man. Now that song has some breakdowns. This album is the king of breakdowns, and that’s what brings it onto this list.

Turisas? Bet you haven’t heard of them. Well, I don’t blame you if you haven’t: they’re an obscure Finnish self proclaimed “Battle Metal” band. The thing is, I saw them live in Bristol, and they really did put on a show — so I had to put one of their albums in here. Stand Up and Fight is surely their best one, and my favourite; with the best pirate song, Hunting Pirates. It brought out the viking within me, so I think it deserves its place in this list.

SOiL! Hooray! A nice band! Although they’re my 5th favourite band, they’ve only made four albums I like… But all of them are amazing. re.de.fine has nostalgia value of the others, with Suffering being their first song I ever heard and being stuck in my head for probably about three years. This album has its fair share of amazing songs, choruses and nostalgic value; and I’m surprised by myself putting it as low as 8th in this list.

The reason why I put re.de.fine as low as 8th is that its competition is just too good. This, by Soilwork, my 4th favourite band, is probably their best album. It’s what I call their masterpiece, with 20 songs across two discs in an amazing overall album – which is filled to the brim with variety and catchy choruses.

Here they are, Killswitch Engage! The kings and creators of metalcore, this album is so close to being their best one. With memorable songs from A Bid Farewell to Take this Oath to The End of Heartache itself; this album’s got it all.

Sylosis again… again? Yes. They’re getting yet another mention on here, and because this incredible album is my fifth favourite metal album. Dormant Heart really is an incredible album, and quite a bit better than Monolith. It does this through further improved vocals and a more developed sound — and the fact that this is definitely the band’s most powerful album and possibly the most powerful album I’ve heard. If you get anything from reading this list, please give the songs Leech and Mercy a try. THEY’RE AMAZING.

Lamb of God. Now this is a nice band. Resolution is a masterpiece within thrash metal and groove metal (if that is even a thing), and is definitely Lamb of God’s best album. It’s overflowing with awesome riffs and fantastic vocals from Randy Blithe, with one of the best metal sounds I have ever heard. Ghost riding in the aftermath.

You lived through hell, now you’re trying to die
The skin is healed but you’re bleeding inside
Shots fired just to numb the pain
There’s no one left to save

Night blind on the shining path
Ghost walking in the aftermath
Hypnotized, 60 cycle hum
The broken cadence of a distant drum
21 to 1 I’m liking the odds
A blood junkie with a lightning rod
A dirty rig and a heavenly nod
And still you wind up nowhere

– the best lyrics ever

The kings of metalcore were at it again in 2006 with this blinder of an album. As Daylight Dies is Killswitch Engage at their best: with heavy breakdowns, fast-paced riffs and the best, most catchy choruses ever so perfectly sung by Howard Jones. This album totally deserves a place in the top three if it has pretty much the best metal song ever on it, My Curse.

Anyway… Constellations really is an amazing album. Every song on it is as powerful, memorable and breakdown filled as the one before it. It’s heavy, its unrelenting, its at times catchy; and everything in it sticks in your head for a while after hearing it. White Washed, Mariana’s Trench, The Escape Artist, Paradox, Indonesia. All incredible songs.

And here’s some albums that almost got into the list, but either weren’t quite good enough or don’t have the same nostalgic value (ones in italics being especially close to being in the list):

Awakened – As I Lay Dying

The Big Dirty – Every Time I Die

Sworn to a Great Divide – Soilwork

For We Are Many – All That Remains

And now… The one you’ve all been waiting for… The big one, the best one, the greatest one, number one… Sorry, I’ll stop now. Here it is:

So this is number one. By, SOiL, my favourite nice band. This is definitely number one. Whether it’s because I feel so nostalgic about it or whether it’s actually the best metal album I’ve listened to, I’m not quite sure; but it’s got to be number one. It’s angry, it’s heavy, it’s catchy, it’s good. It’s just good. Wait, no, amazing — not just good. It starts in the most angry and awesome way possible with the nuclear bomb of a song that is Breaking me Down, and it just gets better and better as the album goes on – although Halo is its best song at track 2. Oh yeah! Halo. If you don’t listen to it, I will personally crush you. It’s the king of aggressive American metal, and has the catchiest chorus of them all.

“I will stone you, stone you; wrap my arms around you. My little halo.” – the genius words of Ryan McCombs.