Ah! Another review! Finally. Sorry about the lateness, I’ve had a lot on my plate recently (mostly school and, umm… not much else). But I’m back, Babeh!  As you probably don’t know, I joined this site for one main reason, retro gaming! I love retro gaming mostly because, when I was younger, we couldn’t afford the next generation consoles or a PC. I grew up with the SNES, in 2004! My favourite titles included Mario Paint, Mario All-Stars and Mario Kart. They are all fantastic games, but my absolute favourite game was Super Mario World. It’s still my 2nd favourite game of all time, my first being Yoshi’s Island for the GBA. Anyway, enough rambling, let’s review!

Super Mario World is the 4th main series Mario game, after Super Mario Bros. 1, 2 and 3. It really upped the graphics from its predecessors, releasing on the brand new 16-bit console. The game had tighter controls, a brand new art style, one we’ve yet to see done again, and sweet music. Better level design, more power-ups, enemies, levels, worlds, secrets — the list is endless! Now, let’s look at some specifics…

First, let’s talk about the plethora of power ups this game has to offer. You have your standard Mushroom, Fire Flower and Star, but newly added to SMW is the feather. This gives Mario a cape which he can use for many things, like gliding, flying, and a spin attack. It is easily the best item in the game. If you want to speedrun this game you will need this item, it drastically increases movement speed and gives you more options. In exchange, you are a lot harder to control and you will need to be ready for anything, especially when flying. You also get Yoshi, who allows Mario to take a hit without making him lose his current item. Yoshi then runs off down the nearest pit, unless you are able to get back on him. Yoshi adds yet another attack, his tongue. He can swallow enemies like they’re nothing. But Koopas are a different story. Yoshi keeps their shell in his mouth, and depending on the colour, they have different effects, like Red shells allow him to spit out fire, blue gives him wings, and my favourite, green, he spits it out normally! I don’t know why I like the green one, maybe it’s the simplicity of just spitting something out at an enemy which I find satisfying. This feature is one of the best parts of the game. I found myself constantly switching shells throughout each level for the fastest completion time. Also, if you eat enough fruit, found on bushes in certain levels, Yoshi lays an egg containing a power up. In the early levels, fruit is plentiful, but later on, they start becoming rarer and rarer, and eventually don’t show up at all! I find myself not using this often, but it’s definitely good for newcomers who will go through a lot of power ups during their course. Finally, he allows Mario to jump off of him for a 2nd jump if he is in a tricky spot or if you’re about to die. Yes, you may live, but at what cost…

All the Items in the game. PS, the P Balloon turns you into a, you guessed it, balloon!

Using these techniques, you can access the very well hidden secrets in the game. These range from secret levels, power up areas, new switches and even 2 entire new worlds, the Star Road and the Special World. Beating those really hard levels puts you into a new dimension, a world where all Koopas are Mario clones, and Bullet Bills are Birds… and it’s AWESOME! This new world, even though it’s just a skin swap, is super cool to explore and see what has changed. My favourite change is that the Piranha Plants turn into creepy pumpkin heads, which reminds me of Halloween! Speaking of such, the colour scheme swaps from the spring-like palette that the game is normally in, to an autumn-like, darker palette, which is really cool. It all feels like it’s had effort put into it, it just looks right, It doesn’t look like it was tacked on at the end by Nintendo. It feels like a true reward for not only finding the secret Star Road, but finding the secret secret Special World! 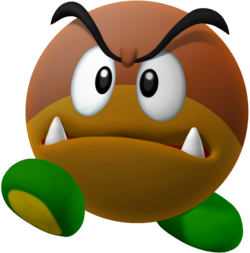 The enemies are cool too, you have your standard Koopas, Bullet Bills and Piranha plants, but you also have new enemies like Torpedo Ted and the unique boss fights, which are awesome. Unlike SMB 3, they all have different traits. like Iggy’s tug-of-war style fight to Lemmy’s trick room. Each fight gives them character, and makes them feel like individuals rather than just a reskin of the same character. The biggest difference is the Goombas. They look more like nuts than mushrooms. They are in fact called Galoombas, a different species. If you step on them, they are stunned and you can kick them around. They are much more interesting than the regular goombas. I really like them, as they can be used as weapons to fight against their friends! They’re a bit like the anti-Ikes. Shame they haven’t been in many other main-series Mario games. These varied enemies, though, with the character they have gives the game that much needed variety, so it’s not just jumping on reskins’ heads.

Finally, the controls. They are undoubtedly the most important part of a platformer. And. They. Are. PERFECT. You can accurately predict where you will land, and can adjust it with ease. The jump arc is flowing and natural, with the right amount of gravity, which is especially important when flying with the cape. If you have enough skill to control the cape, you know exactly where you’re going to go, and if you fly off in a random direction, you know what you did wrong, and why you moved as you did. The levels are built perfectly around these controls and movement options, and they are easily the best part of the game.

What do I think? I seriously have no problems with this game, it controls well, has great variety in enemies and power-ups, awesome levels and secrets. It truly is one of the few perfect games out there; and that is why I give this game the site’s very first:

But what about my favourite game of all time, Yoshi’s Island GBA? I wanted to give this game a 95, but, why would I? There’s no problems with it, in my opinion, so it definitely deserves 100/100. What would you give Yoshi’s Island GBA then? Well… wait and see!