Before I start this, I would like to apologise on behalf of mostly Marcus and Emmanuel about the unofficial 6 day hiatus we’ve just experienced. Wow, I actually sounded slightly professional-ish then. Didn’t know I had it in me! I suppose everyone’s favourite idiot Milo doesn’t, but maybe I do. Saying that, though, I’m also an idiot. Anywho, this is sort of a news flash article as well as an opinion article all on last night’s Nintendo Direct, so, without further adue, here we go.

The most exciting announcement for me was left till last, being Kirby: Planet Robobot. This game was an announcement I definitely wasn’t expecting, as I certainly wasn’t thinking Nintendo Tweet’s Kirby anticipation would be fulfilled. Especially considering the last handheld Kirby game, Triple Deluxe, was released only a couple of years ago, it was a nice surprise that there’s going to be another one in such quick succession. But I suppose in the DS days there were three Kirby games, so maybe I shouldn’t have been surprised. Aside from my reaction, the game itself looks like brilliant fun. Alongside fantastic graphics in the same style of Triple Deluxe, the worlds and environments look nice and the gameplay looks nice and… Kirby-y? Yes. But that’s good, because I love Kirby. Also, you can play in a mech suit, which will surely be a lot better than the nice looking but slightly flat gameplay wise Hypernova Kirby. Also, that multiplayer boss-fighting game looks like fun. And what about that release date? June 10th, 2016. That is pretty damn soon.

All in all, this game is shaping to be maybe better than Triple Deluxe, even if it is the amiibos which finally set them apart.

I saw someone say it’s like a mixture of Kirby and Titanfall. I’m cool with that.

The Star Fox Zero stuff was all pretty damn good, too.

I probably won’t be able to play it, admittedly, but it’s an exciting prospect anyway – being a new Star Fox game and all. It’s good it hasn’t been delayed again, as I sort of expected that. The game does look noticeably better graphically, too, but to be honest I wasn’t really bothered by that anyway. And according to Mister Miyamoto himself everything has been polished. I, being a bit of a Nintendo fanboy, believe him. He is a legend, after all. As a game I have to say it looks fantastic. I thought people wanted Lylat Wars 2, didn’t they? Then when the announcement came around in E3 everyone was like, “What’s this crap? The graphics suck! I hate this. Die Nintendo.” This is because the internet is so biased that it is ridiculously hard to please, and everyone cares too much about… Some flat textures. Honestly, I couldn’t care less what the rest of the internet thinks, because I think the game looks brilliant, and it is exactly what I want from a new Star Fox, because, lest we forget, Lylat Wars was (and is) freaking amazing. To get a sequel of sorts to that, in glorious HD, too, is pretty much a godsend. It was good to see more of it, at least, and I hope some more people were convinced. Oh, and Star Fox Guard looks pretty neat! I’m glad they’ve told us more about that.

Now, what about Paper Mario: Colour Splash, eh? I’m not particularly a Paper Mario fan, but I know they’re good games. To be honest, I don’t really have much of an opinion on this new one, due to my lack of allegiance to the series. I know that there are a lot of people who do love the series, and a lot of those people will be happy there’s one coming to the Wii U (later this year, no less), and it does look a great game based on what they showed us. Graphically, at least, it looks phenomenal. 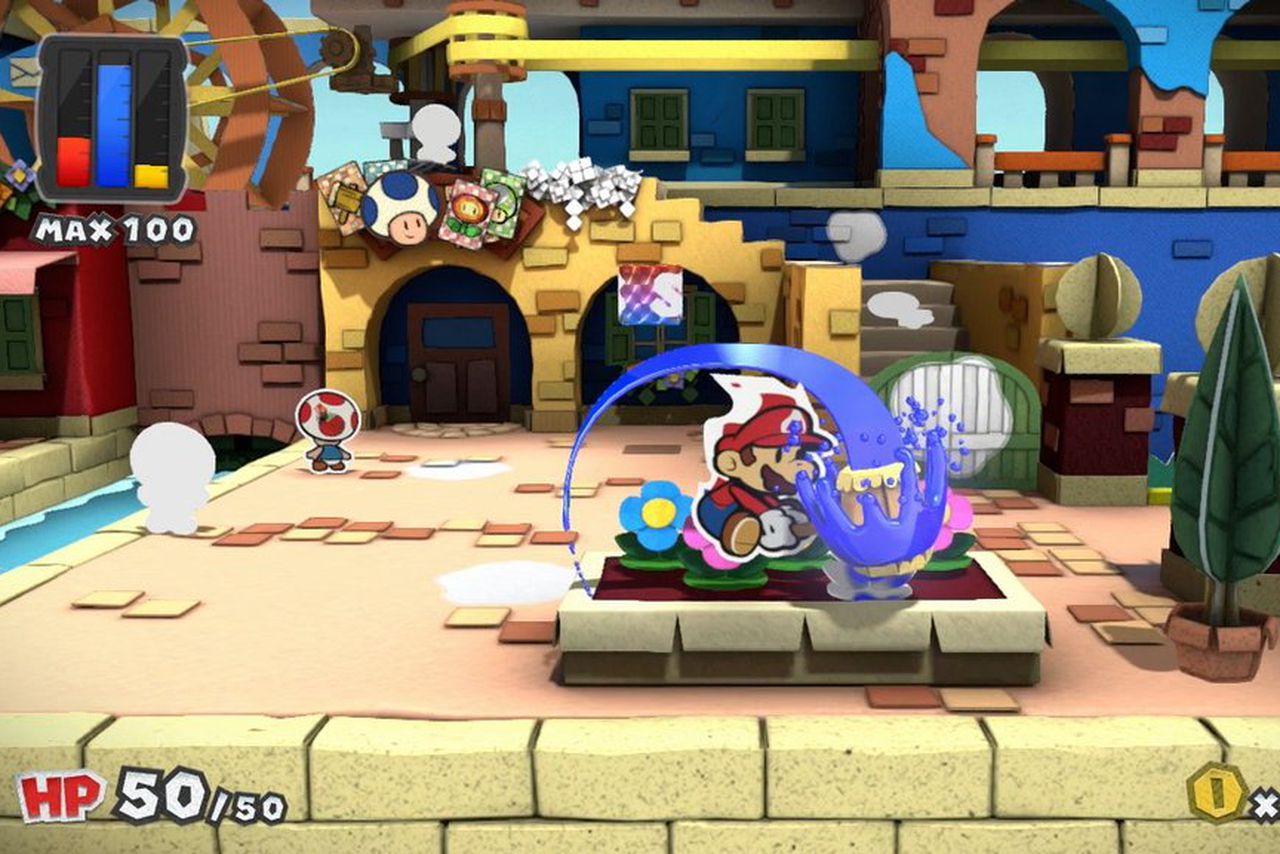 Personally, I was probably more excited about the announcement of Rhythm Paradise Megamix for Europe this year. Even though I’ve never owned a Rhythm Paradise game in my life, I am looking forward to this new 3DS one, especially as it’s a compilation of minigames from all those games I never got. It looks like loads of fun — a rhythm based WarioWare without Wario in it, I guess. With a release date for this year, hopefully I can play some of this mad game by the end of the year.

After a shameful video starring Shibata dancing to a Yo-Kai Watch song and part of Nintendo/Level 5’s blatant attempt to get kids into the game on a Pokémon-like scale, Yo-Kai Watch’s European release date was finally announced. April 29th, this year. I’m looking forward to playing it, myself, and I hope that kids really do like it, and that people don’t get put off by it’s sorta embarrassing marketing campaigns. People do need to stop comparing it to Pokémon, though, if it does have a good chance to become popular in the west.

Anyone remember Metroid Prime: Federation Force from last summer’s E3? Of course you do, you scumbags. You (as the widely spanning internet public) are the one who slated, bombarded and malled the game and its announcement with the most narrow minded comments known to man — even though it actually looks damn good. It’s very annoying that people have slated this game so much because it isn’t quite what they wanted, without considering whether the game actually looks any good in itself or not. With decent little graphics, seemingly, it looks like great fun. The blast ball mode also looks like a good extra — although I may only be saying this because I love blast ball now as of my insatiable love of Rocket League. Yes, I know there wasn’t a 3DS or Wii U edition of Rocket League announced, but I don’t care, because I can play it on the PS4! Would have been cool, I guess, but oh well. That idea only just popped into my head anyway. Back to Metroid, though, I really can’t wait. However, they mentioned something about needing the New 3DS for the game, and didn’t make it clear whether that means it’s a New 3DS exclusive or not. If it is, I’ll be very annoyed. Nonetheless, I doubt it is.

Woulda liked to see more of this though.

There were loads of announcements. The ones I’ve talked about so far are probably the most significant for me. There were a load of demos, downloadable contents and eShop games announced and all that. But I haven’t talked about all of the boxed games yet. Monster Hunter X, as known in Japan, is coming to Europe as Monster Hunter Generations this year, and it looks great.

Dragon Quest VII is coming along with a 2016 release date as well, and I have been convinced into wanting it. However, there was no more talk on VIII, which might look more appealing to me? But yeah, VII looks good. I love the Akira Toriyama art, of course, and the style that comes with it.

Also, Mario & Sonic at the Rio 2016 Olympic Games looks like it’s shaping up to be pretty good, as the newly added rugby sevens should be a fun addition. Seeing the announcement trailer just made me sad that I’m missing the whole Olympics this year, though. I look forward to playing this game anyway, as they’re always quite fun.

I guess that just about raps this whole article up, then. There was a lack of Zelda, I suppose, but all the other announcements more than made up for it; in fact, the thought that all the announcements wouldn’t make up for that insults my very being. It was a good direct, and a lot of great things were announced — especially Kirby: Planet Robobot!