Ayt? Yup, Milo did his oddly named Top Ten Bands Redux, so I thought I might as well do one myself. And NOT just cuz, cuz my opinions have changed. Now, prepare for a badly written, biased and gushing top ten bands — again.

I’m sorry, but I couldn’t not mention Primus. They’re just so stupid and ridiculous and the bass and the lyrics and pretty much everything about them is too damn amazing not to be in this list. Seriously, Les Claypool plays a six string bass, and sometimes he does this: ‘Cause Milo did this, here’s some o’ their best ‘uns (with links! Just click on the text, k?):

Tommy the Cat – Sailing the Seas of Cheese

My Name is Mud – Pork Soda

Harold of the Rocks – Frizzle Fry

Lamb of God are very mainstream as metal goes. Taint a bad thing. They know what they’re doing. I mean, if any metal’s as mainstream is this is, I think these guys are the right ones. They represent the genre pretty damn well. They’re brutal, loud, and really, really groovy. They’re also just generally a bit mental. Randy Blythe accidentally killed a guy on stage, but his vocals are masterful, the guitar is indeed groovy along with the pounding bass, and the drums are top class from Chris Adler. Although I have to admit I’ve only listened to their last four albums, and to be honest I’m not huge on their stuff before that. However, if you knew about Lamb of God prior to this, you’d probably know everyone loves Laid to Rest, and, well, I don’t. 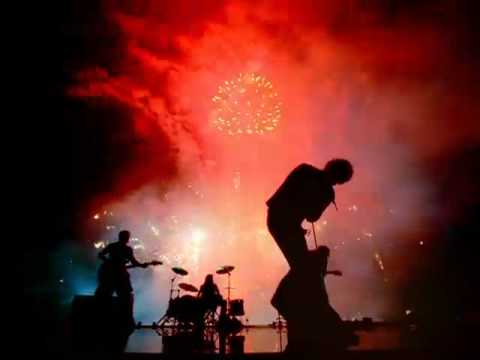 Audioslave, from masters of rock including Chris Cornell and Tom Morello of Soundgarden and Rage Against the Machine fame respectively, are the best supergroup in the history of music. And they were a supergroup. I know RATM and Soundgarden weren’t going while Audioslave was, but it was all Rick Rubin’s idea and it was the band members bar Zack de la Rocha from RATM, and the guy from Soundgarden – so it was a supergroup. Anywhom, they’re amazing, because, one, they did some pretty amazing riffs, – by some, I mean many, many, many – two, the vocals, guitar, bass and drums were all immensely well performed from start to finish, and three, Coshise. You know, their first song. Also, Tim Commerford on the bass really came into his own with these guys.

Show Me How to Live – Eponymous

Your Time Has Come – Out of Exile

The Worm – Out of Exile

If you thought Audioslave were chunky (I didn’t say it was, but you know), you though wrong. Well, you thought right, but that’s not the point. What I was trying to say, but failed to, is that Clutch are chunkier. I’m incredibly jealous of those lucky peeps who saw them at Download last year, because, MAN, they would have been amazing. Their chunk is incomparable. Their lyrics aren’t far off Primus’. X-Ray Visions is something Milo views as a sentient being, not just a song. I’m in a similar situation. Just listen to these legends now. And I swear Neil Fallon is the best man alive, or something.

Let a Poor Man Be – Strange Cousins From the West

6. Rage Against the Machine

Here comes Zack de la Rocha’s ol’ crew, like it wasn’t. This is the first returner for this list, and also the first that hasn’t moved since my original. Rage Against the Machine are in this list because their riffs are even better than Audioslave’s, arguably, their lyrics are stupid but sorta funny, de la Rocha’s a legend, and its morphing of bash rap and chunky (not quite Clutch chunky) metal is a godsend for the eardrums.

Killing in the Name – Eponymous

Calm Like a Bomb – The Battle of Los Angeles

These guys have moved down a place, but they’re still the awesome band they were when I did my original post. Their latest album, The Ride Majestic, epitomizes everything great about Soilwork, from their fantastic melodic death metal sound to their varied vocals, brilliant choruses and blistering pace. As straight up metal goes, this is the best around. However, I appreciate that some might think they’re a little cheesy.

Enemies in Fidelity – The Ride Majestic

Whirl of Pain – The Ride Majestic

Mastodon are movers. 7th up to 4th. They took away my beloved SOiL in their wake, and also replaced Soilwork at this spot – who are indeed a properly good band. That must’ve taken a lot, musn’t it. Nah. I just love ’em more than I did back in last August. A lot more, to be honest. Mastodon, from their awesome name, to their (yes, I’m listing examples again, because I’m very, very lazy) awesome prog, to their awesome metal, to their awesome (yes, I’m repeating the word ‘awesome’) range of vocals, guitar solos and, in my opinion, the best drumming around from ol’ Brann Dailor – who also sings – along with their plethora of awesome songs, featuring awesomeness from cool prog to fast paced catchiness to their complex and fulfilling sound I’ve grown to love.

Tread Lightly – Once More ‘Round the Sun

Chimes At Midnight – Once More ‘Round the Sun

The Last Baron – Crack the Skye

Porcupine Tree are one of those bands who never got quite the attention they deserved. Really, what they deserved was the sort of attention Pink Floyd got. Seriously, Porcupine Tree, in my opinion, are the kings of prog rock — they can get pretty heavy too. Also, man is Gavin Harrison great. If you’re a prog fan, and you haven’t heard of this band before, listen to them now (preferably Arriving Somewhere But Not Here).

Arriving Somewhere But Not Here – Deadwing

Anesthetize – Fear of a Blank Planet

I’ve talked about The Mars Volta a few times already on this site, but they deserve the mentions I’ve been giving them. I described Goliath before as a prog punk metal jazz fusion funk djent hardcore alternative art steampunk rock song, to be honest, though, all it really is is prog punk metal jazz fusion funk rock, the rest were made up — shock horror. As a band they had an incredible musical range and an immense energy and volume in everything they did, as even their slowest album, Octahedron, is full of fantastic high energy prog rock. Omar Rodriguez Lopes and Cedric Bixler-Zavala were really the brains behind this, and the band’s driving force, from Cedric’s mental vocals to Omar’s incredible guitar work. But the late Ikey Owens didn’t get enough credit for his influence on the music. Not only was his keyboard work insane, but it was his energy was really the driving force for madness like The Bedlam In Goliath, which will always be one of my favourite albums. But I guess The Mars Volta need to be heard to be believed.

Goliath – The Bedlam in Goliath

Agadez – The Bedlam in Goliath

Amazing bands that didn’t quite make it:

SOiL (sad about removing this one)

At the Drive In

ANOTHER mention of Red Hot Chili Peppers. ANOTHER number one spot for Red Hot Chili Peppers. There must be a reason, surely? Of course there is! It’s because they’re the best damn band around. Sorry, Mars Volta, but I guess the only real reason these guys are ahead of you is because they have more material than you. Yeah, that’s how close The Mars Volta are to being the best damn band around. But Red Hot Chili Peppers really are the best. It is a great achievement for a band that their worst album (I’m With You) I’d say is still good, and every other album is amazing, from the super funky Mother’s Milk to Blood Sugar Sex Magik, THE best album ever, to Stadium Arcadium, which really throws up nostalgia, along with being a brilliant album. They’ve had so much funk down the years, so much Californias, North Dekotas and New Yorks. So much awesome bass, so much great vocals, drums and guitar – the best guitar from ol’ John Frusciante. I’m just hoping The Getaway sees a return to their former quality.

Around the World – Californication