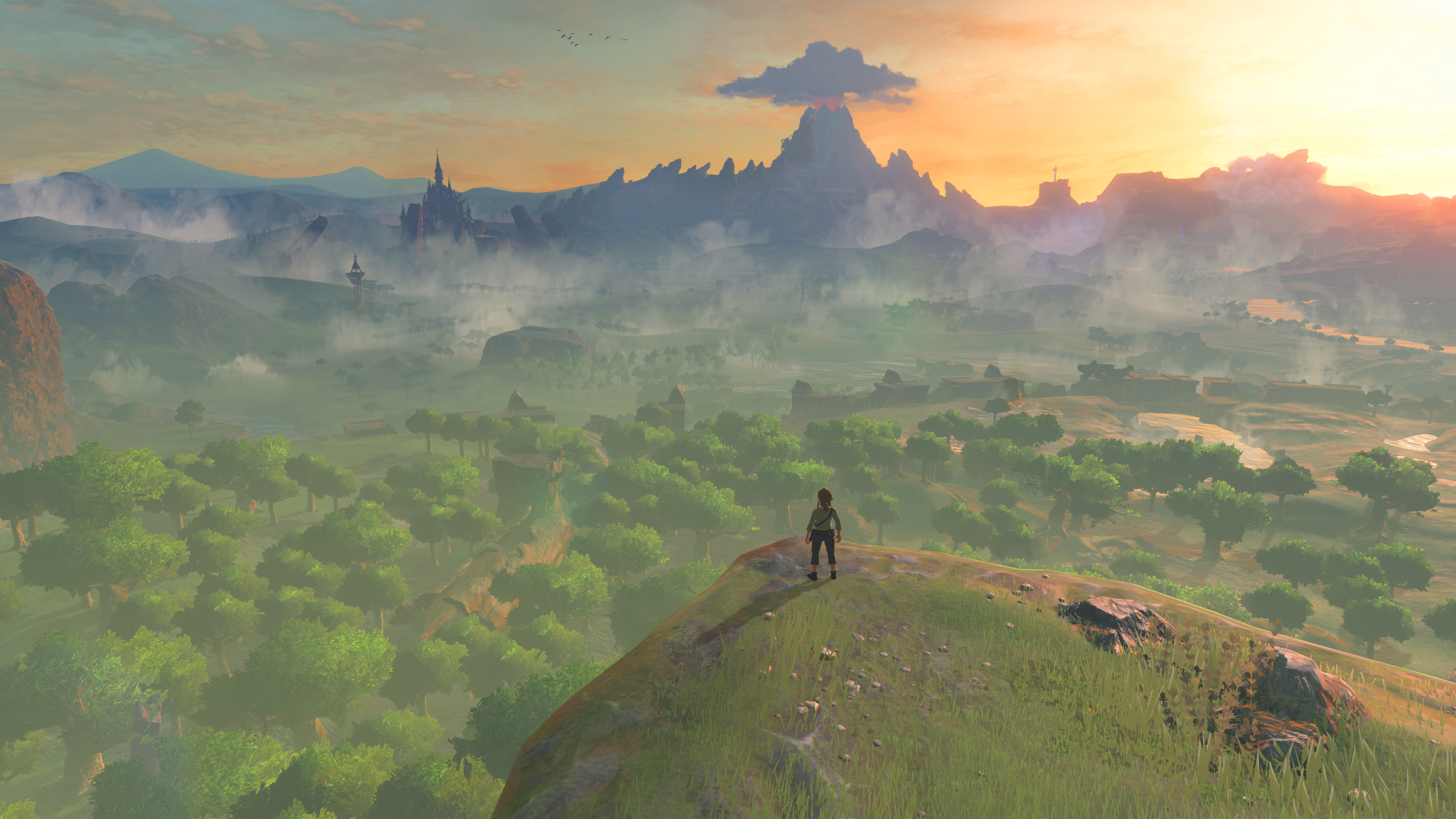 What about dat E3, den? Yeah, that happened. This week, in fact. I thought I might as well do a lil’ article about it. This won’t be an information thing totally like Neat Games This Month, but mostly an opinion ting on the things I found interesting in E3. The three things I mentioned in the title will all turn up in this article, but I’ll talk about a fair amount more too. So here we go.

In the midst of Nintendo’s boring Treehouse Live at E3 in the week was what looks like quite possibly the best game of all time. Zelda: Breath of the Wild is the best E3 announcement since  the reveal of the 3DS, personally, and I can’t wait to play it. It seems like Nintendo’s most ambitious title in years as it gives gamers what looks like incredible freedom and opportunity for exploration in a huge world, which looks beautiful to boot. I watched Horizon: Zero Dawn and God of War PS4 beforehand thinking the graphics looked fantastic, but this new Zelda absolutely blew me away. Sure, it’s not realistic, but it is brilliantly stylised and the cute cel-shading works wonders for what looks like a wonderful experience as a game.

I’m not too experienced with Zelda games myself. I mean, when I was about ten I played some Wind Waker and Ocarina of Time on the Gamecube – and sucked, horribly – and have since got Tri-Force Heroes for the 3DS to ease myself into the series now that I think I’m ready. Hopefully I get a chance to play Breath of the Wild, because not only does it look like a great Zelda game, but it seems like its bringing a lot new to the series, with influences ranging from Monster Hunter, Skyrim and Dark Souls; making it deeper than ever. Hopefully this game will make people realise how capable Nintendo really are, after some years of under-appreciation.

FIFA 17: The Journey is the Weird-Ass Thing FIFA Needs

This was the first announcement that I heard from E3, and the strangest. The Journey is a weird new story mode that they worked with Bioware to create for FIFA 17 – a game that EA was inevitably going to show in their presentation. The new mode got a dramatic and frankly ridiculous trailer in EA’s conference which shows off Alex Hunter douchin’ around Old Trafford with a disconcertingly slightly off Jose Mourinho on the sidelines – whilst the changes with the Frostbite engine are shown off a little more. Genuinely, I think this stupid new story mode could be exactly what FIFA needs as a series. It’s been a bit stale in recent years, as less and less assets have set yearly releases apart, and the licensing is pretty much the only thing it has over Konami’s PES at the moment – a series that’s putting up quite a fight for the football game throne — something EA need to equal to keep its top spot. Although the introduction of a new engine in Frostbite is a huge step in doing this, it needs some help from some more innovations. The Journey is exactly that. A big part of NBA 2K games’ success is that there is a solid story mode which sets it apart from NBA Live; so you’d think if EA did a similar thing with FIFA it could set it apart from PES.

I honestly think that the ridiculous aspect of the mode might bring extra commercial success to the game, as it might just bring some people not even into football that much — something that football games in their ultra-realism struggle to do nowadays. Also, it might well make me stick with the series, unless Konami do anything more outrageous. This announcement, oddly, was one of my highlights of E3 2016.

I’m gonna ask a question. Does anyone really care about VR? I really, really don’t. It looks so expensive, so overblown, and it doesn’t look fun. It also doesn’t exactly promote talking to people or even acknowledging people, whilst multi-player isn’t really possible, is it. It’s very expensive for one head set, let alone four. Also, in the scenario that multi-player is played – like in that crap looking Star Trek virtual reality game; how do you communicate with who you’re playing with? And what happens in the event of a fire? I mean, it might be very impressive for a few hours, but I think Playstation VR will end up being an overpriced piece of clap-trap.

The sections of the presentations where VR was mentioned were overwhelmingly skippable. Unfortunately, they took a fair amount of time. Looking at you, Ubisoft.

Horizon: Zero Dawn – Sony’s Breath of the Too Gooooooooood!!

Although Horizon looks slightly less colourful than it did in E3 2015, it still looks real nice. Aside from visuals, it’s shaping up to be a great game. Running around some crazy land infested with robot dinosaurs looks cool, although the running commentary may mar it slightly – but I don’t think I’ll actually be bothered by it. Horizon: Zero Dawn, after all, was my favourite game at E3 until Zelda came around and stole the show, causing Sony President Kazuo Hirai to openly say he can’t wait to play it and it reminds him of Horizon – but maybe better — although he didn’t say that. I reckon it’ll be the best PS4 game yet.

There was no gameplay for Crash Bandicoot for the Remastered Trilogy, but they did announce it, and I think it’s good news. I’ve never been a fan as such of the series but I have fond-ish memories of a couple of the games on the Gamecube. I, for one, am quite glad to see one of these classic 90’s icons back in the games industry, even if the games aren’t that good. It’s just a refreshing change. I’m looking forward to seeing footage of it, and at the moment I’d say I want it.

Pokémon Sun and Moon Are Shaping Up Nicely

Pokémon Sun and Moon, most likely the series’ last shabam on the 3DS, are indeed shaping up nicely. Very nicely, in fact. The 3D graphics introduced in X and Y seem to be brought to life in the new entries, as this world looks more impressive and immersive than any before it. Some new Pokémon such as Yangoose and Pikipek were also shown in its coverage, the new Pokémon designs looking as good as ever. The Hawaii theme also opens up some more clourfulness and interesting landscapes in the game, which is very welcome; and the Battle Royal looks like a breath of fresh air for the series.

New Spider-Man Game By Who? Insomniac!?

No, I’m not baffled or confused by this announcement, I am pleased and excited. After its reveal in Sony’s press conference, I have been pretty excited for the future Insomniac-made Spider-Man game. A return of Spider-Man to our consoles aside from film games is great news, and it will be great to see what exactly the Ratchet & Clank developers will do with it. The reveal also reminded me that I should play Shattered Dimensions.

Death Stranding looks ayt. But I think I’m one of the only ones who doesn’t really care about it. David’s a little bit excited. (Excuse the language…)

Looks more ayt. The trailer impressed me, and the changes to Kratos’ character are more than welcome. I might play it at some point. The battle scene certainly looks impressive.

Xbox One S: I Care So Much

Microsoft went and announced the new hardware, and didn’t specify exactly what it is. Sony, on the other hand, have announced that PS4K or whatever it is is basically a PS4 equivalent to a DS Lite or a New 3DS. Microsoft haven’t. What dinguses.

Injustice 2: What Batman v Superman: Dawn of Justice Should Have Been

We all know that Injustice 2 is going to be a decent fighting game, at least, and we’d guess a pretty brutal one at that. Zack Snyder and his bunch should have just left Batman v Superman to NeverRealm Studios. Even though this game doesn’t look like that much of an upgrade on the first Injustice game, it’ll be fun.

A fair amount of plebs probably said this particular new shooter was their favourite game of E3. People can have their opinions, but sheeeesh! Did you see Zelda? I may be a slight Nintendrone but I think Battlefield 1 looks a bit boring. Sure, they’re bringing back the good ol’ days of FPS’ with the return of World War I — but wasn’t that sort of in bad taste to start with? Also, I know it’ll be like Star Wars Battlefront. Fun but bland. In fact, I don’t doubt the gameplay will be good. I just don’t think the game looks particularly original or exciting. EA, many times in the past, have proven their lack of ability when it comes to presentation.

There’s all I’ll write about in any detail. Have some more interpretations:

Man, Watch Dogs 2 Guy is a Douche – and So Many People Say He’s Great

Titanfall 2 Actually Has Single Player! I Might Want it. Possibly.

Call of Duty: Infinite Warfare Looks Better Than A Lot of People Are Saying

Where Was Rayman, May I Ask?