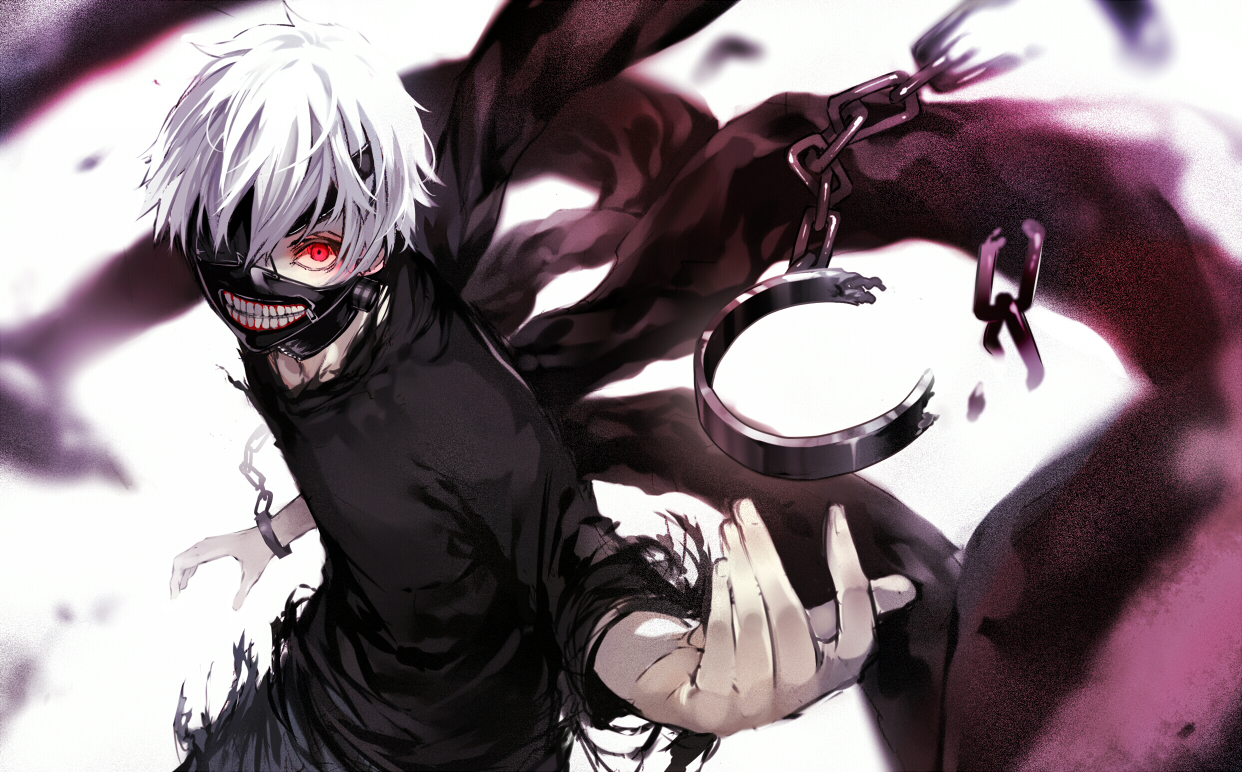 My last anime review wasn’t about a mainstream anime and for good reason. A majority of mainstream anime, in my opinion, are pretty crap. There’s always something better deep down somewhere in the internet. Tokyo Ghoul is an exception.

I heard about this one a while ago, but I delayed watching it until recently. I had no idea what to expect from it. To be honest I had no idea what was going on most of the time I was watching it. But here’s my best attempt at explaining it. In the show there are ghouls and there are humans, and ghouls have a strange craving for human flesh – and no, they aren’t zombies. They each have their own unique Kagune, which is basically a weapon that grows out of their body. Humans retaliate against the ghoul threat by training detectives to hunt and kill ghouls. The main character is dragged into the ghoul life when he gets an emergency organ transplant with a ghoul’s organ, making him a one eyed ghoul. Those dinguses are pretty rare, and pretty dangerous. 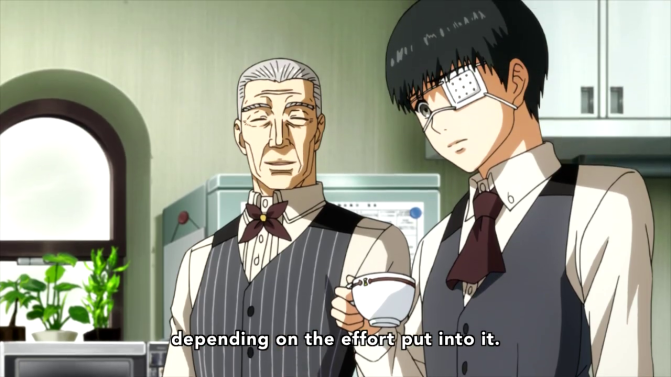 I’ll be honest, at the start I didn’t like this show too much. A lot happened rapidly in the first episode, and for multiple episodes after it was really slow. Too much time was spent with Kaneki freaking out about the fact that he was a ghoul. The most painful part has to be watching Kaneki, time and time again, getting his ass handed to him by other ghouls. Kaneki has no idea how to control his powers or how to fight, but luckily enough he gets taken in by some hipsters at a café. They teach him the ropes, but he’s still basically useless. It was just quite annoying watching him get destroyed by everything, to the extent that I ended up literally shouting at my computer screen every time he was being useless. In fact it takes him an entire season to immerse in the ghoul world. But when he does, he’s the most badass thing you have ever seen. I screamed so loud when he fought the final battle of Season 1, but admittedly the build up may have been worth it just for those few minutes. It took for the guy to get tortured to realise he should fight back. And somehow miraculously his hair changed colour. He just wants to look like Bell Cranel from Dan Machi.

The characters in Tokyo Ghoul are alright I guess, but it kind of sucks that Kaneki goes from being kind but useless to a badass jerk. Once he gets strong he changes personality. So no more Mr Nice Guy fellas. The other characters like Touka are alright but we don’t really know too much about them. There was also a romance-y thing that not everyone was sure about. Literally everyone that watched the show was wondering if Touka liked Kaneki, but I think that its more or less impossible for that to happen in upcoming seasons now. Aside from the issues, one thing I really loved about the show was that you also have the detective side of the story, and that’s actually really cool. One of the best moments is always when a ghoul character that you like and a detective that you like meet. The detectives were actually kinda dicks but at least some of them had personalities, as weird as some may be.

I really do love the action and combat in this show, but it would be nothing without the tragedy element. It’s always sad when a character you like or that is innocent and gets murdered by detectives. No joke, detectives kill little ghoul children that are no threat whatsoever. Whatever, though. The sinister feel between the detectives and ghouls works really well. They do a great job of making scenes better with the music, too. The music during epic action and sad scenes is brilliant, and pretty atmospheric. Even the darn intro is catchy, and its not even in English so I don’t understand a word of it. They definitely make everything much more hyped through music and shouting which may be why that fight at the end of Season 1 is so damn good.

The art style and colour pallet in this show is not bad either. A tone darker than most anime perhaps because there is a lot of black and red. The majority of fights happen at night, and the ghoul weapons are usually red. The animations during battles are very fluent and very badass – something I very much appreciate. I would usually complain about a dark colour pallet but it suits this show just fine.

So overall besides that one meme about the counting failure in the dub, the annoying build-up with the protagonist and lack of particularly strong characters, Tokyo Ghoul is pretty good. All is forgiven for with that fight at the end of Season 1. I know I keep bringing that fight up, but I’ve seen a lot of anime and a lot of fight scenes but none are better than that one. This anime is actually most likely going to see a Season 3 in the future, so that’s something to look forward to.

Anyway I’m going to go barricade my door, I think my sister may be a ghoul. I just heard her crack her knuckles like Jason.