This is a Warframe review. Or should I say, the grind simulator, from the time I am writing this, Warframe has changed quite a bit and I’m writing while update ‘Specters of the Rail’ is out. And, by the way, I’m not writing a review of this update. Anyways, if you don’t like grinding then you best look at some other reviews but if you like to have fun and be a space ninja and do things your own way, then see what I’ve gotta say about Warframe. (Note: Warframe is a huge game, I will not be able to justify everything in this review)

What is a Warframe?

Warframe is essentially a sort of gear collector game, and the objective is to have everything. Well, everything you want, that is. Now the thing you need to know what the absolute hell you are doing, before going on your space ninja adventures. Unfortunately this ain’t no ‘Warframe 101’, this is a review, you must know that! The core of Warframe is the idea of going out on missions with up to 4 people in a squad, which makes for a unique experience with varying mission to suit your gameplay style. Combine this with AWESOME PARKOUR mechanics like being able to leap across a whole room blasting your foes into dust, and you pretty much have yourself Warframe. Before I continue I must mention that Warframe has one of the best business models and that a “free to play” player will be able to acquire everything they want, just incase the game already sounded like a pay to win.

The gameplay in my opinion ought to be quite addictive. Starting out, it may be a bit hard to complete a mission solo, but gradually as you grind and become stronger you’ll be completing levels and doing speed runs. You play from a 3rd Person perspective and you control a Warframe, which will have 4 abilities. All Warframes are unique and have different abilities each into their own. This provides variety, as certain Warframes will be more useful in certain missions than others. Variety is the spice of life, after all! There are a ground pounding amount of weapons to collect whether it would be melee, secondary or primary. A fluid Parkour system is in place, which is what I love, as I find too many games or any big multiplayer titles lacking with ‘fun’ movement. Back to the game, you complete nodes to unlock the next node, until you arrive at a Junction. The Junction will give you a task of things to complete before you are able to move to the next planet, essentially a higher tier place. Each planet has different materials you are able to collect. Now this is important. You will need certain materials to CRAFT the things you want, now for free to play players entering the market will be overwhelming. There are 2 currencies in the game, credits which is the typical in-game money, and platinum which are micro transactions. NOW as a free to play player you can STILL acquire platinum without spending a single real dime, through the arts of trading. You can get any weapon by buying the BLUEPRINT for credits, BUY the blueprints, not the actual weapon, as the actual weapon costs platinum and you start off with 50 as a new player. So many new players fall into this trap and due to a lack of guidance from the game (outside its story quest) –  which is quite the scumbag move. Every new thing you create, whether it be a Warframe, weapon, companion or whatever it will start unranked. And you need to grind EVEN more to make the weapon rank 30, max rank. Here, you will be able to add mods to those weapons, mods are modifications you add to your weapon such as extra damage, faster reload, that’s the jest of it but in reality it’s much more complicated to explain all of it. Now, you have a mastery rank which needs to go up in order to achieve the higher end game items. To rank this up, is simple. Make stuff, level that stuff up, and that xp from the stuff goes on to your mastery rank. I think this should wrap up the core of the game…. in the most simplest terms to explain.

In simple terms, there’s a lot of grinding and a fair amount of knowledge needed, but once you get to grips with its system, Warframe can be really fun with its fluid parkour gunplay and whatnot. 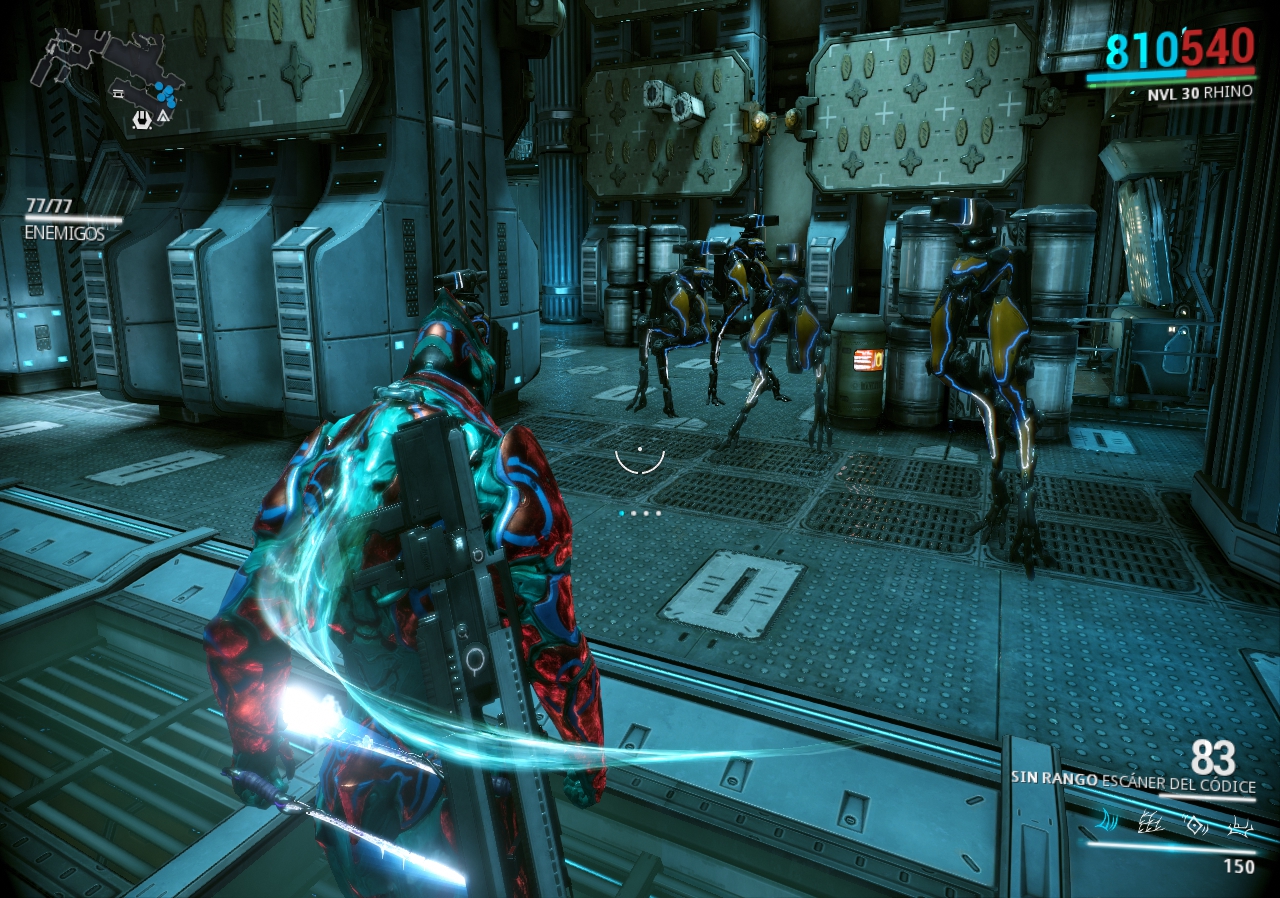 Warframe has a metallic sort of aesthetic look to it. The enemies can be easily distinguished from which factions they belong to. The game actually looks really nice – the metallic tone suiting it well. Even at the lowest settings the game still looks decent and not like an absolute potato.

You can get this on the latest consoles but, I am doing a PC review.

As you can see, you do need a decent PC to run this game.

You spend money to get plat, but you can trade things for plat. So it’s up to you how you acquire plat but you DO need it, as there are limited inventory spaces you have, and you need to use plat to buy extra slots. So the game has a theme of, if you have money, but not the time, you can buy what you need. But if you have the time and not the money, then you can earn what you want. Simple but that’s view this whole concept. It can be slightly scumbag-y, but the business model’s flexibility works nicely. (Tip, you get daily login rewards. So wait till you get a plat discount to purchase plat, it’ll be worth it, trust me.)

I feel as if I didn’t go into great detail of the Warframe actual gameplay, so I’m planning to write a whole review section for that because I do think it needs recognition. So I’ll post the link once I’ve completed it. Right, Warframe. Now you can see why people sometimes refer to it as grindframe. Sometimes the game does feel like an endless grind but, it’s what you make of the game. It can be very fun, and I’ve spent way too much time on it. The community of Warframe is the highlight for me, so join a clan, meet people and have a blast (giggidy).

With love from yo boy! Emmanuel.