Another spooky film, eh? At least it’s not another top ten.

Indeed, last night I watched The Exorcist, “the scariest film ever made”. It was alright, pretty spooks. If you’ve seen, played or maybe even tasted a “jump scare” video or game, you’d probably seen this lil’ minx: 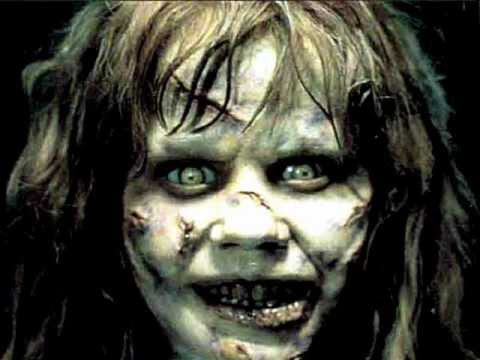 You have The Exorcist to thank for that shizzle. The lil’ minx in question is Regan MacNeil, our possessee. She is occupied throughout the film by Pazuzu who, contrary to the name, isn’t a magician, which is a disappointment, and rather the devil himself, so he’s a lovely character. However, the film centers on Ellen Burstyn as Regan’s mother, Chris, who drives the film’s emotional attachment as well as providing a voice of reason but, Jesus Christ, is she bloody annoying.

The beginning of the film seems unrelated to the rest, as we see some old guy look at a statue of a demon with its demon wang out in the desert for what felt like 10 minutes. Needless to say, I was shaking in my little cotton socks. Then we see an adorable little girl do some adorable little girl things, so far, so seventies-fringes and the like, nothing too weird. However, when the Ouija, or Weejee, boards come out, you know shizzles gettin’ rizzles. That is exactly what happens and we get some odd occurrings from that point onwards.

Though the lead actress is Burstyn, the star of the show is most obviously Linda Blair as Regan, who put in one of the best child performances I’ve had the pleasure of seeing. The transformation and character arch that happens throughout the film was a joy to watch. As normal, demon-free Regan, she is the pure picture of innocence, being surprisingly likable to someone who hates kids in films. This makes it all the more effective when we hear the same little girl say such beautiful, poetic lines, such as “Your mother sucks cocks in Hell.” Ah, lovely. Joking aside, she is equally as brilliant demoned-up Regan, and, although the excellent, and I mean excellent, vocal performance was Mercedes McCambridge, there was a great and surprising amount of, I don’t want to say “laughs” because you might the wrong idea about the film, but definitely entertainment. This was unfortunately, or fortunately, if you think about it, helped by the dated dubbing techniques that gave the film an unintentional Tongan Ninja feel about it.

I doubt this was what Dead or Alive was singing about.

However, don’t you be getting the wrong idea about this sucker, this ain’t no comedy, intentionally or otherwise.

Though some of the vulgar things Pazuzu says did make me giggle, I’m a 15-year old boy, of course I’m gonna laugh at that. It’s obvious this film is horror, however, very obvious.

The most notable thing about the horror elements was not only some of the sacrilegious imagery and disturbingly perverse scenes, considering the subject was a 12-year old girl, but also, and I’m getting technical now, the lighting and editing. Oh and this creepy fella:

Luxury Facials are only £40 at Samantha White Beauty.

This sucker, the aforementioned Pazuzu, is the source of most scares in the film, for me. This isn’t due to his face, though, it’s how he appears. You only see Pazuzu for a total of maybe 3, 4, 5 times in the film and it’s only for literally a split-second. I really mean split-second as well, I tried pausing the film to get a good look at him and I just wasn’t fast enough. This was subliminal messaging type quickness. This was a great technique for scares, from a filmmaker’s point of view, because it meant you only saw him for a very brief moment leading to you imagining what you didn’t see and making you question if actually just saw something, or if you’re just going flippin’ mental. I applaud you, I really do.

Pardon the watermarks, good gifs are a bugger to find.

On top of this, we had, what I’d call, violent editing. Very sharp cutting going on here, as well as our good ol’ friend the lingering shot making a few appearances to build up a bit o’ the tension. Add in an iconically creepy soundtrack and you’ve got me feel all kinds of uncomfortable, eurgh.

However, where there are some great performances in Linda Blair and Jason Miller, who plays our Exorcist in question, there are a few crap ones in my opinion. Ellen Burstyn, who plays Regan’s mother, was fine up until she started being a bit of a bitch. I found she suffered from Shelley Duval syndrome in that I was wishing for her to just die, she was so annoying. Her interactions with people that, remember, are trying to help her are just so grating. By the end of the film, I was happy they exorcised her daughter, so she could stop bloody whining.

On top of this, we had a perfectly tolerable but ultimately useless performance from Lee J. Cobb as police lieutenant William Kinderman, but we’ll call him Willy for comedic purposes. His performance was fine apart from the fact that he didn’t do anything but talk about a murder, which was admittedly, moderately essential to the plot, but then he just asked people if they want to go to the cinema with him. If it was some in-joke, I didn’t get it.

Finally, the practical effects were obviously a product of their time and, while Regan vomiting did make me jump a little bit, they were mainly comedic for me. I realise that this is no fault of the films and I won’t score it down because of it, but it was a bit of a mood killer.

Overall, The Exorcist was a scary film, especially for such an old one. A great child performance and some extremely intelligent film making were the two stand outs for me, while a couple of dud perfomances got on my tits a little.