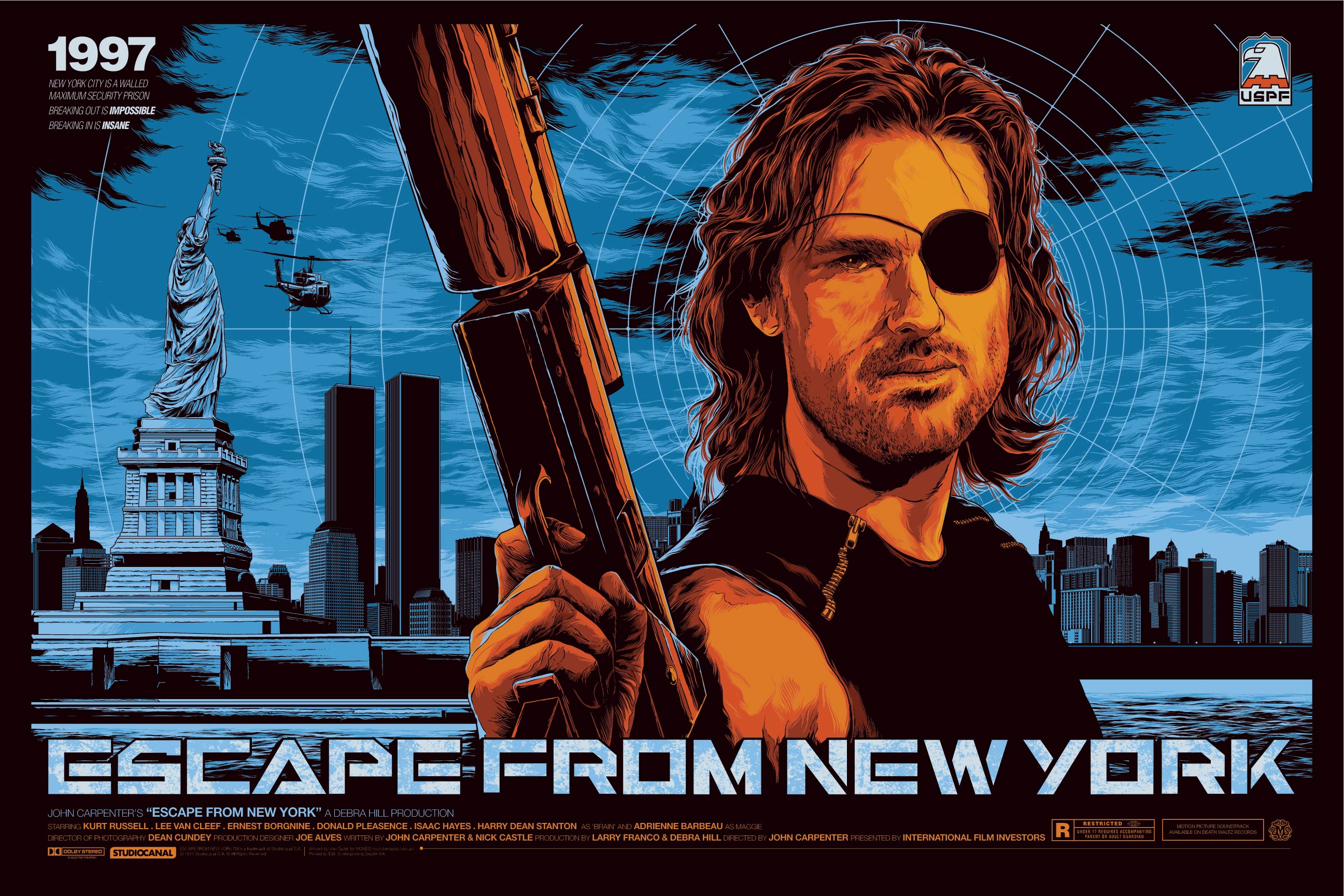 Yo, this be Reuben. You’ve probably heard of Snake Plissken, right? You know, that guy with the eye-patch. Solid Snake? From Metal Gear Solid? Yeah, basically the same guy. This particular bloke is the protagonist of Escape From New York, one of the classic 80’s action films I mentioned in my Turbo Kid review (click it, you know you want to). It’s set 16 years in the future, the far-out year of 1997 – weird to think that I wasn’t born then – in a USA that saw a 400% increase in crime-rate and so had Manhattan made into effectively a massive prison, where criminals who enter are there for life, in the society that they have built.

Snake Plissken happens to be a convicted bank robber, and is sent to the giant prison for life for his crime. However, when the President crash lands in the heart of the island, Snake is sent in (as a former war hero) to bring him back in time for an important TV conference. That’s all the story is, really. A simple one, but one that works, if only just because it throws Snake into the perfectly designed ghetto streets of New York. There is a sinister and dark undertone flowing through the ruined streets, as many urban dwellers run around in flashy and cave-man like outfits like a mixture between costumes in Streets of Rage and Golden Axe. These features coupled with flashing street lights and an electronic Mega Drive beat-em-up soundtrack make for a perfectly cheesy and overblown 80’s techno aesthetic. There is a constant 8-bit beat throughout the movie, giving it a tempo that really works. I wonder where Streets of Rage got its influence?

Nonetheless, the tempo is too slow, because there is a 22 HOUR TIME LIMIT, so of course Snake’s gonna take his time! There is too much of him just strolling around, and people sitting around, and people just generally doing things around — slowly. The soundtrack isn’t quite used to full effect, either, because the film is often just too quiet for my liking. Gun shots N that don’t have the effect they could have, too, because they’re so muffled. I guess this might be effected by the time it was made, but still, I’m sure I’ve heard better sound editing in films of its time.

More importantly, Snake Plissken is a douche. I know that’s kind of meant to be his thing, but still, and he’s definitely a dude, but he could be a little less annoying and growly. He doesn’t show off his fighting skills enough, either, which leads into another problem of the film. For a film with such a simple premise, a lot of action would really help the movie drive along. There just isn’t enough of it. There are some great moments, and whenever there is a bit of fisticuffs, it’s great fun, but it simply doesn’t happen enough. It’s partly made up for with its cool atmosphere, but Escape From New York can be a little boring.

Most of the rest of the cast of characters ain’t at all perfect, to boot. ‘Brain’ is a boring ass smart guy who doesn’t seem all that smart. Maggie is just there for the boobs, let’s face it. And Cabbie is just annoying and badly acted. The Duke knows what he’s doing though. He’s the big dawg. Just a shame he has about 10 minutes of screen time to his name. His right-hand man with the crazy hair is a big victim of lack of screen time, because he only gets about 5 minutes, which is a huge shame, because he’s one of the only interesting characters in the whole thing.

Regardless, the film’s whole shtick is pretty cool, and the world creation is on point. Also, the camerawork is pretty good, with some surprisingly ambitious shots.

Although Escape From New York has a spot-on and flashy 80’s aesthetic and some good moments, it falls fairly flat with paper thin characters (along with some underused characters) and the fact it’s just too darn slow and quiet.