There’s Gonna Be Shell To Pay…

35 years ago, Nintendo created a character that, though in his first installment was nameless, would go on to characterize the video game industry, putting a face to all the silly games we would play. Go on to spawn a platforming franchise, a kart-racing franchise, a golf game, a tennis game, a football game, a goat-sacrificing game, an IT development game etc. etc. OK, maybe those last two were fake. That character is, of course, PEPSIMA– Mario, it’s Mario.

As well as forefronting the platforming genre, Mario has also spawned the Mario Kart games, which has remained one of the most entertaining, friendship-ruining franchises since the SNES days, with the release of Super Mario Kart.

The secret to its longevity lies in its ability to constantly re-invent itself with each installment. Double Dash (my favourite) had two racers per kart, Mario Kart Wii had its steering wheel peripheral, 7 introduced the admittedly gimmicky hang-gliding and underwater features. So, what does the latest, by latest I mean 2-years old, have to offer us?

Wait, this isn’t your game!

The gameplay of Mario Kart 8 very much sticks the tried and true formula that the Mario Kart Games have been following for the past 25 years. A cast of 24 of your favourite, and least favourite (f**k Baby Mario), Mario characters ignore the rules of sportsmanship and road safety in the meaningless pursuit of a mushroom-shaped trophy. The fast-paced (or slow-paced (but who the hell wants slow-paced?)) drift/weapon-heavy gameplay remains pretty unchanged for the most part, with the notable exception of low-gravity sections on tracks. While the hang-glider and underwater features of 7 merely pretended to add variety to the core gameplay, without altering it that much, these low-grav sections really spice up the races for me, making you focus on the courses and adding a layer of freshness that was needed in the tracks, new and old. As for the other aspects of the racing gameplay, as I said, it’s pretty much unchanged from the last instalment, your standard MK racing, brilliant. That wasn’t a sarcastic brilliant, but a brilliant brilliant.

The single player mode contains four game types, with not too much variety within. You have Grand Prix, the progressible “story” mode in which you “Go for gold in a 4-race cup!”. Why change it? That’s a pretty good summary. This is where you’ll unlock characters, cups and customisable vehicle parts. The cups themselves are alright actually, you’ve got your four original-track cups, and your four retro-track cups, each with varied courses so you don’t get track fatigue. They’ve also slightly tweaked the retro tracks to accommodate the low-grav sections of the rest of the game, which can be seen as a good or bad thing, depending on your viewpoint. These can be played in 50cc, 100cc, 150cc, Mirror and 200cc, for all you breakneck hooligans out there. 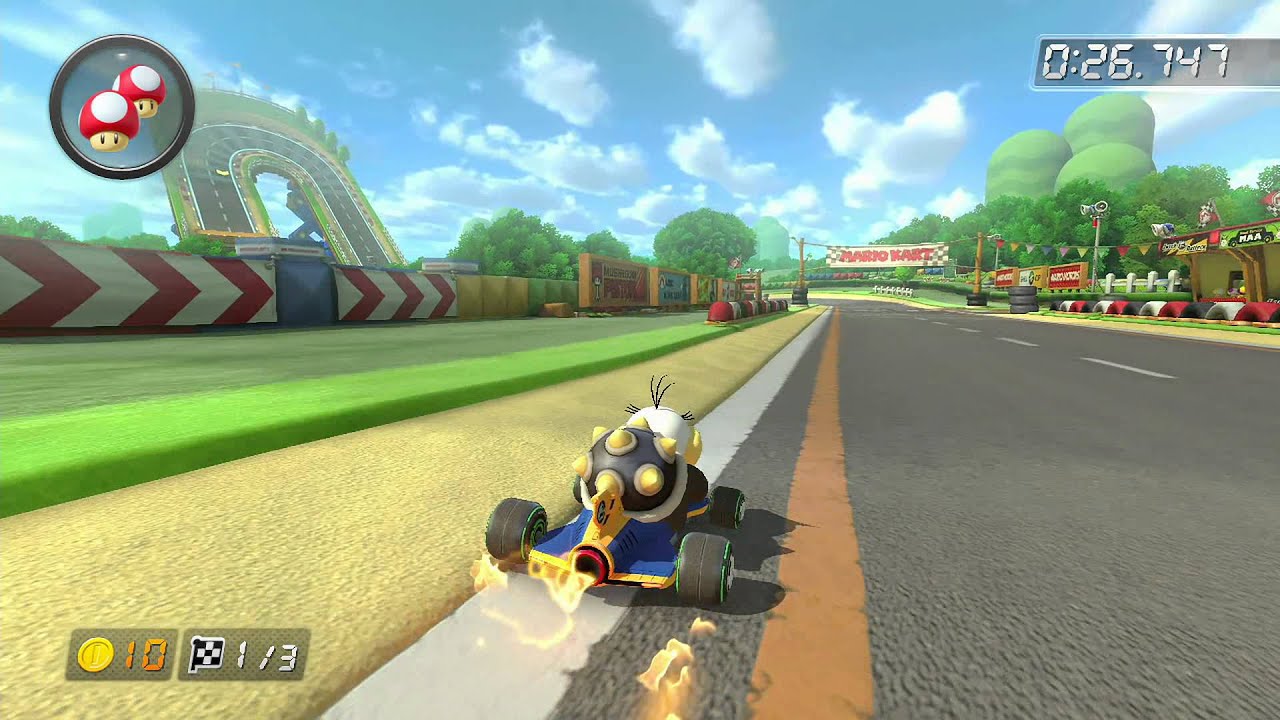 Then you have Time Trials, which is exactly what you’d expect, VS Race, a single player race with custom rules and Battle, which is a party game which involves each racer having three balloons and racing around a course, hunting each other down. I’m horrendous at it.

Multiplayer is a similar affair but without the Time Trails. As per with the Mario Kart games, local multiplayer really is where it’s at and, as with the single player, Nintendo have recognised this and made little changes to the winning formula, resulting in lots of giggles, arguments and my dad swearing at a blue shell.

For years, Nintendo have been dragging behind in the hotly-contested graphics race, with the Wii failing to even support HD graphics. However, they soon rectified this with the Wii U and it’s easy to see this in Mario Kart 8. Indeed, Nintendo have surely caught up, with their charming, cartoon graphics taking a crisp, clean look for the first time ever. On top of this, the extra detail included in the animation has not gone amiss either, with Mario’s mustache being unflappable in the facial animation department. The same can be said for the tracks, as well, with brilliant little bits n’ bobs being added into the scenery, really rounding off the whole experience.

On top of that, the soundtrack in this installment is the same jovial tunes as it has always been. It’s nothing too special, apart from one. Damn. Thing. The bass in the intro. Oh my God. Oh yes. Just… it’s worth it…

However, much like most games nowadays, there is a bit o’ the DLC. If you want to race as characters like Link and the Animal Crossing… uh… things, you’ll have to cough up a bit o the dolla, so that kinda sucks. In fact, there is a bit of free shizzle, though. For absolutely nothing, you can race in three Mercedes. That angers me more than it should.

Overall, Mario Kart 8 hasn’t really deviated from the MK formula in any notable way, so if you’re expecting a revolutionary racing masterpiece, go play Forza. Nevertheless, it retains all the fun from the previous installments while crisping up the graphics and adding in a few little goodies along the way. However, with that formula comes the same slightly unbalanced gameplay the series is known for, which can put off a “hardcore” audience, as well as the same gimmicky additions from MK 7 and some dumb DLCs, but those are small criticisms in an otherwise fun and accomplished kart racer.