Yo, this be Reuben. At the moment, I’m a relatively happy li’l man because Milo has refrained from throwing his shoe at my balls and another brick in the wall, although it is mock exam week, so, that’s fun… Guess I’ll let off some steam from that now with a nice li’l top ten. This particular top ten is a particularly meaningful one, because it represents a huge part of my childhood.

The Nintendo Gamecube was my first console, effectively, because even though I played a lot of Mega Drive and Dreamcast beforehand, I never properly started ‘gaming’ until I managed to wangle a Gamecube and telly downstars into my little set-up where I now have the nice ol’ Gamecube, PS3 and dat PS4 which I spend most of my depressing existent losing Rocket League on. Before the days of Sony, I was a Nintendo kid, and that remains mostly true today, as I do play a lot of dat Nintendo lark.

It’s gonna be hard to leave a couple of the games I’m leaving out out, but I guess I’ll have to – don’t wanna write a top 12, do I. These following ten games shaped what games I’ve played since, and represent some of the most fun I’ve ever had playing games. And remember, these were honest, pure times when games were probably better.

Classic! This particular WarioWare has always held a place in my heart as the funnest multi-player party game, and for good reason. It houses an abundance of ridiculous mini-games and stupid controls, often asking you to play with your toes, your tongue or your chin, as you desperately attempt to get some points against whoever the hell’s Jimmy, because I’m sure he’s always celebrating. Although it isn’t the most technically advanced or groundbreaking game the world has ever seen, it’s damn fun, and makes for some hilariously idiotic moments.

This game provides a classic case of nostalgia-itus, as it’s one of those games I just used to come back from school and play for hours, and hours, and hours… I’m using the phrase for good reason again, and for good reason, because Hit and Run is basically GTA, but Simpsons. It’s a mighty-morphin’, Buzz Cola drinkin’, time-killin’ machine.

I think you’ll all agree that Mario Sunshine is a classic. Let’s sweep aside the poor camera angles and inconsistent platforming, and remember this game’s awesome aesthetic, open-world and F.L.U.D.D goodness. There are so much places to explore and such a story to get stuck into, as this game gets the blend of open-world and linearity just right, so much great colours to see, so much fun bosses to fight, so much mini-games to play. A mad game, and kinda strange for a Mario, but such a great game.

Again, this is the possibly the most inconsistent and out of the ordinary game in its series, but it’s also the most endearing in its overtly wacky style and unique features, along with its collection of quality track and kart designs. I can see why some people don’t like Double Dash!! so much, but I can also see why Milo says it’s his favourite: its handling is ridiculous making drifting super-hard because you always seem to veer to the very edge of the stage, and items have minimal effect on the game, but it’s possibly the most fun and in your face Mario Kart because of those flaws – it’s got a great soundtrack to boot. It may not be as perfect as Mario Kart 8, but it’s probably more fun.

Even though I’d probably say Super Monkey Ball 2 is a more well-rounded game, this original installment somehow possesses that bit more charm, and is the more innovative of the two in that it was the first game to do what it did. It’s perfect as a two-player piece of fun with its brilliant simplicity and progressing difficulty. Plus, it’s got the guitar string stage — who doesn’t want that? 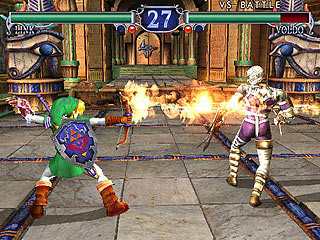 ‘Bout time we had a fighter here, ain’t it? No other one-on-one fighter could come close, surely? Well, I guess there are a few (Street Fighter II, IV and Dead or Alive 3), but that’s by the by. Soulcalibur II, along with being a Nostalgia-Mobile Deluxe 2002, is one of the simplest, funnest and addictive fighters to this day, with one of the best character rosters and an amazing selection of single-player modes to choose from. Also, if you don’t do this, you’re probably not good at the game, just sayn’.

Of course this had to be in here. Admittedly, this particular Smash Bros. is probably the worst I’ve played (not including the original on the N64), although I might offend many by saying that, and all three of the games I’ve played are incredibly closely matched. For nostalgia ratings, this comes toe-to-toe with Brawl, for charm, it might just win, for its game modes, it’s just behind Smash Wii U, but for its clunky and heavy gameplay, it’s gotta come out bottom. Saying that, it’s pretty damn terrific, and to beat Soul Calibur II is quite some feet. Without its glorious original soundtrack, it might have finished behind. *GASP*

We were already in the big leagues, now we’re in the MAH-HUSSIVE leagues. Prepare!

This is about as ‘Ghetto Blastin’ as Jet Set Radio and possibly an even better game. I mean, based on closeness to my heart as a brother, it beats it.

Horse mode, all those other modes I forget the names of, they were what I spent my existence losing on back in 2008. Sure, my brothers were probably smug that they were pulling off 900 hardflips, but I was happy with doing the ollies, thank you very much.

I think I actually got pretty good at it after playing it after 300+ hours, though, or at least I hope I did!

Now this I did get good at! Think I got S rank on every Sonic/Shadow stage other than that damn Crazy Gadget. If you think I had a soft-spot for Pro Skater 4, that was nothing compared to how much I used to dream about this.

Now, on reflection, this game was a bit horribly inconsistent. I mean, the Tails/Robotnik stages were okay, but the Knuckles/Rouge stages sucked so much they thought gone-off mints would improve their breath. Even so, the Sonic/Shadow stages were amazing. Fast-paced, imaginative platforming, with all the Sonic quirks you’d want. They’re pure Sega bliss, and if I did want to pick fault at them, I couldn’t bring myself to it. There’s also a genuinely unforgettable soundtrack to go with the game, along with a damn good story.

I was properly obsessed with this game.

What kind of glorious masterwork could number one be? The Wind Waker, Resident Evil IV? … Gotcha Force?

Some may say that this game is flawed. I’ll probably go, “Yeah, but…….” And say some sort of crap about how I was hopelessly addicted to this game and completed it nine times (I think) from the age of about four to twelve. So much good memories, so much fun single-player and multi-player goodies, so much obnoxious music and voice-acting. This may not seem like a masterpiece to some, but, take it as it is, and you will have incredible fun with it’s no nonsense and non-stop, action-packed gameplay, as you’ll probably fall in love with that wacky simplicity that so wooed me.

Well, I was only four when it did that, so I dunno.