As you’ll know from my voluptuous figure and overall “cannot-be-assed” attitude to life, I’m no hot stuff when it comes to the athletic scene. So, it’s a good thing that I can disguise this self-disgust whenever I pick up my controller and pop on a “sports” game.

I could be a skilled football (that’s the real football, not the glorified rugby across the pond (I don’t know what I’m talking about (Please don’t hurt me))) player, a basketballer, golfer or, any kids dream, table tennis player. But screw that poncy crap, let’s carve some wood.

…by which I mean grind some rails.

…by which I mean do a skateboarding.

Now, I’m sure when I bring up the phrase “skateboarding” and stick “games” on the back end of it, your attention will immediately be drawn to the Tony Hawk franchise, as it was that franchise that capitalized on the skateboarding boom of the of the late 90s/early 00s, when you could listen to Sum 41 and say “rad” without being ridiculed and, most likely, especially if I’m about, brutally murdered; what a time to be alive. The Tony Hawk franchise had remained popular due to the pretty consistent quality the games have stuck to, that is, of course, until 2009, with RIDE and its godawful peripheral, and 2015 with the much-awaited Pro Skater 5 being also pretty lackluster from all accounts.

ANYWAY. I’m not even reviewing a Tony Hawk game, so why I’ve dedicated eight lines to it beats the hell out of me.

What I am reviewing, however, is Skate 3, the latest installment in the titular series, who have been slowly catching up to the Tony Hawk games, mainly due to the declining quality of that series and Skate 3’s extreme popularity with the online community, particularly YouTube, with many a “LOL Compilation Xd (Gone Sexual) (18+)” dedicated to it’s quote-on-quote “hilarious” glitches and the like.

God that was a long intro. 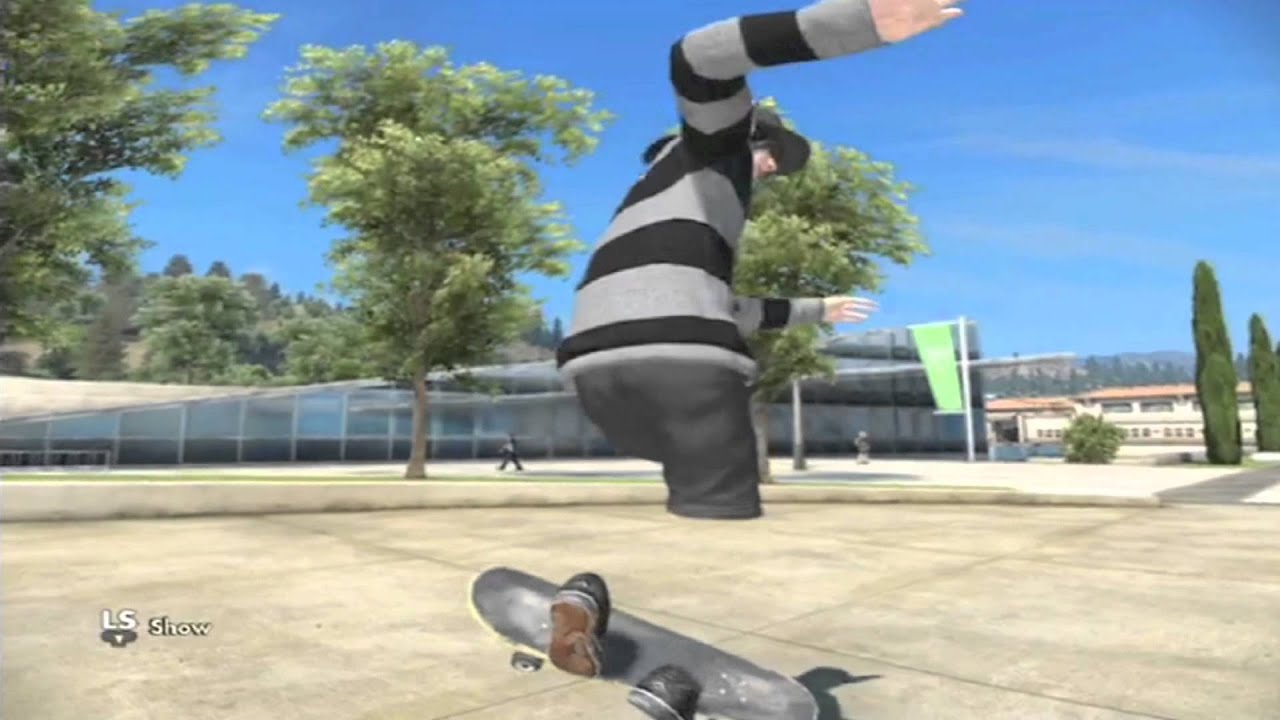 That glitch is so Xd random LOL that it almost, almost, fills the empty void that comes with being a lost personality on the internet. #Xd #randomLOLs #pleaseacceptme

Wow, that was a dark caption. Anywho, glitches isn’t all that Skate 3 is slappin’ on the table, as it also offers some solid, if flawed, skating gameplay mechanics.

On its own, the actual flips-n-tricks-centric gameplay of the game is alright. I mean that in terms of the concept is definitely there but, in practice, it can at times get a bit frustrating. The game relies heavily on the right stick and triggers, with the player flicking the right stick in a variety of different combinations to flip, and using the triggers and left stick to grab. Even so, it’s the flips on which the core gameplay is focused on, which is a bit of a down-point because the player isn’t even formally taught how to grab until the advanced, optional, tutorials that barely anyone even plays. On the whole, the flip system works pretty well, I’ll admit, but sometimes it plainly just doesn’t function, or requires apache-level precision to perform a simple kickflip, in my experience. I might just be a bit rubbish, though.

However, HOWEVER, what makes the gameplay seem worse than it probably is is the goddamn AI, and it’s insistence on getting in my way. I swear, I honestly don’t think I’ve shouted “DICKHEAD” more times in my gaming career than whenever Darren Navarette gets his dopey ass in my way when I’m trying to pull a pop-shuvit over a gap drop. God, I feel like I just grew a DC snapback out the top of my head. Seriously, though, this game’s AI, whether it be skater or pedestrian, is a serious dent on the game’s overall experience.

I guarantee some douchebag’s gonna ruin that handplant.

That being said, there is some kind of strange force that pulls me back every time I quit in anger, making me want to play it again, like heroin. However, the opiate in this case comes in the form of varied game modes and a fun world to explore.

There is an abundance of different modes in Skate 3, in which you can flip and flap with the best of ’em, including the aforementioned Navarette. Some of the highlights in the selection for me, however, were the deathraces, which are basically normal races, don’t know what the life-threat is about, and the adrenaline rush that came with ’em. The games of 1UP dispersed throughout were also plenty enjoyable as well, where you and another player can take turns trying to, you guessed it, 1-up the other, which lends itself to online play. However, I must say my favourites in the mix were indeed the Hall Of Meat challenges. Now, contrary to its name, the Hall Of Meat is NOT a celebration of male strippers, but a challenge to jump off of stuff and hope to mutilate your body in as gruesome manner as possible, lovely eh?

On top of that, the world in which you do all this stuff in, the town of Carverton (get it?), while it may not be pretty, is a lot of fun to explore. There is a wide range of different environments to wind your way through but, more importantly, there’s lots of big stuff to jump off of and lots of hills to go down, so don’t ya worry ya little heads about that side of tings. Notable places include that campus of Carverton university and The Super Mega Ultra Park, which may be one of the most fun places I’ve visited in any game, and shows that developers Black Box know their audience well.

I said before that this game ain’t pretty, and I wasn’t lying. Why would I lie to you? God, you sound like my wife…

While an obvious excuse is that the game is 6 years old, it still doesn’t make the graphics attractive, does it? I mean I can only look at faces that resemble melted cheese for so long before I get physically nauseous and you sure as hell don’t want me gettin’ physically nauseous, oh no. On top of that, it only takes a few seconds of idleness to notice the lack of quality in the surroundings, but again, that can be placed on the age. What can’t be placed on the age is the colour palette, however, which is as bland as dry spaghetti with nothing on. No, not even some grated parmesan.

Nevertheless, this does increase the comedic effect of the game’s character creator, which is capable of creating some of the most hideous monstrosities this side of Robin Stevens and if you got that reference, well done. This does compliment the game’s light tone, so don’t expect some sort of skating “journey”. That would be so lame, man.

So, it may not look too nice, but it sounds great. And by sounds, I mean soundtrack. It has a good soundtrack, K? With appearances from Pixies, with Debaser (a good song), Del The Funky Homosapian, known for his multiple Gorillaz features, and, my favourites, Them Crooked Vultures, or what happens when Josh Homme, Dave Grohl and John Paul Jones make beautiful, beautiful music together. All in all, good things to grind to.

I should reword that.

Overall, Skate 3 is good fun for, probably, a cheap price, by now. While the gameplay and graphics aren’t all there, there is a variety of good game modes and fine environments to do it in. However, don’t look at playing this as stress relief, as the simply bad AI will f**k you up. I’d suggest buying this if you can find it criminally cheap, as it has recently been made backwards compatible on the XBone, so have it, man. Keep in mind that it isn’t exactly polished though.

*Yes, yes, I know it’s December. Don’t fret, my Christmas movies and songs articles will be coming in a few weeks to get ya in the spirit, ya filthy animals*