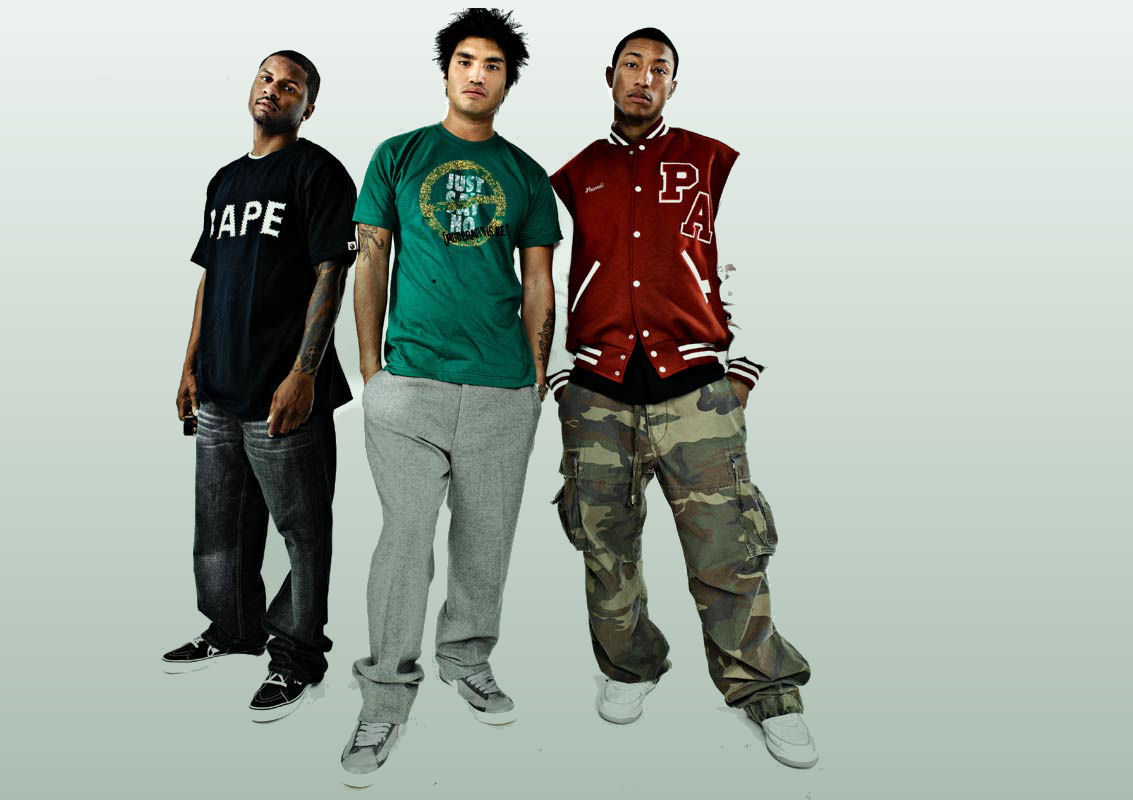 With almost exclusive music-based posts I’ve been writing for the past few months, it seems strange to think that I haven’t actually reviewed an album since December! I know, I know you’ve missed them.

Alter-ego of production duo The Neptunes, N*E*R*D were formed in 1999, consisting of aforementioned Neptunes pre-big hatted dickhead Pharrell Williams and Chad Hugo, as well as Shae Haley, who drops in, filling in necessary gaps here n’ there. While Williams & Hugo made their big bucks producing some of the catchiest mainstream hip-hop and R&B albums of the late 90s/early 00s, such as Kelis’ Kaleidoscope, the band’s music encompasses many genres, most notably funk rock and R&B. After their critically acclaimed debut In Search Of… established them as talented sons-of-bitches, it was left to Fly Or Die to reveal if they could match such a great album or, perhaps, better it.

Freshly hatched for your enjoyment.

The album kicks off on extremely strong footing with Don’t Worry About It. Hugo kicks off the song with one of the phatest, funkiest, filthiest riffs this side of Suck My Kiss, making fine way for Pharrell’s unashamedly seductive lyrics and delivery, as well providing a bouncy drum beat. Then you have a great hook (She’s badass) and a mellowed out chorus. Out of all the songs on the album, it’s the opener that perfectly balances the not-give-a-f*ck attitude of rock and the aura of the sex found in ALL 00s R&B songs in both it’s lyrics and instrumental, and it remains one of my favourites on the album.

After that, we have the album’s title track, Fly Or Die, and another of the record’s best. As well as another big ol’ riff and another bouncy drum beat, this song also boasts some of the spacey lil’ production features, making the band befitting of their name. However, what puts this below some of the other songs on the album is the lyrics, that, while trying to relate to the youth (“This is only for the kids!”) end up sounding whiny and generic and little else. Still, that doesn’t stop it from having one hell of a catchy chorus, mang.

Sadly, this trend continues on the otherwise fine Jump. While, once again, we have a great stop-starty beat and sci-fi-inspired touches in the background, we still get great lyrical gems such as “punk rock tattoos, leather jackets/good grades don’t come with that package” – these guys are in their 30s. Adding to this, that particular line was “busted” by Joel Madden, of Good Charlotte. What a dick.

Thankfully, however, we get our asses back to the borderline sex pest lyrics of yesteryear in Backseat Love. I jest, of course, although, referring to yourself as “daddy” is never great, unless you’re referring to chaboi Big Daddy M. As the title probably suggests, this is a track about getting down-n-dirty in the backseat of a car, fair enough. While this isn’t as full-throttle as some of the previous songs, it definitely fits the overall tone of the song – unprotected sex. Indeed, after a few listens to this badboi, you better take yo ass down to the clinic.

Next up, we have the first single from the album (yay! video!), She Wants To Move. A classic track in 00s hip-hop/R&B crossover circles, one of which I am defo apart of, She Wants To Move finds its lyrical premise, like many songs in the album and genre in general, in sex and women. Dope. Kidding aside, the track is beaming with personality and is notable for its latin-flavoured acoustic guitar, very akin to the once-Neptune produced Justin Timberlake (back when he was good). In fact, this track is very Timberlakey come to think of it. The feral beat and moaning guitars really make this track one for the sexy time, ah-wink-wink. It’s a great track, though, mate.

Next up, we have few less notable tracks, the first being Breakout. Following a very clear formula that the rest of the album seems to favour, this track utilises the same style of energetic arrangement and sensual vocal deliveries we’ve been getting from the band so far. However, there is a heavy reliance on the more electronic side of things, with the synths in the chorus being a welcome addition to jazz things up a notch.

After that, we have the 7-minute beast Wonderful Place. A mellower track overall, this track boasts a chilled atmosphere, emphasised by its use of acoustic guitars and whistled hook. It’s a song that basks in the summer sun and just can’t be assed. After songs like Jump, it’s a welcome shift in pace.

Another longun, Drill Sergeant picks the pace up and brings us back to those oh-so-brilliant and relatable lyrics. “Taking a stand against authority”, this song’s lyrical content really does get on my tits and, while it isn’t horrible, the instrumentation really isn’t up to the point where I can ignore the lyrics. I’d go as far to say it’s the worst song on the album. It’s not all bad though, as it does keep the glitzy production up and the beat does have a certain toe-tappability to it.

Oh, you thought the lyrics in Drill Sergeant were bad, mate, lemme tell something about Thrasher. Awful. Stop. Don– stop. Writing about bullies and standing up them, with the repeated hook “f*ck ‘im up!”, Thrasher manages to top it’s relatively listenable predecessor in crap lyricism. However, it’s gangsta-ish-ish flavour and subtle use of strings does split itself apart, instrumentally.

However, after the two worst songs on the album, we have possibly the best in second single Maybe, featuring the guitar work of Lenny Kravitz and drum skillage of chaboi Questlove. Taking the form of a heartfelt ballad, Maybe really hits points in all aspects of it. The tender piano chords and powerful vocals from Pharrell make that heartfelt aspect of it, as well as the backing vocals, which really are on point for the entire album, actually, especially as the bridges come in. Then, that absolutely weeping guitar, provided direction-inquisitor Lenny Kravitz, just shredding away in the background, ugghghghghggh. Finally, coming from a drummer’s perspective, Questlove very rarely does a bad beat and this song is no exception, complimenting that guitar perfectly.

Then, suffering from hard-to-follow syndrome is The Way She Dances. Now, any song’s gonna struggle to follow Maybe, so this song may seem kinda disappointing at first listen. However, it uses that formula I mentioned earlier really well, and ends up being a fun song. It’s nothing spectacular, admittedly, but it ain’t terrible.

Finally, we have the longest song on the album, Chariot Of Fire. This song switches out the “nerd” in “N*E*R*D”, replacing the sci-fi sound effects with subtle scratching and glamourous-sounding production, with light humour and fill-heavy drumming, which is another mainstay throughout the album. However, there is a minute-and-a-half long break of silence between the first and second half, so do what I did and get a drink in between or something.  It kinda ruins the pacing of the song, which is disappointing considering it’s the closer. Nonetheless, it’s a fine song.

Now, you may have noticed that, throughout this review, I’ve used words like “glitzy” and “glamourous” to describe the production on this thing, and that ain’t no lie. Produced by, you guessed it, The Neptunes themselves, you can expect their trademark style to shine through all over here, and that it does. While adding in those little bleeps-n-bloops does make N*E*R*D nerdy, I can’t help but feel they’re kinda out-of-place here, on an album where the two lyrical motifs are fighting and boning, primarily the latter.

Overall, N*E*R*D’s sophomore album Fly Or Die is a fun listen. While the lyrics aren’t always all there, Pharrell and Shae’s delivery is always entertaining, and the backup vocals really standout among the, admittedly tight, genre’s best. Add to that the more funk rock-oriented sound, bouncy drums and riff-ready guitars, and you’ve got an album that almost transcends genre, in a way. That being said, there are some very present songwriting problems for the crew, with a very formulaic sound taking hold for much of the album, the only great songs being those that break such a mould.