Yeah, mate, we know how to spell Baby…

So, it was my birthday yesterday (I’m going to thank you in advance for all your touching messages, OKAY???? RIGHT??? THAT IS HAPPENING, YESSSS????), and I couldn’t think of a better way to spend it than to go see the new film from my favourite director on the big screen — I have a very limited imagination, evidentally. And what’s the second best thing to watching a film? Writing about it… evidentally…

With a feature-career shorter than the amount of time I’ve been alive, Edgar Wright, since his 2004 debut Shaun Of The Dead (or even before that with Spaced), has been one of the most consistently entertaining, almost-perfect directors working. With only four movies under his belt (OK, five if you count A Fistful Of Fingers), three of which gracing my prestigious Favourite Movies page, I was excited more than anything to see what Wright would do with Baby Driver, his fifth feature film and first to be filmed and set in the good ol’ USA, making it already a departure from his primarily English (and Canadian) filmography. After its release, it became a critical darling and I had to see it. So, was it gonna race into my heart, or crash into a deadly inferno?

From the get-go, Baby Driver is very different from everything else Wright as directed. The Anglo sensiblilties of Shaun and Hot Fuzz have been swapped out for a much more glamorous, Americanised aesthetic. Baby (that’s B-A-B-Y) is a young and gifted getaway driver with tinitus, under the debt of Doc (Kevin Spacey), a mastermind of heists who employs a different crew for each job, ‘cept for Baby (B-A-B-Y). After clearing his debt with one final job, Baby (B-A-B-Y) meets Debora (Lily James), a diner waitress who shares his affinity for music and driving. However, Doc has another job for Baby, and he doesn’t have a choice. As expected from any film that is interested in being interesting, things go tits up from there.

The performances here are a factor that I’m not sure I’ve made mind up on yet (which is well useful for a review, nice one me). As Baby (B-A-B-Y), Ansel Egort plays the role of the quiet action hero well enough, if a little cliched on reconsideration. He had a good bit of comedic edge though, which I wasn’t expecting from an actor whose main exposure was The Fault In Our Stars and the Divergent series. Lily James’ performance may have been the worst of the supporting cast for me, though that has worse connotations than I intend — she was also pretty good.
Probably the stand-out performances here were that of Kevin Spacey and Jamie Foxx. Though a brilliant Kevin Spacey turn isn’t exactly shocking news, he really was on top form, commanding every scene he’s in with a deadpan authority. Moreover, Jamie Foxx was no pushover either, playing a mean psychopath here as Bats, the “antagonist” who is the main instigator of things going tits up. 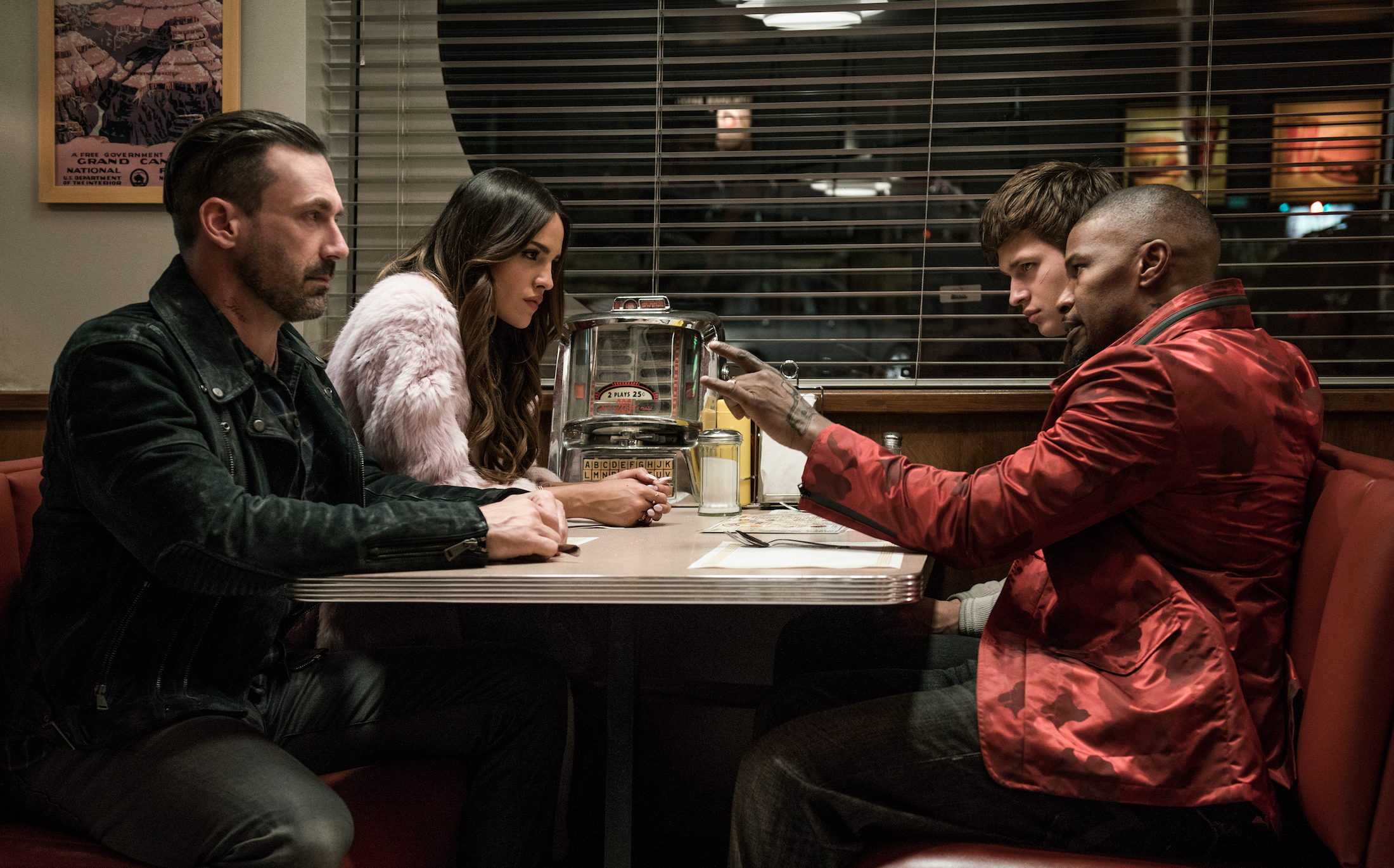 “Right, if you wanna get the curly fries, you’re paying for them yourself…”

However, what I believe led to some of the performances to be a bit, for lack of a better word, unmemorable, was the film’s main weakness — the writing. From a man who wrote some of the wittiest dialogue of the 00s, you’d expect a sharp script from Baby Driver. That in mind when I sat down in the cinema, I was both surprised and vastly disappointed when Edgar Wright gave me some love-dovey crap, some stuff about “one last job” and, oh my God, why do we have to be shocked by the dude’s first name? Sorry, but in my world, the name ‘Baby’ does not warrant either a spelling or a 😮 face. As I said, this subpar dialogue, bar a few funny scenes, was even more accentuated by the fact that it was Edgar frickin’ Wright who wrote it.

That being said, Wright is also not one to be known as a slouch behind the camera and, unlike on the dialogue, he was no disappointment. With one of the film’s main themes being centered around music, Wright had the genius idea to set the entire movie to the soundtrack. Indeedly do, the entire movie. Every set piece, every footstep was set to the film’s stellar soundtrack (we’ll get to that later). This was a really neat little quirk which, for me, really made it an Edgar Wright film. The direction was picture perfect, with every transition having both purpose and entertainment. How Wright manages to be so dynamic with every shot never ceases to amaze me, and just shows his technical ability as a director.

Step away from the Prius…

From less of a technical standpoint, though, Baby Driver was still a hell of a good time. The set-pieces, especially the car chases, especially the one that was shown in all the trailers, really were spectacular and a lot of fun to watch. It definitely proves to be a “big screen” movie, with the action coming thick and fast like an explosive custard. When we aren’t speedin’ behind the wheel, we’re treated to a bevey of shoot-outs and heist, keeping a good portion of the film adrenaline-filled.

Of course, a movie so revolved around music should have a killer soundtrack to match. Thankfully, Baby Driver delivers on this front too. With appearances from Incredible Bongo Band, Beck (who has also collaborated with Wright on Scott Pilgrim), T-Rex, Queen, among others, it’s no short of star power, with even Young MC and his stellar track Know How popping up. The film also has the original song Chase Me, featuring the combined efforts of Danger Mouse, Run The Jewels and Big Boi. That goes about as well as you’d expect — awesomely.

Overall, Baby Driver was a mighty good time. A solid story, ensemble cast and bombastic set-pieces lay the foundation for a great film to build itself on. However, I was very much disappointed by the sub-standard script from Wright, who is usually so witty, which just didn’t deliver for me. It was this and this alone, however, which prevented it from being a close-to-perfect film.