Right, I’m getting worried now. We haven’t heard of Reuben since July and now I’ve just got a Twitter DM from a cartel kingpin saying they’ve got him and will kill him from being un-productive until I pay their ransom. The ransom is only £50…. buuuuut Shadow Of War‘s out in a month so he might have to wait…

Or he’s just a lazy bastard.

ANYWAY, starting in 1998 with the Japanese release of the Sega Dreamcast (a classic console, there, definitely), the 6th generation is undoubtedly my generation of games, as it was the generation where I, a four year old with very little going on, got into gaming. Therefore, it should come as no surprise that a bunch of my favourite games ever came out during this time, mainly due to nostalgia, but also because they were flippin’ great.
So, today, as a 16 year old with very little going on, I thought I’d take a trip down Anamnesis Avenue and rank my favourites from such an illustrious era of gaming.

For this list, I’m only accepting games released on the PS2, Xbox, Gamecube, Game Boy Advance and Dreamcast, though I don’t think there are any Dreamcast games on there, jesus… I couldn’t not have the grandaddy of the modern FPS on here, eh? Well, I almost didn’t, until I found the PES6 doesn’t really count, but that doesn’t take away from the infinite influence Bungie’s masterpiece has over the modern gaming landscape. While series is hardly on the strongest footing, particularly after the developer change to 343 Industries, the first instalment is undeniably great, with pioneering gameplay features, a criminally fun multiplayer mode and an explosive campaign. This game represents a time when developers actually put some effort behind their blockbusters.

Boobs aside, Dead Or Alive 3, released exclusively for Xbox as a launch title, is an extremely solid, and, at times, extremely difficult fighter with an ample roster of *ahem* heavily-equipped characters. I know I said “boobs aside” but it’s literally 80% of what the game is. I guess we should be thankful, however, because Team Ninja’s tit-centric design lead to this having a really great set of graphics, especially for the time and the fact that the sucka was a goddamn launch title.

Easily the best game ever based on a movie, Activision’s Spider-Man 2 was absolutely mind-blowing to kid-me, being a Spider-Man game where you could actually be Spider-Man and swing around an open-world New York city and shoot webs and jump off of buildings and stuff. To be honest, I don’t think I ever played the story of this game in too much detail because I’d rather have spent my time fannying about Manhattan, a decision I stand by to this day. It was just a huge bundle of fun, especially for a kid who loved playing superhero.

oboioboioboioboi, this one’s a bit scary. My first real exposure to the beauty of horror games, Resident Evil 4, in my eyes, and probably the eyes of most gamers, remains one of the best games in the genre. Not only that, but it’s also pioneered third-person shooter gameplay, and dabbled in resource management features that would become prominent in games like Deus Ex. The huge range of evil bastards to kill were not only tough, but friggin’ terrifying! If you disagree, then I welcome you to book another appointment with Dr Salvador, and recoil in terror when he chops your goddamn head off. This game merged action-packed gameplay with a truly frantic need to survive, and remains my personal favourite horror game. 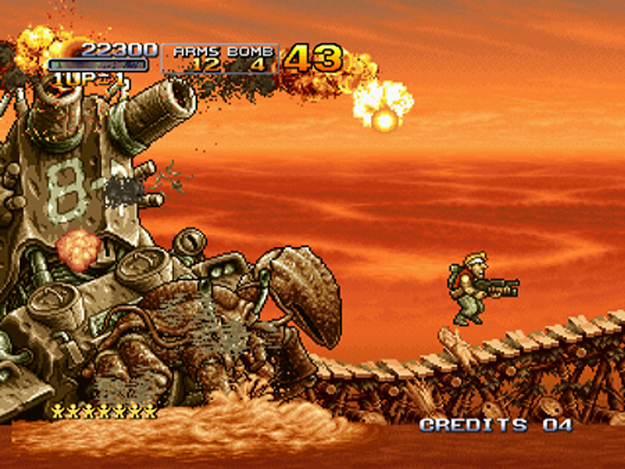 Forget Contra, this is the king of Run N’ Gun Shoot ‘Em Ups. Though it is punishingly difficult, this was a surefire childhood favourite of mine, probably thanks to the phat explosions and frantic gunplay, mixed with varied levels and a wicked sense of humour. I say that, but, at 4 years old, I was probably just thinking “WA-HOW! THIS IS AWESOMEEEEE”. Moreover, the Metal Slug Anthology on PS4 has let me relive this game and it still holds up; it’s still awesome but also punishes me so that I know failure like an old friend. What a beautiful bastard.

Probably one of the most underrated in the Mario universe, as I don’t really see it being revered for how it’s probably the best, if a little simple, Mario outings on handheld. There’s very little messing about with that pure MK formula here, but it just provides a smorgasbord of great tracks, charming pixel graphics and, above all, mobility. While I could make an argument about the wonky handling and how that kinda dampens the gameplay, I don’t want to, because it’s great none-the-less. Though nostalgia played a part in it’s place here, Mario Kart: Super Circuit had 2002-2006 car rides sorted for me. Ooh! Another Mario game! Indeed, my personal favourite 3D Mario game (64 was a bit before my time), Super Mario Sunshine boasts brilliant graphics (for the time) with a truly original story and setting that Nintendo would follow up solidly with Super Mario Galaxy. The platforming elements went into the game brilliantly and the overall style of the game was brilliant. It was packed full of content and really let the player explore their surroundings, to a certain degree of course. That being said, Shadow Mario had me in cold sweats of terror…

You see, this kind of game would never get made today. Not only because The Simpsons is kinda not great anymore, but because it doesn’t have big-money potential. On the face of it, Hit & Run looks like nothing more than quick, cheap game to cash-in on the booming popularity of the titular yellow family. However, imagine everyone’s surprise when Radical Entertainment delivered an immersively brilliant Grand Theft Homer. With a mah-hussive Springfield to explore and disrupt, this game boasts a shedload of content, really solid gameplay, campy graphics and a script on par with the show. It’s difficult to describe how awesome this badboi is, just imagine jumping into Springfield and wreaking havoc. That sound fun? It should.

Dayumm, another Mario Kart? I guess we know how lil’ Milo spent his days when exams and ‘getting a job’ weren’t LITERALLY THE ONLY THING HE EVER THINKS ABOUT EVER ALL OF TIME HE JUST NEVER STOPS THINKING ABOUT IT OR HIS LIFE WILL BE OVER. That’s right, playing Mario Kart. In particular, playing this Mario Kart, the one so ridiculously different to the rest of the series that it should be awful, but it’s incredible. The frantic, fast-paced gameplay is perfect for local play, as is the game’s main gimmick; two racers per kart. This allowed a co-op aspect to the multiplayer and for two people to be shouting at each AND another team! In all seriousness, the charming quirkiness, overwhelming nostalgia and fantastic amounts of fun to be had all come together to make a nigh-on perfect party game.

It be time for da honourable mentions, ye big-boy:

How could it not be? While I’m, at most times, hideously bad at them (except for when I kick my friend’s asses), the fighting game is one of my favourite game genres and Soul Calibur II remains, with stiff competition, the epitome of a great fighter. A broad range of characters, skill-demanding but also easy-to-grasp gameplay and a plethora of game modes all come together to make this game a classic. With it’s re-release being available on Xbox One, I’m now able to still play this masterpiece with my friends today and, while most games seem outdated, this still feels fresh and new, minus the amazing-at-the-time-kinda-shitty-now graphics. I played it all the time as a kid and I loved it, now I still play it a fair bit and I still love it; there’s not more you can ask for from a game, is there?

Thanks for checking out my list, if you have favourites that weren’t on list, tough tittays! But you could leave them in comments, and pull my soul a little bit farther from Oblivion, so no pressure…