This pretty much went the way I thought.

OH YES! It’s the time where everyone gets their jollies about and watches the latest entry in the Star Wars franchise. It’sa all looking good so far. Yes, yes, critical acclaim, 7.7 on IMDb, 86 on Metacritic… BUT WAIT. What’s that? A 54% audience score on Rotten Tomatoes? WELL THAT MEANS IT MUST BE STRUCK FROM THE CANON.

Seriously, someone actually wants that.

Still, while the fanfare has been blowing about this badboi, it’s also received a surprising amount of backlash and hate. Admittedly, this is from the same hermits that were sending death threats to Jake Lloyd in ’99 but still, they love their Star Wars. That being said, everyone’s inferior in my eyes so I wanted to make my own mind up. God forbid I join this cult.

SOME SPOILERS FOR FORCE AWAKENS HERE, AND MAYBE SOME FOR THIS FILM AS WELL, I HAVEN’T WRITTEN IT YET. WHO KNOWS. GOLLY, THE MYSTERY OF IT ALL. I WONDER I WONDER.

Set almost immediately after the events of Force Awakens, Rey has found Luke Skywalker, some guy who I am almost positive has no relevance to the Star Wars franchise at all. Anywhom, turns out this Luke guy is some kinda Jedi Master (oo’er) whom Rey hassles and hassles until she gets some Jedi training outta him. Meanwhile, the First Order are inches away from obliterating the resistance once and for all, well, more like miles, to be factually accurate, as their mobile base is being very slowly chased down by the armoured-up horse-f*cker of a spaceship the First Order have got goin’ on. What follows is ya general Star Wars fare, space fights, aliens n shit, innit.

RIGHTY-ROO NOT REALLY ANY MAJOR SPOILERS FOR LAST JEDI BUT YOU BET YOUR ASS FORCE AWAKENS IS RUINED THERE. DON’T WORRY THOUGH, NO MORE SPOILERS FROM THIS POINT ON. NO, I SAID DON’T WORRY, JESUS.

As was horrifically documented in my Force Awakens review, which serves as much to benefit me as being thrown into a vat of pig’s blood (although I’d low-key love that xoxo), I very much enjoyed the direction these new flicks were taking, with the spectacle we expect from Star Wars, as well as notes being taken from their contemporaries, notably the MCU, to modernise them.

No doubt, JJ Abrams is a major reason for the previous film’s success. His obvious passion for the project, as well as his directorial style, gave the film a really tight structure and stunning visual palette. However, while the latter comes in great spades, I felt like director Rian Johnson (Looper) struggled on the former. Unlike Episode VII, Last Jedi suffered from a comparatively weak structure, I felt like scenes ended abruptly and people came out of nowhere. This includes a particularly infuriating moment when K I LIED. JUST LIKE ONE MORE SPOILER HERE AND YA GOOD Leia was seemingly killed after being sucked into space, only to somehow wake up and basically float back into the ship, even though she’s basically just a regular woman, no powers, no nothing IT’S DONE GUYS which was even more infuriating because IT WAS NOT EXPLAINED IN THE SLIGHTEST.

That being said, the aforementioned visuals of The Last Jedi really were a cut above. DP Steve Yedlin (Looper, San Andreas) really impressed me with his striking use of colour, especially in the final scene, which provided what could be my favourite shot of the year. Apart from that, though, he still managed to capture that all-important grandeur that’s demanded from a Star Wars film, which was also helped along by some of the wonderful on-location filming.

To compliment this beautifulialitiness, Star Wars wouldn’t be Star Wars without some kick-ass action set-pieces. Have no fear, Last Jedi delivers, a little too much actually (never thought I’d say that). Indeed, while get ourselves some excellent sabre-play, some brilliant aerial dogfights, blasters-coming-out-of-asses and explosions aplenty, there are moments where it feels more like filler than killer. Namely, we get yet another f*cking trench run in the Millennium Falcon, yeah, like literally every other Star Wars film. While it was quite aesthetically pleasing, undoubtedly, due to the fact that they were flying through Pop Rocks, it served no actual purpose and just felt done before. Still, it’s all mightily entertaining, but it ain’t hard to tell where they got the 2hr 33min runtime from…

Of course, the John Williams-composed score is a thing of beauty. I don’t know how many ways you can really word “captures excellence and shits it onto a movie” but that’s what he does, time and time again.

IT SURE DO LOOK GOOD THOUGH.

From the performance side of things, we’ve got a really strong cast all-round really. Returning from Force Awakens, we have Daisy Ridley as Rey. I gotta say, after being impressed by her in VII and again here, Ridley is quickly becoming one of my favourite actresses right now, and I think she’s one big role away from a potential Oscar, so yeah, liked her here. We’ve also got John Boyega and Oscar Isaac as the Internet’s most shipped couple, Finn and Poe. While my opinions on them remain the same (great), their relevance to the film didn’t seem as great, but that’ll be down to the writing (Rian…). Then we’ve got Adam Driver as Kylo Ren, the film’s main antagonist. I still don’t buy him as a character cus, as my dad said, he’s just so wet. Like a damp flannel of a villain. HOWEVER, Domhall Gleeson’s performance as General Hux stood out to me as possibly my favourite, oddly enough. I just really loved his slimy, weaselly-ness, almost like a cartoon baddie. A real “I’ll get you my pretty” performance, and one that was really entertaining to watch.

Then we’ve got, coming back from the original trilogy, Mark Hamill, Frank Oz and the late (and immeasurably great) Carrie Fisher as Luke, Yoda and Leia respectively. Hamill’s older, more grizzled turn as the Jedi Master was really quite good, even if he did just sound like the Joker all the time. However, I really think he could’ve been used to great effect (Rian……). Plus, though it was only a cameo (and a kinda unnecessary one at that), seeing Yoda was really nice. Sidenote, I LOVED how the CGI for Yoda was done so it was reminiscent of the puppet used in Empire, an excellent touch really. Finally, seeing Leia was always gonna be bittersweet, but it was inevitable that Carrie’s performance was gonna be stellar, and that it was. 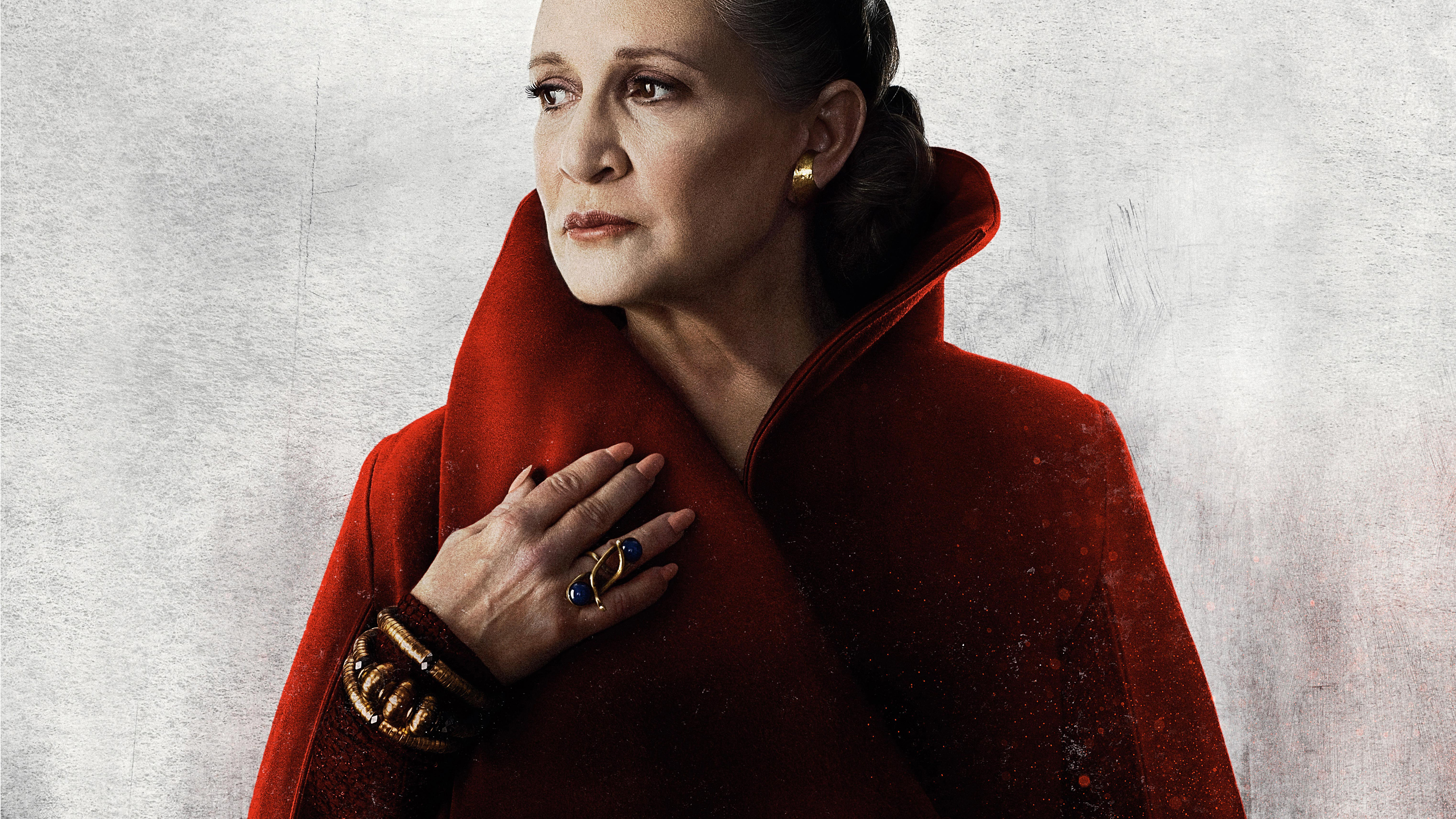 Finally, coming in fresh for this, we have Kelly Marie Tran, Andy Serkis, Benicio Del Toro and Laura Dern. Kelly Marie Tran’s Rose, I’m pretty sure, has won over literally every heart on the planet. Her performance here was, in my opinion, nothing particularly showstopping, but her likeability is undeniable. Donning the ping-pong-ball-green-catsuit (AKA my Thursday evening wear) yet again, Serkis’ Snoke is very much the evil kneivel. However, while The OG Emperor was this great figure of evilness, I thought Snoke here was, yet again, another underused character, being reveal from the shroud of VII immediately and just serving as someone who mocks Kylo, good good.
Moreover, Del Toro and Dern, while both equally excellent (especially Del Toro, who’s just the coolest all the time), were basically there cause they could be, contributing to a very real overpopulation issue in The Last Jedi – which is just characters and characters and some more characters and they just. don’t. do anything.

Overall, Star Wars: The Last Jedi isn’t the best Star Wars film, in fact, it’s probably my least favourite of these newuns. However, it’s still a cut above the late 90s/early 00s output of the prequels, God rest our soul. Visually stunning, the aesthetics and sound design are let down by a director who clearly isn’t ready for what this is. Plus, with action set-pieces and different characters coming out of every possible orifice (which is almost never a bad thing), I think this movie can be summed up in 2 words — too much.