Yo, this be Reuben. As per usual, I’ve been listening to a lot of music, so I thought I’d do a li’l write-up on some of the music I’ve been listening to. That so happens to be the oh-so 90s post-punk alternative rock extravaganza Jane’s Addiction. And haha-ahahahahaha. I’ll never forget my dad’s face when he first saw the album cover of this.

Fronted by the brilliant mentalist that is Perry Farrell, the band certainly has a lot of energy, or at least they did in these early days, as the music on Ritual de lo Habitual showcases. The whole first half of the album, at least, is completely in your face: a high tempo, ridiculously fun blast to the senses. You’ve got chugging riff-tacular bass and varied and quick drums at the base of it all, and on top of that Dave Navarro’s shredding guitar thrills and Perry’s shouted, unadulterated vocals.

Everything on this album is just natural. There seems to be very little editing or tampering with the recorded music, so there’s certainly no problem of over-production here. They blasted out the music and all the instrumentals and structures were too good for much editing. For a bunch of presumably drugged up kids, they sure knew how to put together a good record. And although its mix isn’t the best I’ve heard, it can be forgiven because it was made in 1990, and it is good in the fact that every component of the music stands out. The best thing about the record is, everything just flows. And, because it has so much variety, there is no risk of losing interest with this one.

As mentioned, the first half of the album (tracks 1 through 5), is completely in your face. It’s a punky and jumpy explosion of music, and although it is in your face, it is not so much that it is really obnoxious. And, although with a lot of punk or punk style music there is often little instrumental skill to be heard, Jane’s Addiction really know how to play. As highlights go from this first half of the record, there is no other song I could talk about than Been Caught Stealing, which is the last little hit to the face before things get slower. It’s just an absolute classic. Probably Jane’s Addiction’s best song aside from 2003’s Just Because, it’s just such a fun song, and the perfect lead single for the album. It’s got fistfuls of energy, instrumental variety, and, most importantly, it’s really damn catchy and memorable. If I were to be one to do parties, this would be a great party song. Oh man, that was a depressing sentence. I’m just gonna say it’s a great party song.

Now, I’ve explained that the first half of this album is a punch in the face, but I haven’t delved into anything in the second half of the record. After track five, Been Caught Stealing, we get taken on a half-an-hour long acid trip with slower pace and more patient psychedelic rock from Navarro and co. In these songs, 6 through 9, we are really shown what the band can do. All the music on this side of the album is so utterly unique, with the skill and precision of the German football team and the flair of the Brazilians (lame reference alert, sorry Milo). It’s really instrumentally sound, and solid, somehow grounded in all its madness, as the band brings out some instruments that sure don’t sound like guitar and bass to add to the already brilliant variety (it is the spice of life, after all). The highlight from this part of the record simply has to be Three Days, which is the most solid but messed up piece of music I’ve heard. Lasting ten minutes, it’s a progressive piece, which reaches multiple climaxes and with the bass and guitar at their peak quality, it’s a joy to listen to from start to finish — especially with Perry Farrell’s crackpot lyrics and vocal delivery.

Indeed, the things that impress me most within the music are Dave Navarro’s guitar and Eric Avery’s bass work. My love for Navarro’s unique guitarwork is already well-documented on this site, but his work on this album really elevated him in my mind as one of my favourite guitarists full stop. In particular, his solo on No One’s Leaving is an absolute spectacular show-offathon, and the tone he uses on Three Days is to die for. Other than particular examples, however, his guitarwork is just awesome throughout the whole record, biting and kicking the eardrums with his brilliant use of delay and just his immense skill on the instrument. 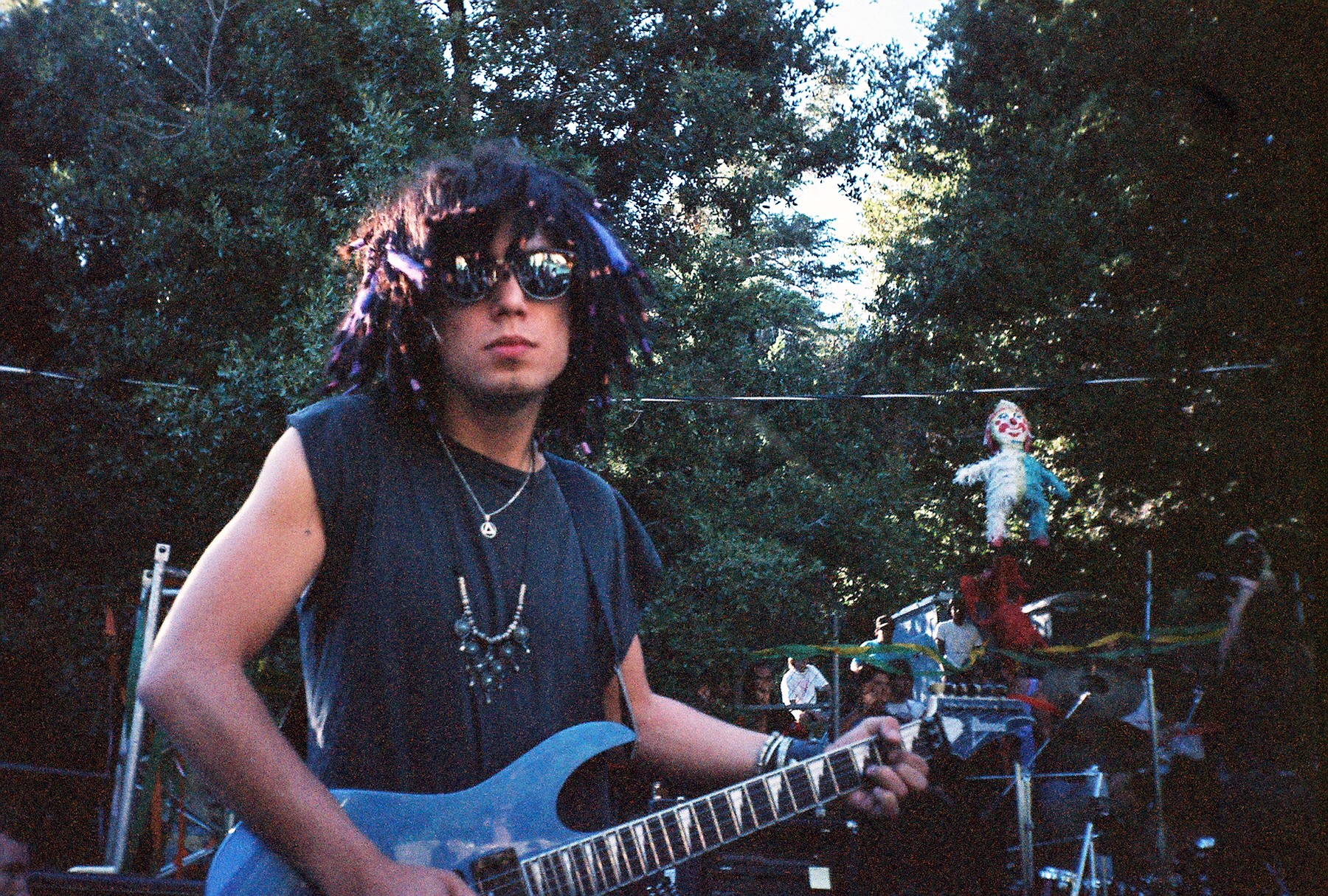 As for Eric Avery on dat bass guitar, on the other hand, he is an absolute beast, or at least was back in 1990. Every time I listen to his record, I get more and more appreciation for the awesomosity of his basswork — he’s now become one of my favourite basses of all time based on his stuff on here. Even when, say, a song hits a point which doesn’t do much for me, there is always a sick-ass bass riff or lick running through it to enjoy. The appreciation I have for his bass on Ritual de lo Habitual is just hard to put into words. His riff on Three Days is one of my favourites of all time, the stuff on Then She Did… is just SO COOL AND FUNK, and Ain’t No Right holds one of my favourite fast tempo bass riffs I’ve heard. The bassitude just does not stop on this record.

I think the only restrictive elements for Ritual de lo Habitual is that because it is so mad, it does require a certain mood to listen to it, and, while for the most part the melodies are spot on, there are points, especially in songs like Ain’t No Right where there is no melodic power, and all that is keeping me enjoying the music is the impressive musicianship that’s on show. And while Perry is basically a bag of fun, his vocals can be slightly too mental at one or two points. They take getting used to. And while still a great track in its own right, the album closer Classic Girl doesn’t quite grab me like the rest of the album.

Even so, these are only little qualms and overall I love the album. I think I’ve said how much I love the instrumentals more than enough, and with the structure of the record and how well it flows, it’s pretty much impossible to lose interest in it. For me, at least, it puts me into a daze and I don’t want to get out of it. Ritual de lo Habitual is one of the better rock albums of its time and recommended to any fan of the genre.