WOaH! A game review?! Damn, haven’t seen one of these in a while, eh? I tried writing one for Middle-Earth: Shadow of War a few weeks ago but gave up due to writer’s block — let’s see if this one’s more successful…

With a lifespan of 14 years and 3 console gens, the Far Cry series has become one of the most beloved in gaming. Rather than following a complete franchise story, the common link between the games lies in the narrative structure of the games; fighting some warlord dude in the wilderness with animals and blowing shit up and shit. This, much like Ubisoft’s other flagship series Assassin’s Creed, allows for unlimited possibility in terms of characters and setting. Now, I’ve played bits of Far Cry 3 and 4, but found them intimidatingly big and packed full of content — so I pussied out. However, with Far Cry 5‘s small, midwestern setting and engaging characters, I thought I’d give a good go of it. 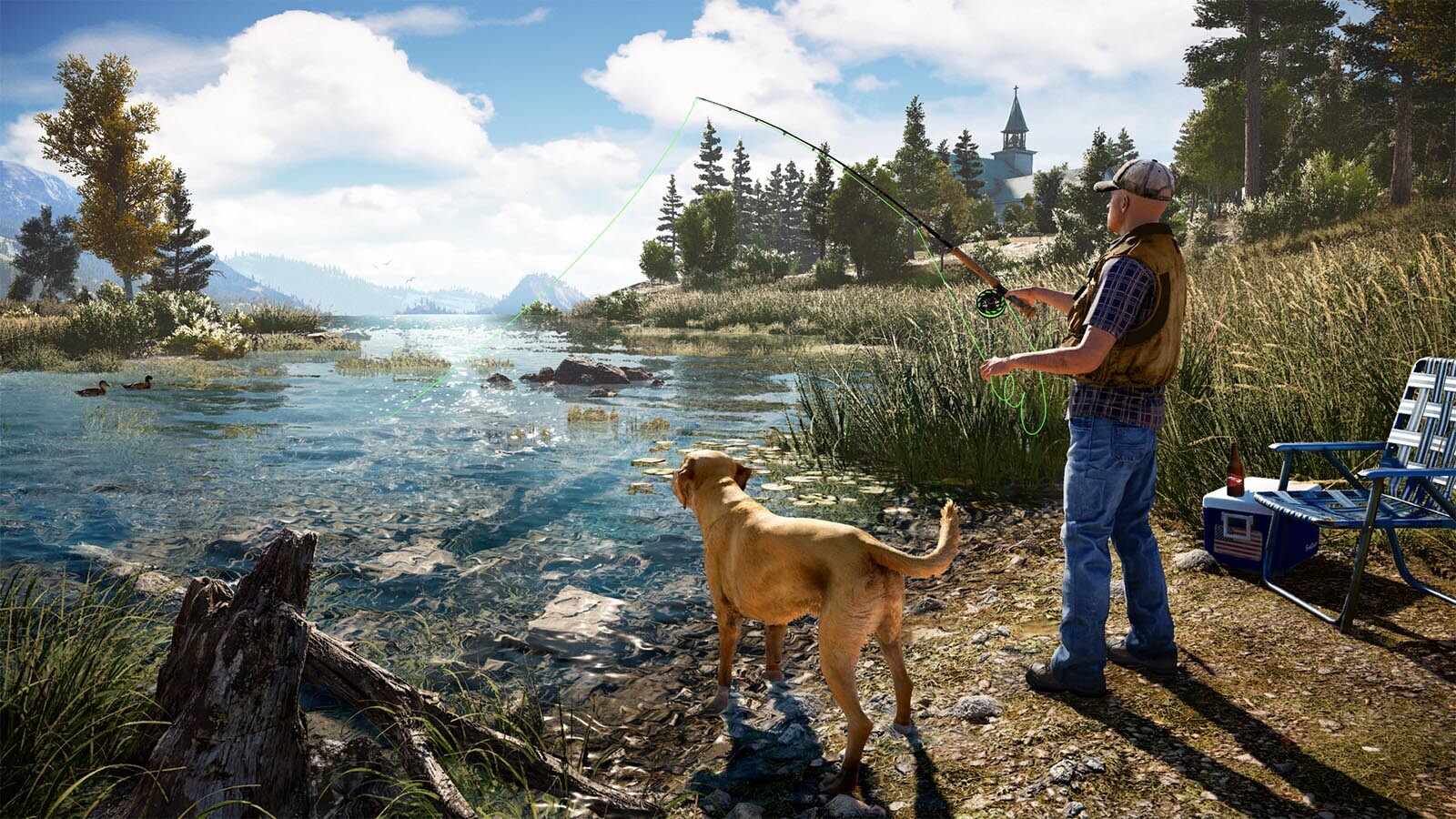 As some kinda deputy sheriff, you, along with a band of misfits you meet throughout the game, must join together and release Hope County, Montana from the terrifyingly controlling yet deluded grasp of Eden’s Gate — a religious cult headed by Joseph Seed (the Vaas or Pagan Min of the game). However, just like Friends, it ain’t just Joey. You’ve also got the rest of his “family” on your ass, pumpin’ out hallucinogens and mutated wolves like there ain’t no tomorrow, and the dangers prowling around smalltown USA. I know it doesn’t sound too scary — but they got bears, mate.
As the game went on, I found myself becoming less-attached to the story, as it devolved into something I’d seen plenty of times before in plenty of games before, though the ending was still a bit of a shock. That being said, I found the antagonists in the Seed family to be really interesting and engaging characters, with the “religious nut” angle being played really well, even if they could’ve gone even further with the cultural context of today and Trump’s America etc. etc. Inoffensiveness aside, the writing and performances from each of the baddies were all really good.

Back in the intro (ah good times), I mentioned how ran away from Far Cry 3 like the lil’ bitchboi I am because of how damn big the whole thing was — and how packed it was with content. Well, in Far Cry 5, it’s still kinda that but you feel more inclined to persevere as you become more immersed in the homey, yet still savage, hills of Hope County. Split into three sections, each controlled by a subsidiary member of the family, the map covers a healthy and diverse range of environments, but not too much as to have it feel out of place. The pinewood forests stood out to me as my favourite, sending a lot of post-apocalyptic, Walking Dead vibes, personally — adding an extra facet of the game when you’re not playing the story.

However, who gives two shits about the flora and fauna when you’re setting it ablaze with your mah-hussive firepower, eh? Indeed, there is plenty of stuff to fuck up in Far Cry 5 and plenty of stuff to fuck it up with. While, sure, you could stick a silencer on everything, try and go all Splinter Cell on some peggies (the game’s disposable fodder), but I feel like Ubisoft are edging you towards a louder approach — with rocket launchers, flamethrowers and grenade launchers all becoming your best friends. There is a great amount of content in this game, with a bounty of collectables to be found and side missions to be endlessly laboured through.
There’s also plenty of ways to spend your time doing nothing — fishing and hunting being the main two in my experience. While seemingly mundane, there’s a surprising amount of satisfaction in hooking an Arctic Grayling Salmon after an hour of trying, and there’s no thrill like chasing down a black bear with a slingshot and a quadbike — all I’m saying.
These all distract from the meat of any game, which is the main story of course. The story missions are brilliantly varied and, though it’s EXTREMELY ANNOYING when they start without your consent, it’s a good incentive to progress through the game at a more organic pace — rather than collecting everything then doing the story in one go, like I am prone to. While it was frustrating at the time, upon reflection, this really helped with the rhythm of the narrative, which is difficult to do in any video game, especially one as open-ended as Far Cry.

“Hey there Boo-Boo, he’s making off with our pic-a-nic basket!”

That being said, I also felt as if the way Far Cry 5 progresses through its story kinda devalues any replayability, as you pretty much manage to complete everything before the game ends. I mean that would play into the whole apocalypse thing, I guess. I mean, if you’re really gagging for more Far Cry goodness, there’s a coupla options for thou. While I finished playing before they were patched and fixed up, Ubisoft have been releasing live events to enrich doing fuckall in the game world. Moreover, you’ve got Far Cry Arcade, which is user-generated maps and challenges. I enjoyed what I played of this a fair amount, and I could see myself going back there in a month or two to see what’s gone down.

Graphically, Far Cry 5 does not disappoint. Every room and house is populated meticulously with wonderful little tidbits and details that really make a game world come to life. The character design, while not particularly exciting or unique, has had just as much time put into it. Plus, the FaceFX technology behind the facial animations is eerily good — with your one-on-one’s with Joseph, especially, having an extra filter of menace as if he’s talking directly to you.
However, when you’re out and about, it pays to have a bit of fun with the explosions and bloodiness of it all. As you’d expect from a series with Far Cry 2 in it, the fire is no slouch, as it spreads deviously quickly, engulfing entire landscapes before you can even stop to think, and roaring animalistically — the animation dept. really outdid themselves here all round.

Overall, as, what some would call, a first impression into the Far Cry series, for me, Far Cry 5 did a mighty fine job. A somewhat continuation of the tropes we know and love, the game manages to refresh it all with it’s smalltown USA setting and twisted religious undertones. While the plot might’ve thinned out as it went on, the characters remained a time and a half and it’s packed the brim with content to keep you entertained for a good while. While I don’t quite see it being my game of the year as 2018 ploughs on, I don’t see it being too far off either.