I haven’t written down a proper review in a long-ass time, I can appreciate this. However, through all the daft features I’m pushing, some real music writtin’ is what we need, I think. And what better than an album that I haven’t stopped listening to since I got it — this one. It’s this album, the one that I’m writing about now. Yeah.

Snail Mail is the project of indie rock singer-songwriter Lindsey Jordan. This is usually the part where I do the storied history of a band, but with Snail Mail there isn’t much to talk about — they’re fresh outta Maryland, hot off the trails of a couple o’ EPs and working on the same labels as Queens. I became aware of this album through the buzz of surrounding it, it kinda came out of nowhere really. On first listen, though, I really fell in love with the glitzy aesthetics and Jordan’s understated songwriting, with lyricism finding beauty in the mundane. 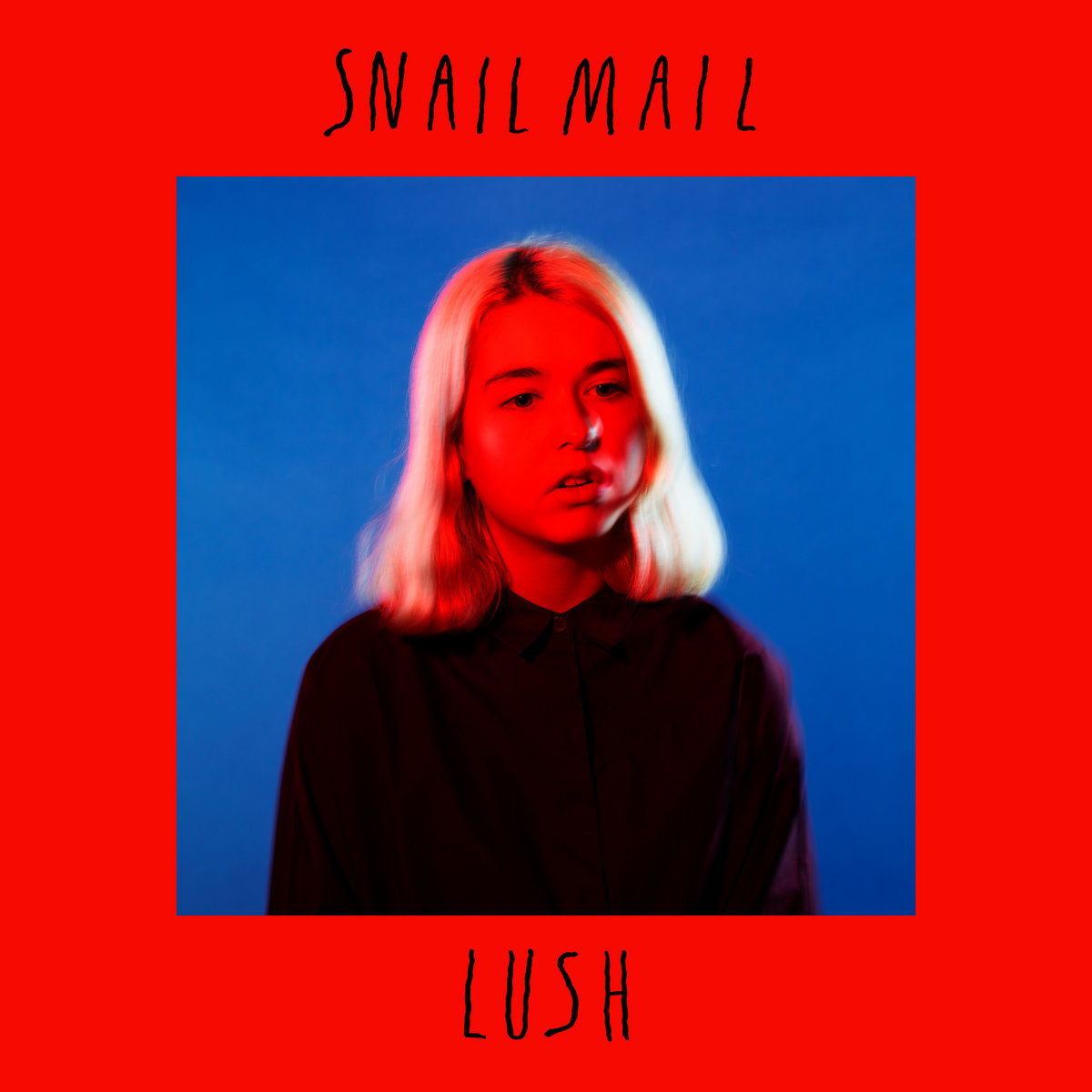 The beauty of Lush lies in it’s structure, as its seamlessly shifts between dreamlike track to dreamlike track. The introduction of the album, a short ditty, encapsulates this and shows the cyclical nature of the record, tying in to the album’s closer. The overall effect of this is an album that you put on repeat and not even notice that you’ve been listening to it for 3/4 hours — there’s a decadent slumber about it.

The introduction then leads into lead single Pristine. Led by a gorgeous guitar part, yet punctuated by some contrastingly sharp drumming (cymbals be flyin’), there’s a sense of frustation at monotony in the lyrics, with Jordan taking a lot of tired coming-of-age tropes and making them relatably modern. Despite what could be construed as keywords and phrases you can hear anywhere, she’s not someone so detached that they feel they can commentate. In fact, it’s the fact that she isn’t detached that gives the lyrics such an articulate and relatable picture. It’s free from stereotypes and cliches. And it’s refreshing to hear, the outcast gets sung about enough.

Jordan’s songwriting, for the first time, is of center stage here and you can instantly see why she’s been lauded the way she has been. Despite this being the opening track, for all purposes, it’s the strength-in-songwriting here that is indicative of the rest of the album. I heard Pristine and instantly felt at ease with the album; as Radiohead said, no surprises please.
That might seem like a dig, but the comfort you can find in Lush is a big part in why I love it, and why there’s an appeal about it outside of the mopey teens like me that like the lyrics. There’s a warmth in the instrumentals, the guitars are a space heater.

In spite of this, the next track, Speaking Terms, feels a lot more spacey and removed than the song before it. Jordan’s more reserved delivery and bendy guitar lead, coupled with a severe lack of cymbals that I personally cannot abide by (I love a cymbal, what can I SAY?), really highlights these differences. However, the groove going on in the verses, mainly provided by that stuttering kickdrum, infuses the track with a laidback air, making it a nice break from Pristine‘s more frantic pre-catharsis.

After that, we have second single Heat Wave, a complete summer bop thanks to a killer guitar line rumbling throughout it, swimming in garage-rock callback. Instrumentally, I love how the aforementioned guitars are layered over each other, as the glittery main riff is periodically shattered by a distortion-fuelled solo that gorges my inner 90s-Jonny-Greenwood like comfort food. The bass, as explained by Jordan in analysis of the album, does its own thing in the sub of the mix, which is something I care greatly for — I cannot stand an unimaginative bassist, while the drumming blasts through different movements, keeping it interesting throughout.
I won’t keep going on about my own sappy adoration of the lyrics, particularly here where I love them A LOTTTTT, but this is a particularly soft point on the album for me, and I like it a lot. Give it a listen now, there’s a video — wayhey.

The following tracks Stick and Let’s Find An Out are a slight dip for me, as they feel like they’re treading water in the stylistic or narrative progression in the album. Stick is a slow, lulling ballad, with a sense of closure in the lyrics to make it a good closer (although then we wouldn’t have the cyclical structure which I LIKE), but the minimalistic approach in the instrumental does make it a bit uninteresting. This pace is coupled with the fact that it’s the longest song on the album to feel like a bit of a slog, by the album’s high standards at least.
Then, third single Let’s Find An Out, maybe my least favourite song on the album, squanders quite a nice set of lyrics and chord progression with an acoustic aesthetic that I personally find wildly uninteresting. It has this aquatic atmosphere that just doesn’t fit with the stripped-back sound at all.

However, we are finally plunged back into the decadent guitars and dreamy shores that Snail Mail is for me with next song Golden Dream. While not giving us a lot different outside what we know, this is a perfect example of that comfort that I was talking about earlier on; her guitar tone is relaxing, with a glitzy spin on indie pop, based over drumming that flips between space-filling rumbling toms and showering cymbals hitting the ear like the lights on the Vegas strip. The hook “I’m not yours/Know when I mean it, I’m not wasted anymore” sounds like its a born feminist mantra, however, I feel like feelings of possession and feeling possessed are universal — another example of the subtle relatabilty of Jordan’s lyrics.

This mixes “pristinely” (eh?) into Full Control, my personal favourite on the album, and a song that is stunningly not a single. To start, the drumming is eclectic, offbeat and almost as interesting as anything the frontwoman’s doing at the front of the mix. The verses are accompanied by an offbeat, rimshot-pervaded rickety line, punctuated by crisp hi-hats and rolling toms, while the chorus, again, showers us with cymbals — it’s sublime. The melody rolls on the rhythm better than anything else on the album, as the highs and lows of Lindsey’s vocals are reflected in the beat, the guitars really make way, acting in a more supportive role than they usually are.

The only issue with that song, and it’s an issue that runs through the album, is the undermixing of the bass. This is no stranger to any music, as, for many, the bass is just padding, it seems, to be dropped to the bottom of the mix. However, when you focus on it, there’s a lot to love there. As I said, bassist Alex Bass (I mean…) makes a point of deviating from the main riff, which, in my mind, is the sign of a good bassist. In short, more bass, less problems.

The final two songs take the pace back to what we saw with Stick, but they just strike you as less of a chore. Deep Sea is a trippy in it’s minimalism — taking the stripped back sound and giving it a better song to fit it. I love the melancholic guitars and stumbling drums. It’s a lazy river of a song, except it’s not filled with disgusting people and their kids, but instead drifts along, heralded by some atmospheric horns on the side. It’s not a song to end an album on, but a sleepy track like this can hit the ear just right sometimes.

Anytime, the album’s final track, has perhaps the loveliest intro in an album full of lovely intros. It’s basic, but Lindsey speaks through that guitar and it just happens to resonate. The opening lines have familiarity already, as they’re the same lines in the intro (cyclical nature strikes again boiiii), it’s a genius way a structuring an album so that you already feel at ease with a song you’ve never heard before. It’s a great closer, as like Stick, it has that closure that you want from a finale. It’s a great to end Lush, as, like the entirety of the album, it lives up to the album’s title.

Overall, Snail Mail’s debut record, Lush, is one of the best albums I’ve had the pleasure of hearing this year. Lindsey Jordan’s indie rock stylings make for some of the most exciting music around today, as it pays tribute to the inspiration behind it, while sounding new and fresh — it sounds like the future if we’re lucky. Her songwriting is both bitterly relatable and sweetly introspective, the melodies seem perfectly crafted to the words. Under this, we have a great, groovy rhythm in drummer Ray Brown and perfectly-named Alex Bass on his titular instrument. However, there is a lack of bass in the mix which upsets me, and Lindsey’s lyrics won’t resonate with everyone. If you’re looking for the future of indie sounds like, it’s right here.