Now Dig On This…

Spider-Man’s had a bloody go of it, movie-wise, I’m sure we can all agree. With classics like Sam Raimi’s first two movies, and unloved bastards like the other Raimi movie (back in the attic that goes), the Webslinger Boio (as he’s officially named (canon)) is no stranger to the silver screen and the acclaim/pannings that come with it. However, with his only outing being in the aforementioned third SHITE BASTARD GET BACK IN THE ATTIC WHAT HAVE I SAID movie, it’s a wonder why Venom, the most iconic Spidey villain (imo don’t @ me), hasn’t had more screentime.

Topher Grace — his name’s Topher, that is his name, what — really tried, I think, giving us a.. um.. errr… character(?) in Spider-Man 3. However, much like everything else in that movie, bar Tobey Maguire’s violently burgeoning sexual magnitude, it didn’t really work. Now, Tom Hardy, one of the UK’s finest acting exports of the past decade, and a renowned angry mumbling sexy man, is giving the symbiote a go-iote — how did he fare? 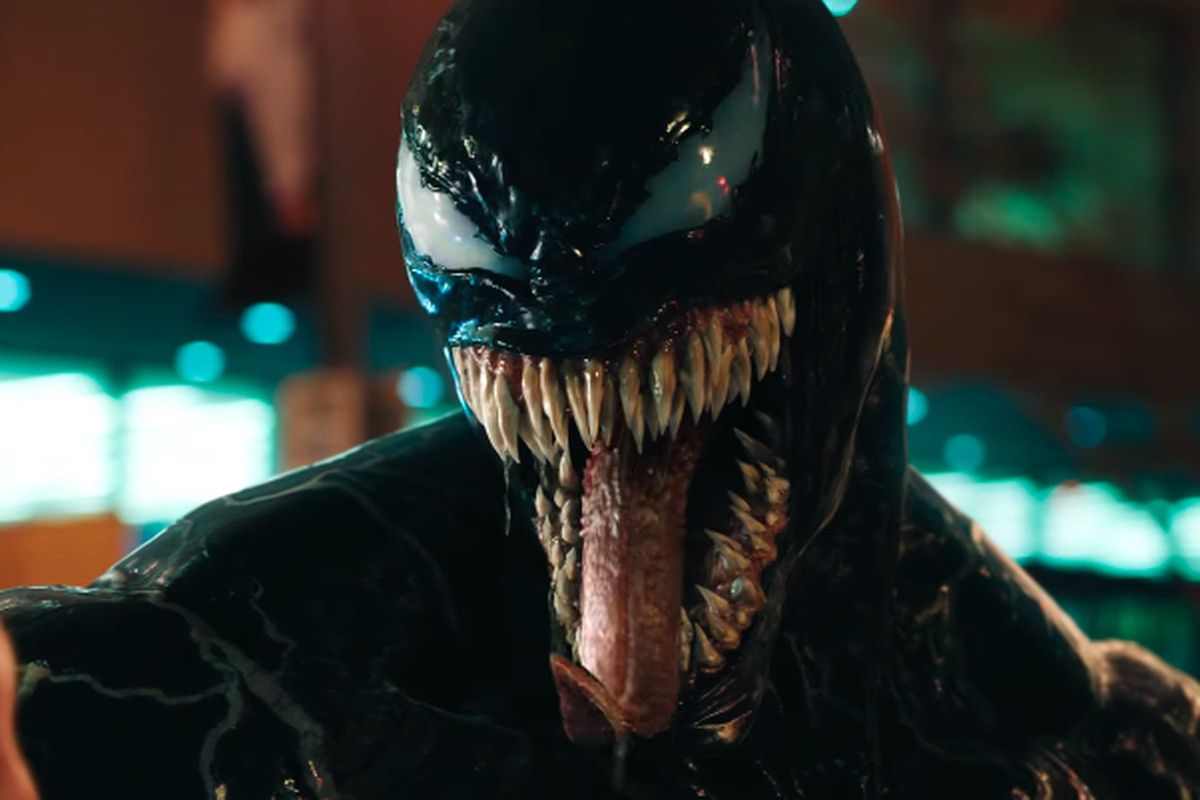 Let’s get this out of the way. Venom is fucking bizarre. Leading up to it, I didn’t know if it was gonna be total trash or not and, now that I’ve seen it, I’m honestly none the wiser. Tom Hardy stood out against a bland supporting cast, with a definitely whited-up Riz Ahmed and an already-white-enough Michelle Williams packing in the extra “star power”. That said, Hardy stood out for the weirdest reasons; his half-American, half-Jewish-Cockney-gangster-baker accent, his spurts of Cage-esque overacting, his constant expression that says “I dunno how I got here either mate”. It’s definitely one of his worst performances, if not his strangest.

Also, the actual symbiote was a full character as well — which I’m pretty sure has been added into the movie and I’m not sure what purpose it serves apart from some half-baked, oddly-placed jokes and an unnervingly heartwarming bromance between “it” and Hardy. It’s like cracking a one-liner with your tumour.

This leads me onto the writing and overall direction. What. The. Fuck. Is. This. Movie. Is it scary? There was, like, a jump scare at one point. But then someone just said the word “pussy” and that’s always gonna be for comedic effect — no one should ever say that word seriously and anyone who has should be bathed in bleach and Listerine, disgusting. Everything felt at the same time misplaced and predictable, like they were forcing clichés in where they weren’t even relevant, let alone fit.

Ah, a picture of Sony backing Tom into a five-movie contract.

There was action, I’m sure. I can’t remember any of it specifically – it was pretty samey, pretty blah. The CGI is standard, over-blown and uninspired. I remember laughing a lot at the ridiculousness of it all — there was a kid with a demon’s voice at some point. This review feels rambly — it is. I’m writing this in a half-hour vomit because that’s what Venom felt like to me; a half-hour spunking of just the most hodge-podged bullshit they pulled from the last three films they saw — if those films were Deadpool, How To Lose A Guy In 10 Days and the Upgrade trailer.

And despite all of that, there is a part of me that kind of enjoyed it. Yeah, it was total bollocks and kinda shitty with it, but it was those same shitty bollocks that dangle in front of every so-bad-it’s-good 80s horror b-movie I love. The weird, “how could they think this is a good idea” approach was there, but the overblown FX budget and A-list cast disguise it from what Venom truly is; not a movie, but a selection of oddities strung together in an overdone plot with Tom Hardy rambling through it, covered in spit.

To conclude, if you know what I watched in Venom, please tell because I haven’t the foggiest. It’s a totally bizarre superhero experience, that I’d recommend to anyone who wants to be confused in the most profound way. It was more than a shit superhero film, another Fant4stic Four, because it just boggles you into enjoying yourself. It’s a bad film, but I had a good time, what? It wades in a sea retarded novocaine, a demented laughing gas where the only thing being extracted was my will to live.