why do they always shoot the predator when it never works

why are they all morons

Yo, this be Reuben. Shane Black, writer of Lethal Weapon and director of The Nice Guys and Kiss Kiss Bang Bang, has got his greasy mitts on Predator. This is a franchise that is home to one of, if not the greatest, action movie of all time, being the original Predator, so it’s one with some pedigree attached to it, even if the later additions to the series haven’t quite lived up to the kind of glorious quality that the first one erupted out with.

Now, having seen and l o v e d Lethal Weapon and The Nice Guys, I attach high expectations with anything that has Shane Black involved, and with him at the directorial helm of this doohickey, I was hoping for something really fun. I mean… I guess I had fun with it? But this wasn’t exactly anything special, let’s put it that way.

Sure, it’s got all the right components, it’s got comedy, it’s got action, it’s got Predators, men too manly for their own good, big ol’ guns, etc, etc. But it all sucks. Sometimes it sucks like a Henry hoover, sometimes it just sucks a little. But it sucks all the same. 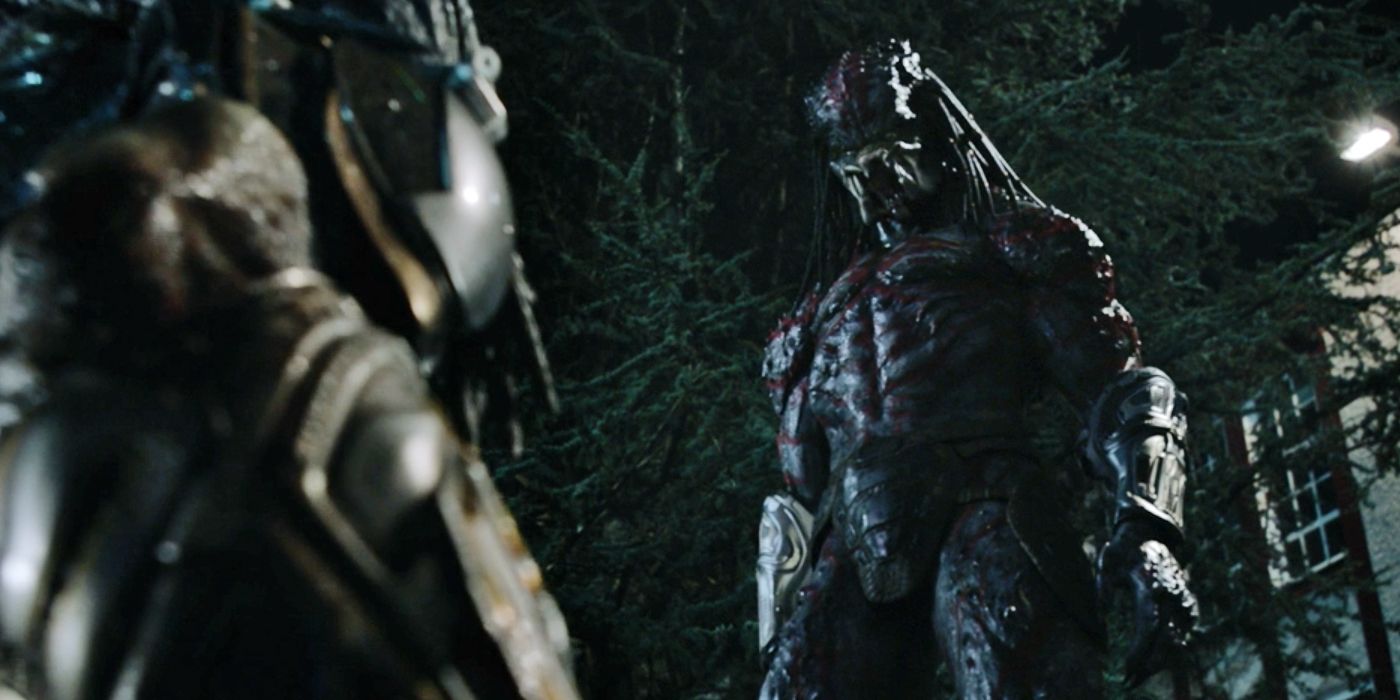 From the very first scene you know exactly what you are in for. The Predator dude comes shooting in in his terribly rendered space-craft at a faster pace than you can gather your thoughts, as he crash-lands in what seems like the exact same forest as the original Predator ended up in, whilst it all looks more dated than Attack of the Clones. He then proceeds to kill a bunch of peeps or something and main soldier dude (sniper Quinn (Boyd Holbrook)) manages to defeat him and take his helmet and arm weapon thing, which he then proceeds to send home to where his autistic son lives, who THEN proceeds to learn how to use it and it turns out that apparently people on the spectrum are at the next stage of evolution, which after first being paraphrased, is later literally shouted so you know it. Quinn then seems to the government to be a loony because he claims to have seen aliens and he gets put in the back of a van with a bunch of other ‘loonies’, as they dub themselves, and Predator dude that Quinn thought he killed breaks out of a lab and runs around causing general havoc. I had to ask Cam for assistance to explain the plot and he did it better than I could: (VAGUE SPOILERS BUT I HAD TO INCLUDE IT)

“Big boi crush small boi to obtain autism to become a smart big boi then sniper mgee and that one comedy dude are like oh no, then they kill big boi, the end”

(ALRIGHT YOU’RE SAFE NOW) Literally, the film is so damn hard to follow because the pacing is all over the place. Random crap explodes and important stuff happens but they all just kinda meld together into one big dumb mush of vague alien soup, in which more questions are left unanswered than I care to remember and levels of bafflement are through the roof. Also, there’s no feckin tension at all and that’s a big aspect of it missing. It feels like Shane and his bunch of merry men realised what they were making sucked within weeks of production but just rolled with it. They knew it would be fun enough to make up for it, this wouldn’t be a new Independence Day: Resurgence or anything like that. It’s terribly paced, the plot is confusing at best, the CGI is more than bog-standard and the action isn’t even that good, but it’s just dumb enough, and there’s just enough little redeeming factors to make it worth a watch. 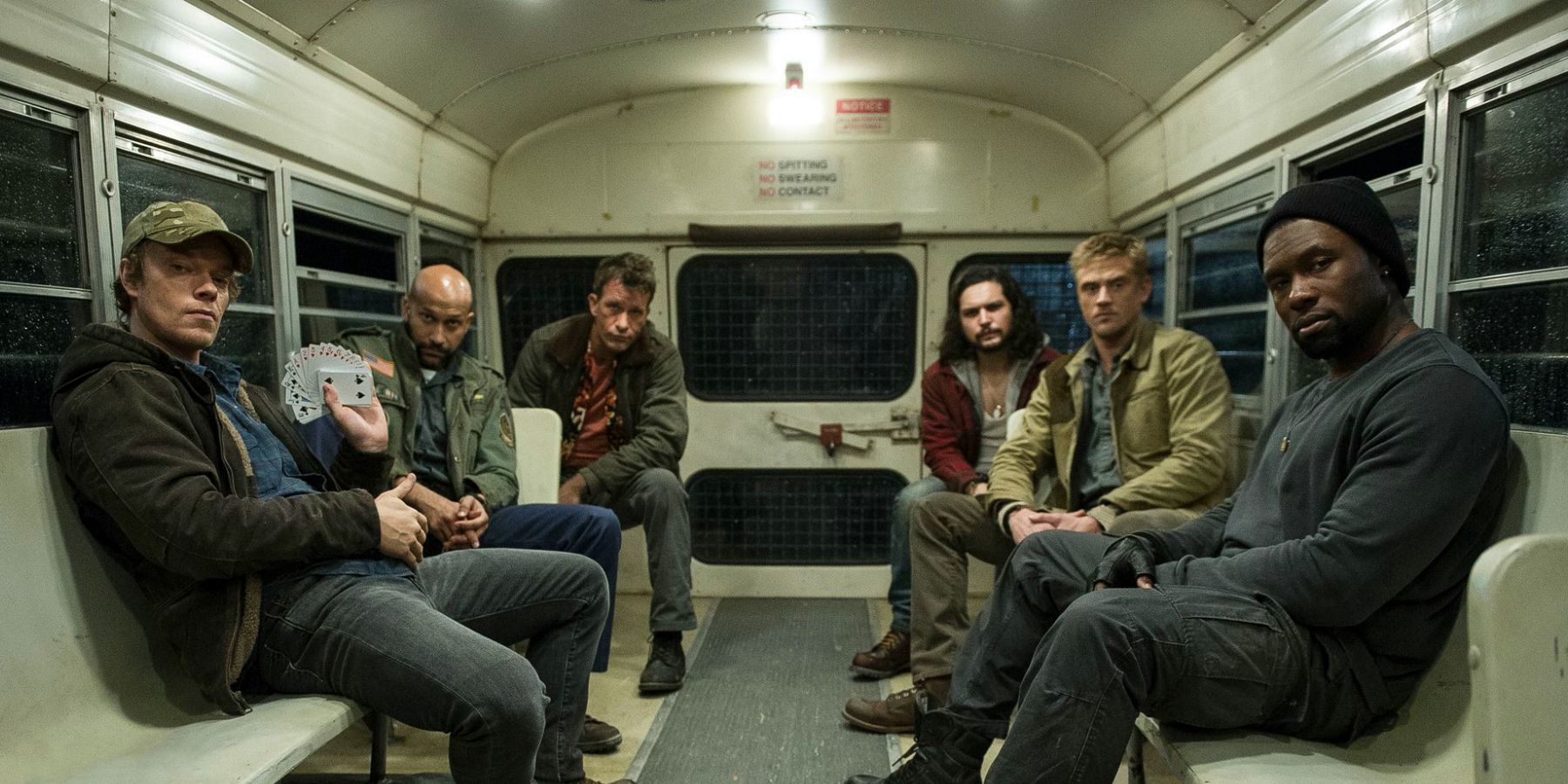 Pretty sure I’ve said this in like my past 10 reviews but: there they are, the lads.

Importantly, through all the half-assed production there is a real sense of fun. A bit of the Shane I got to know shines through every now and then, on occasion there’s a genuinely funny joke, and the characters do have more to them than just any old bunch of misfit soldiers you get in any old Micheal Bay flick — but, quick side note, there is some of the most ridiculous character protecting I have ever seen in this damn thing, please end me. I particularly enjoyed Nettles as a character, and the acting is far from the worst you’ll ever see, every character serves a purpose of some kind and I never had a particular problem with how they were acted out. True too, while the action is pretty average most of the time, there are some moments when it’s particularly bad, and some well-placed gags that do make it entertaining. And while the pacing makes it all so damn hard to follow, the quick pace that everything does happen ensures it’s never entirely dull. When all is said and done, it’s just a slab of stupid fun.

However, I think it’s a testament to what kind of film it is that I remember so little about what actually went down in it. I think if Shane put some more effort into it, and not just blatantly copied the original film and added so many average action movie tropes, we could have had something much less bad and much more entertaining. Still, it may be instantly forgettable, but enjoyable nonetheless and you could do worse than putting this on with your mates and having a laugh.