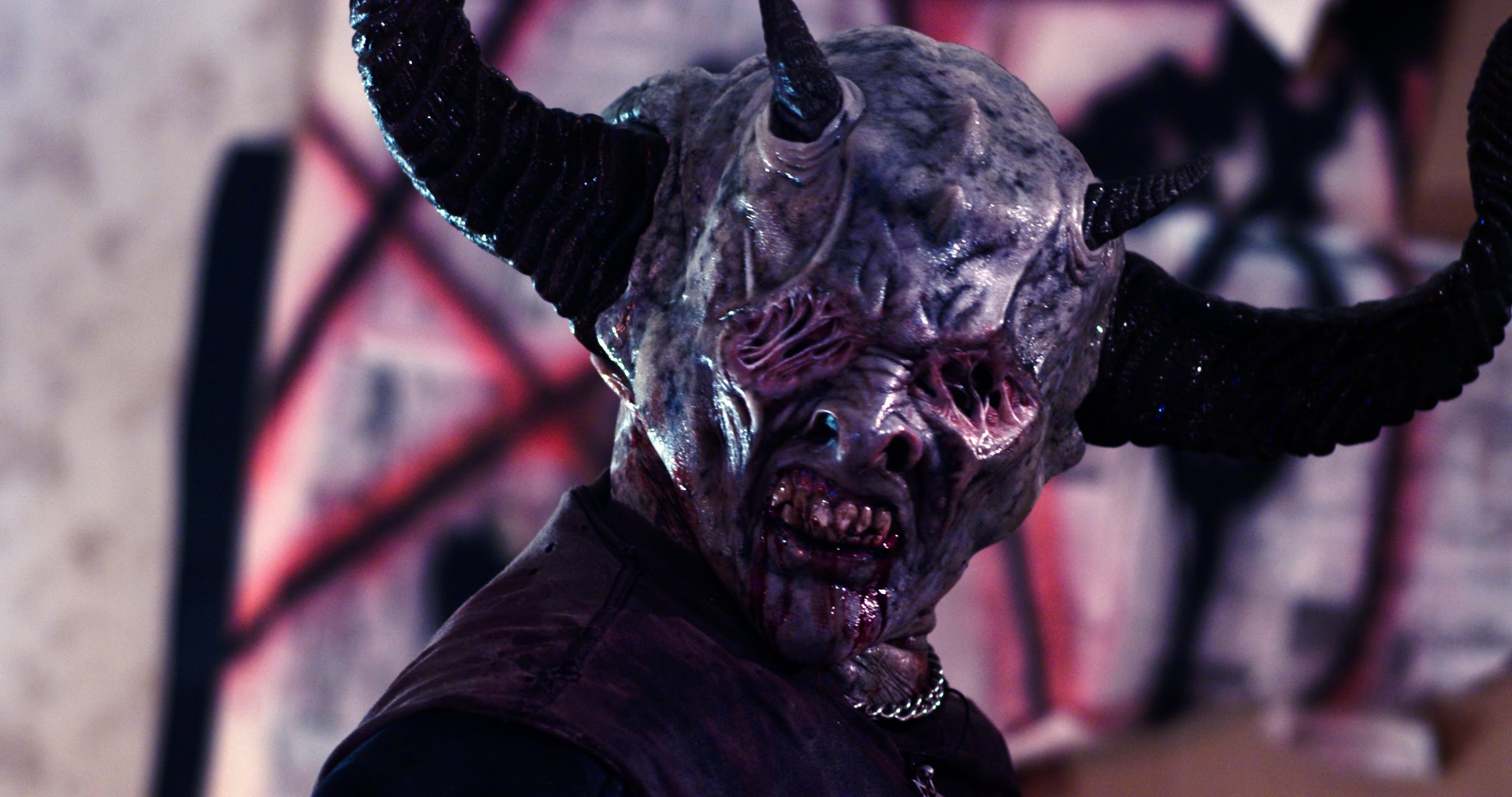 Usually, I like to know what I’m buying before I buy, such as the case with DVDs. Unlike Reuben (the maverick), I buy a DVD after I’ve seen and enjoyed the initial film. So, why would I have asked my beloved Grandad to buy me Deathgasm, before watching it? Because I’m a reb.

Thankfully, the film on that DVD was flippin’ awesome.

For those not in the knowledge, Deathgasm was an independent horror-comedy set in New Zealand. Two heavy metal fans summon a satan-like character and accidentally possess an entire town’s worth of people with demonic tendencies, yeah? Gore and killing ensue, as well as a kick-ass original soundtrack and some brilliant meta humour.

The fella above, Brodie, is one of the metalheads in question. Now, from the trailer, you’d be forgiven for thinking Brodie is a bit of a wingus-dingus-dongle bellend. However, Milo Cawthorne plays him exceptionally well. Awesome first name aside, Cawthorne gives a brilliant amount of naivety to the role, leading to some hilarious moments strangely reminiscent to Eddie The Eagle. There is perfect chemistry between him and fellow lead Zakk, played by James Blake, a rebel if I ever saw one and a bit of dick when things become clear. However, he is a badass all the same and contributes to 75% of the plentiful awesome moments in this film. The main object of Brodie’s affection Medina is unexpectedly awesome in the film, starting out as Princess-like popular girl cliche who surprisingly likes the outsider, what a surprise, then transforming into an axe-wielding death maiden throughout the film and then finishing as a full-on metalhead cliche. Her transformation may be from cliche to cliche but it is beautiful to watch. Though these are the main cast of characters, the support cast made out of a couple of comic reliefs and a forgettable bad guy also added, though in small, to the overall sense of adventure in the film. The young cast is used perfectly and, seeing that there were barely any speaking roles in the film over the age of 30, did a brilliant job.

They may be the actors, but the real star of this film was the beautiful, beautiful gore. Unlike other films, like WolfCop, that advertise themselves as “gore-comedies” but tragically fail to deliver, this film does deliver in multitudes, or should I say “gallons”, of the red stuff. The supernatural theme of demons make for some truly disturbing make-up jobs, adding to the horror of the film. These brilliant prosthetics are pretty short lasting, however, thanks to the plethora of ways each demon meets their demise. Every time someone died, it was never quietly, or cleanly. The use of practical effects was probably at it’s most impressive I’ve seen for a long time, with things going in and out of places every ten minutes, followed by buckets worth of human meat. Yummy.

This is pretty tame by the rest of the film’s standards.

So, we’ve done the eyes, now let’s do the ears.

For a film about heavy metal, you’d expect a reasonably appropriate soundtrack. You’d be right, and then some. Accompanying the copious amounts of gore, a flurry of brutal death metal adds to the sensory bombardment the film was seemingly going for, and I love it. Bands like the lovely Goatesque, the jovial Nunslaughter and the stand-up guys 8-Foot Sativa litter the mesh of sounds that form a surprising amount of backbone for the film. While I usually don’t love movie soundtracks to an extreme standard, apart from Rocky Horror and Scott Pilgrim, obviously, I could easily listen to this as a standalone.

However, a few slight issues with the film lied in the cinematography and lighting. Although I understand that darkness is a key part of night, I would appreciate if I could actually see what’s happening. Even when they were in, what should’ve been, brightly lit places, I could still barely make out some of the scenes and, especially, the executions, which was a bit of a disappointment. Whether it be a way to outsmart the censors and keep the film at a 15 rating, or simply bad light-work, it was a shame all the same.

Overall, Deathgasm was an absolutely amazing film. Words can’t really describe how awesome it was. The gore was plentiful, the soundtrack was top-notch, the jokes were genuinely hilarious, as were some of the situations and, for such a young cast, the performances were almost flawless. This is only slightly, slightly, let down by some poorly placed lighting.