In 1968, one of sci-fi’s genre-definers, Planet of the Apes, was released, starring NRA president and, coincidentally, general bastard Charlton Heston (after all, I have seen Bowling For Colombine and thus know all about and have solid, extremely respectable opinions about the open-shut case of gun violence in America). Grossing over 5x its budget domestically alone, it was only inevitable that a number of tongue-twistingly-titled sequels were to be released, with none of these films coming close to the same cultural impact or critical reception to their predecessor. With 1973s Battle For The Planet Of The Apes, it seemed like the franchise had died and, for 38 years, it had.
Oh yeah, and Tim Burton kicked its corpse a little bit in the meantime…

*Minor spoilers in a minute, like, not mental spoilers, but y’know, if you don’t wanna know anything, better safe than sorry…

Taking place after the events of Dawn, humanity is on its last legs, with the virus that wiped the majority out taking a more sinister mutation. Nonetheless, the war with the apes rages on, as Caesar (Andy Serkis) tries to defend his fellow apes from the squadrons of human troops. This all comes crashing down as an attack on his home leaves his wife and firstborn dead. With a powerful vengeance brewing, Caesar embraces his darker desires to hunt down the man responsible, The Colonel (Woody Harrelson).

Though I summed it up with unimaginable poise and skill (ah-thank you very much), the plot is actually a lot more than a simple revenge quest, with a lot of complex motives and narrative archs throughout. Personally, I struggled to remember which side I was on at certain points in the movie, making it a very successful and very engaging story overall. However, while I have seen certain critics describing it as “socially and culturally important” or having some kind of “widespread message”, even on a biblical level, it just didn’t ring through to me. Sure, I guess you could shoehorn in some kinda racial allegory if you were really looking for it but, while it was definitely more the thinking-man’s blockbuster, it was no Crash, not even Zootopia.

Stop monkeying about on those horses! No! Stop horsing about with those monkeys! Ah! Which one do I choose?!

Despite this, the film was very nearly a work of art, for an action summer blockbuster, at least. Though I couldn’t compare to the beauty seen in something like La La Land, the CGI on the titular primates was something of awe, with every single hair, every single speck of fecal matter thrown, being of meticulous detail, with the motion-capture actors performing wonderfully (but we’ll get to that later). Moreover, a brilliant touch added in the modelling department allowed the actor themself to be recognisable through the eyes of the ape, almost eerily at points.

Even without this trick photography, War for the Planet of the Apes boasts spectacular cinematography, with many scenes being almost made to be screenshot and admired; really capturing the feral nature of both the apes and the humans, complimenting the story brilliantly.

As you’d expect from an actor with such a successful career in a grey jumpsuit and little dots on his face, Serkis rocks it once again, with his ape mannerisms honed and nailed from his previous two performances as Caesar.

Needless to say, this is the actor’s best form yet. However, also impressing me to no end is Steve Zahn, as comic relief Bad Ape. Though only a supporting role, Zahn really brought it here, matching Serkis’ skills and becoming the standout performance of the movie, capturing the movements in a different way, while also bringing a fair amount of comedy into an objectively dark film.

We’ve also got Woody Harrelson, doing his best Colonel Kurtz impression, as the villainous Colonel. While I love Harrelson and he very rarely puts in a bad performance, and this was perfectly serviceable as a hateful villain, I thought he could’ve gone further with the role. He lacked what really makes a great villain, the ability to draw attention from whatever scene he’s in, with Serkis stealing the limelight every time.

Of course, from a big summer blockbuster such as Apes, you’d expect a healthy helping of big action set-pieces. While I left sufficiently satisfied after the film, I thought it could’ve had a bit more, y’know? Don’t get me wrong, when it kicked off, it kicked off. I was just hoping for something really spectacular which I don’t think I got. While I was hoping for some kind of “stand-out” moment, such as the Golden Gate Bridge in Rise or the assault on the human base in Dawn, I was left with another assault on a another base with a few more explosions. It’s not bad by any means, but it’s just a bit — more of the same. 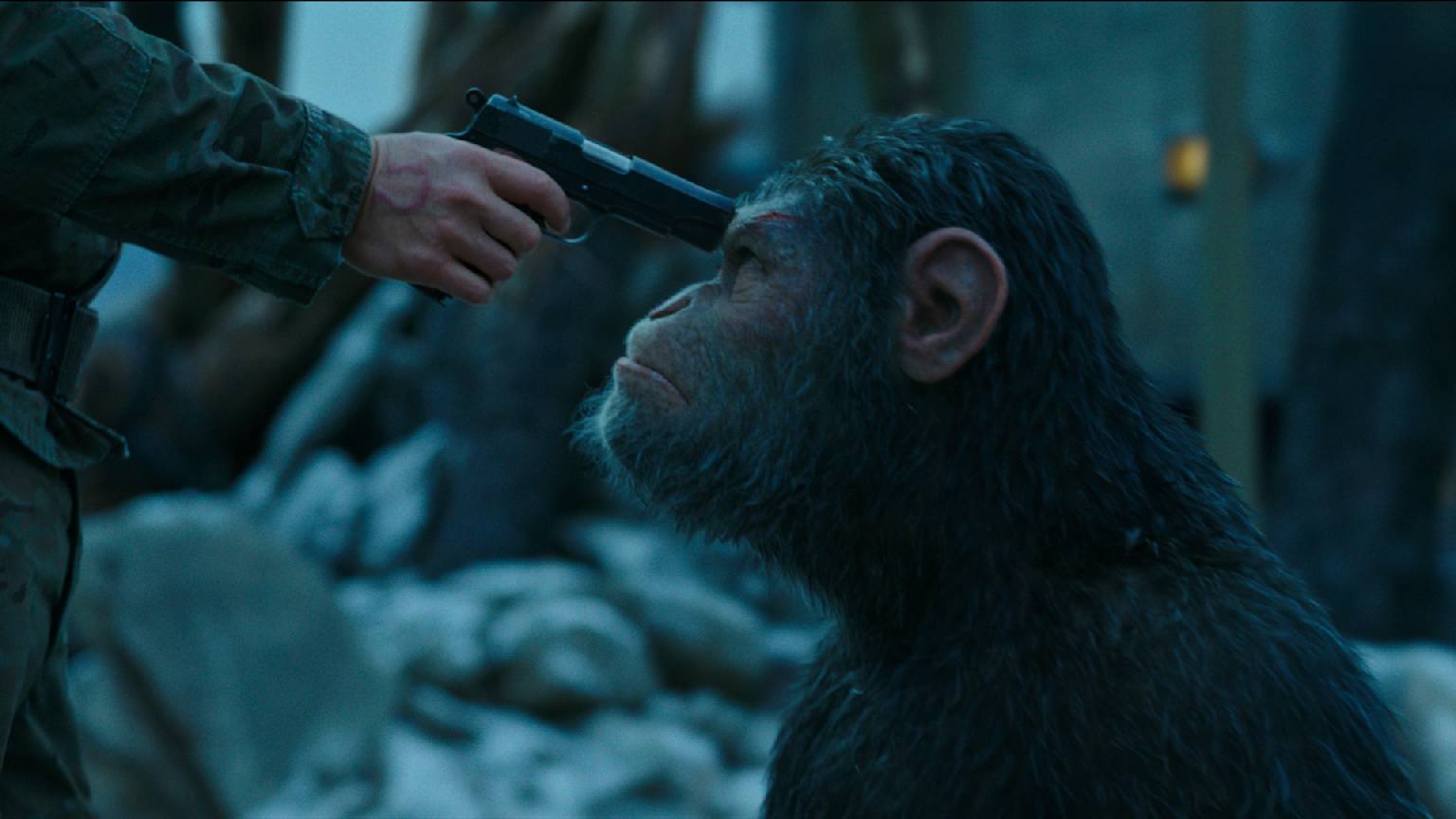 Sonically, however, is where War also shined. Composed by Michael Giacchino (who won an Oscar for his work on Up), the film’s main theme, in particular, captured a real sense of suspense and grandeur at the same time, standing out as one of my favourite scores of the year.

Overall, War of the Planet of the Apes, while probably my least favourite of the prequel trilogy, still impressed me with its technical achievement and awesome cast, as well as a top notch score and story, even if I thought the action was only slightly repetitive.