Top Five Films To Watch For A Laugh – Reuben

This is about as high res it gets.

This film is really, really, really bad. So bad, in fact, that it’s good, and quotable to boot! Quality film, great acting, spot on script, story and brilliant CGI with some damn cool Ice Spiders. The story and characters are so good that everyone in the film is seemingly an idiot who practically walks into the spiders to be teared apart, whilst the army is incompetent and the citizens and “soldiers” have particularly witty conversations.

Sharknado is already a classic in so many people’s eyes, a grand achievement considering it’s only been around a few years and it’s a TV movie, beating many a cinematic great in the decade – and without a sweat — amazing! It’s regarded in as prestigious light as it is for so many reasons, including it’s terrible CGI, awful practical effects, nonsensical plot and atrocious script, not to mention Oscar nominations worthy performances from Chuck Hittinger (of Boogeyman 3 fame) and Micheal Teh (best known for his role in Air Collision). It lives up to the hype, people.

Police Story is actually quite a famous film as action films go, and is often regarded one of Jackie Chan’s better films… Buuuuuuuuuuuuuuuuuut, when the English dub is on it’s glorious — in all the wrong ways, I assure you. Along with the amazing dub is also some of the best stunts in history, tonnes of silly fights, “Jackie!”s and a ridiculous tongue and cheek script in a non stop strikingly 80’s Hong Kong production. Without the dub, it’s fun. With the dub, it’s wonderful. Oh, man, Police Story: Lockdown looks awful. Boring awful. Watch the first one, and the second one if you so please. 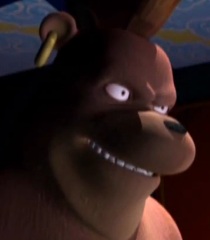 Don’t let the picture above deceive you, this film is not the masterpiece you were thinking it was. Not quite the critically acclaimed TV movie great that Ice Spiders so deservedly is, this is absolutely atrocious, in every way imaginable. A blatant rip-off – though really something wonderfully unique – of Kung Fu Panda’s Po, Pancada doesn’t steal the show, as the really, really hatable protagonist. This ballet loving identity thief come wrestler is met by a terrible, terrible cast of other unique characters, each with their own horrible little thing: Polaris, the rule breaking boss of the famous wrestling restaurant come betting agency (with a whole three visitors a day — I guess three is a crowd!) with the most haunting laugh known to man — ehh… Need I go on? Well, there is Freak Teddy, who I don’t really need to explain. Otherwise, Vídeo Brinquedo (notorious Brazilian straight-to-video rip-off merchants) must have been especially proud of the film’s high quality, definitely-not-about-3-frames-per-second animation, not to mention the film’s far reaching, deep and thought provoking plot.

What’s number one, you ask? Well, I’m sure you’ll love it whatever it is, won’t you?

If you haven’t heard of this, this article really is a godsend. The greatest work involving Jermaine Clement, this is much better than that Kung Pow rubbish when it comes to films making them look like they’re not trying to be a comedy. Milo will know what I’m talking about when I say this film is genuinely amazing, and one of the most funny films ever made. Infinitely quotable, this work of genius is perfect for when you’re looking for a stupid (and in it’s own way beautiful) laugh with its gloriously ridiculous plot, gag-filled script and deliberate awfulness. There’s also a perfect performance from Jermaine Clement as the incredible “Actionfighter” – one for the ages, that name – and the famous Sam Manu (look him up!) as the Tongan Ninja himself, in his awe-inspiring quest from his ninja training in Tonga to the harsh, cold, ordinary streets of New Zealand, as he goes from a mysterious Chinese restaurant to “The So Called Syndicate’s So Called Hideout” and dukes it out in epic battles with Knife Man, Gun Man, and — I’m going too far! Wait and see.

Seriously, do your self a favour and watch this film now if you haven’t already.