So, after being introduced to Halo Jones and her futuristic world in book one, we move into deep space for book two as we join Halo on a long-haul cruise-ship floating across the void, and this one turns out a little more exciting than the type of cruise advertised in the National Trust magazine.

We left Halo as she boarded the interstellar cruise-ship ‘The Clara-Pandy’, but book two doesn’t begin where the last left off, instead there is a prologue set many centuries into the future in a time period where Halo Jones has become a romantic legend who is the subject of university lectures. It may seem odd, but the main point of this prologue is, I guess, to give a bit of exposition (we essentially get a summary of the last book with some extra detail about the Hoop, where Halo lived) and also to hype the adventures to come. Basically, it’s there to say Halo Jones has become legendary after her adventures in space, the very adventures you are about to read, so be excited. It isn’t entirely necessary, but it isn’t awful either.

Anyway, the rest of the book is a contrast to book one in that rather than being a continuous narrative of one day, it is a collection of short episodes with time-jumps between them, basically the highlights of Halo’s year-long voyage. This is where The Ballad of Halo Jones starts to reach its full potential, as Alan Moore is able to introduce some memorable characters for Halo to meet and give us some juicy sci-fi concepts to get our eyeballs into. 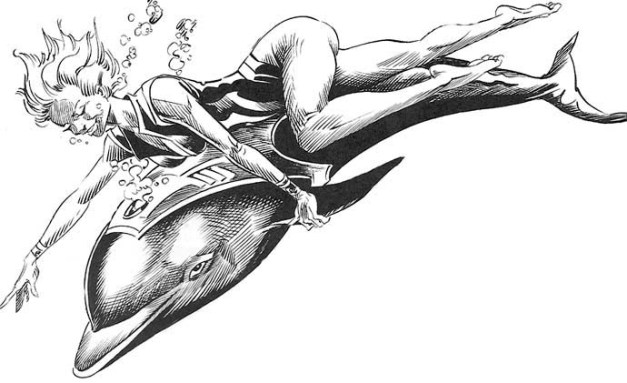 The first ‘short story’ involves Halo being taken hostage by some rather peeved soldiers, this little episode has some interesting political overtones but primarily exists to give us some action, specifically killer-robot-dog on soft-chewable soldier action. We are also introduced to the character of Kititirik Tikrikitit or ‘Kit’ for short, who if you hadn’t guessed is, in fact, a Dolphin, who steers the spaceship, because Dolphins are intelligent. It’s fun details like these that draw the reader into this universe.

Perhaps the highlight of the entire book is the section dedicated to the story of ‘Glyph’ who turns out to be one of the best ideas in the whole Ballad, and also a terribly sad character whose story would make a New Zealand rugby player tear-up. This character (purposefully) lacks any personality or definite gender, Glyph is a literal nobody, virtually invisible to other human beings, I won’t spoil anything about Glyph’s story but it is worth reading the Ballad just for this thought-provoking storyline.

We then get a story about Halo’s meeting with a Rat-King, yes, I did just type ‘Rat-King’, it’s an interesting one, with future ramifications I won’t spoil here. Then there is probably the second-best story in the book, involving Toby the robot dog literally turning into an insane psychopath. There is a chase sequence that is not only pretty darn scary, but wonderfully drawn by Ian Gibson, he utilises the graphic-novel format to heighten tension really well, with narrow, cramped-together panels so that it reads almost like a film.

Then there is a glitzy party, where Ian Gibson again comes into his own, especially regarding his design of the futuristic clothing. Then the book ends with the end of the cruise on the planet Charlemagne, a sphere made of frozen oxygen, it’s a pretty memorable ending with some fab visuals, but it is Moore’s dialogue that shines here in a conversation with Halo’s friend Rodice that finds Halo once again alone.

This book may be episodic, which may not be to everyone’s taste, but I like that they didn’t just do the same thing again for the second outing but changed the format up, kept it lemony-fresh. With a host of new characters and a spaceship setting Ian Gibson is on star-form illustrating here, perhaps a notch better than the last book, he especially seems to have Halo’s features really worked out, with a larger range of emotion than before. Allan Moore, on the other hand, is clearly enjoying expanding this universe and playing with various interesting sci-fi concepts, particularly – as I said before – with the Glyph storyline.

In some ways, I am reminded of the first Star Wars film, no, not episode one, the original-original. What with the first book being set on Earth (paralleling Tatooine in Star Wars), then this one on a spaceship with an emphasis on fun (with a bit of danger) could be the second act of that film, where Luke is aboard the Millennium Falcon and they have a bit of a jolly on the Death Star. Or maybe I’m reading too much into that link.

So, book two is a lot of fun, I like that Halo is still portrayed as just an ordinary girl in an extraordinary situation, it keeps her relatable and grounded and I dare say acted as quite a role-model for girls reading this back in the day. As sci-fi graphic novels go this may not quite be top-drawer stuff yet, although it gets close, the illustration is excellent of course and overall it is an improvement on book one.