Well, what a phat surprise! On the 30th anniversary of Public Enemy’s debut smashYo! Bum Rush The Show (their best), the veteran political hip-hop group released a surprise free download for their new 14th studio record, Nothing Is Quick In The Desert. As a moderate-to-large-ish PE fan, and a HUGE fan of free stuff, I was pretty excited to see what they were offering, especially after Chuck D and DJ Lord have been spending time with RATM and Cypress Hill members in Prophets Of Rage. However, I was also quite wary, considering that 2015’s Man Plans, God Laughs was probably the weakest in the group’s discography. So, is this new offering a return to classic PE form? Or is it just another mistake that I’m gonna have to forget about… 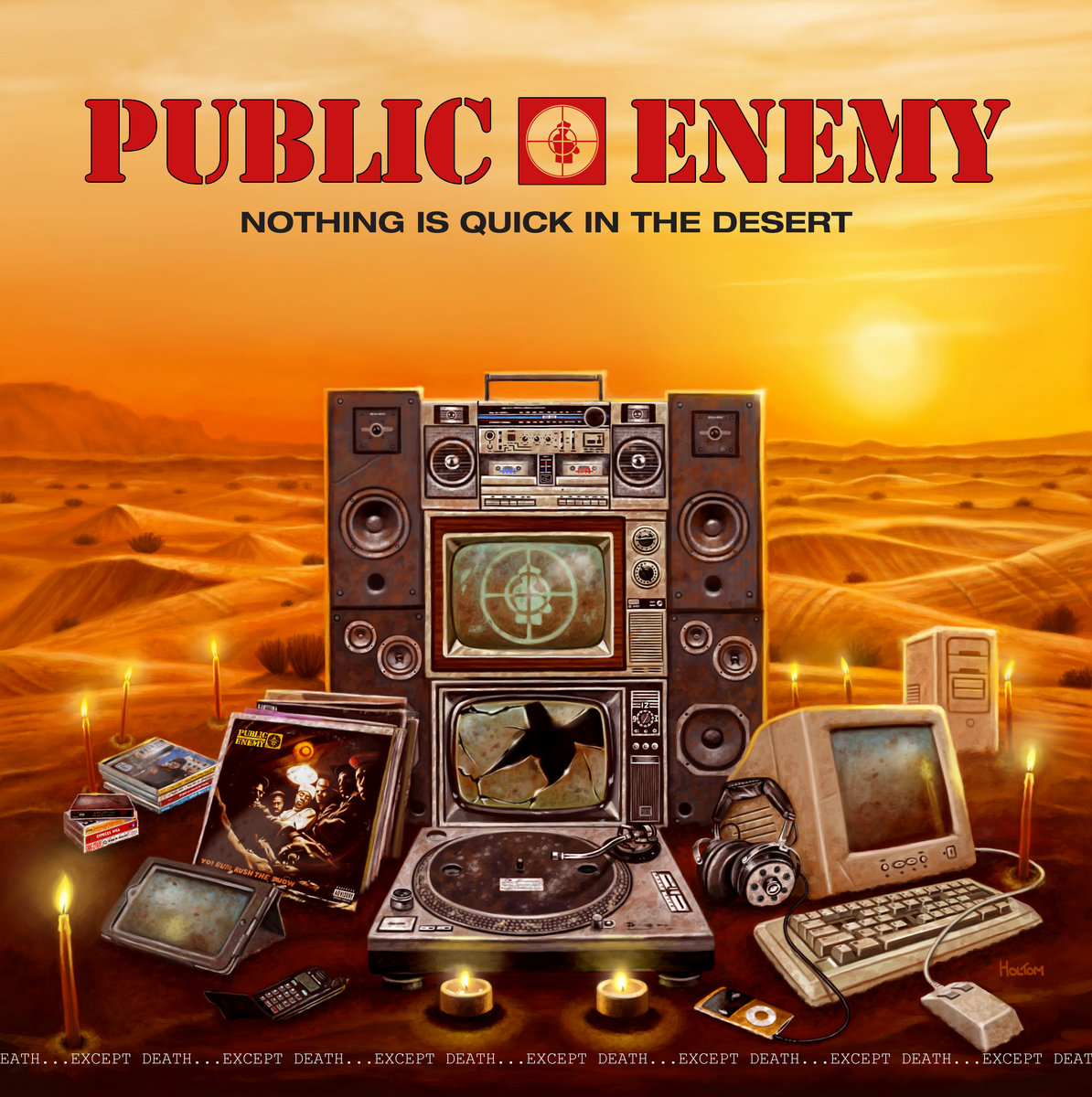 Yo, that’s a mint set-up you got there, bro.

Well, of course it’s not gonna be another It Takes A Nation Of Millions, that’d be insane. However, I can solidly say that this is not in the same murky, scum-ridden depths of Man Plans because of one key feature — the production. From my memory, I seem to recall that the 2015 LP had a very glitzy, very modern style, which is a far cry from the sample-heavy stylings of The Bomb Squad, I think you’ll agree. As you can tell from my tone (which is so easily translated onto an article, obviously), I was not impressed, especially after the two stellar records they brought out in 2012.

That being said, you’d be forgiven for thinking that Nothing Is Quick has adapted that same production-style, with the eponymous intro track having this very obnoxious guitar/bass loop that I could’ve pulled off of the latest top 40 shite. Moreover, as you’ll soon find, it’s really out-of-place, which really isn’t what you want in an intro track, where you’re supposed to be showing off the album and what it’s about. That being said, when Chuck D says the line “Death comes quick in the desert, my friend”, I do get well gay for him.

Following that, however, is the BEST song on the album, in sPEak!. With a dense (though not Bomb Squad dense) production, this track also boasts a killer hook and bass loop. Moreover, it’s also notable for having a really tight delivery from Chuck D who, let’s be honest, isn’t exactly famed for his performance over his lyrics. AND, just when you thought you were in the clear, Khari Wynn smashes the window in with a wicked guitar solo to close the song out. That alone puts this above literally everything on Man Plans.

However, as Primus eternally stated, they can’t all be zingers. Hooks are an alternating current on Nothing Is Quick (and I thought GCSE Physics would be a waste), in that some are great (as seen on the aforementioned sPEak!), while others are complete tits. Notably, we have the weakest hooks on Beat Them All (which is just “BEAT! THEM! ALL! BEAT! THEM! ALL!”) and Yesterday Man. I think it’d be safe to say that the latter track is probably the biggest tragedy on the album, with the intro being a promising piano piece with some Flav samples over it, a potent combo indeed. As the beat kicks in, the anticipation for a quality song increases. Then, we have an overly long speech sample, and the tone changes completely. The piano is swapped for an ugly guitar loop and the samples are swapped for a shite hook that name-drops rappers like Rakim and Dre, and that’s it. It also contains one of the worst lyrics in PE history; “Kanye marrying Kim/Bruce Jenner turned to fem“. Let that just sit for a minute.

Following Beat Them All, we have another highlight in Smash The Crowd. Instantly, I’m a much bigger fan of the instrumental here, with a wicked guitar loop backing up some quality bars from Chuck D and a few guest rappers. One of which, Ice-T, of Body Count and solo fame, spits a particularly vicious verse where his obvious gifts in performance are seen. Ironically, this followed by a song that highlights Chuck D’s major weakness, which is delivery. So Be It isn’t necessarily a poor, I mean, it’s not the best, but, while the content is definitely there, the first verse, particularly, sounds almost clumsy at parts. The proceeding song, SOC MED Digital Heroin really is just your run-of-the-mill fare, nothing too spectacular but fine nonetheless. However, Terrorwrist, the 1:57 track that follows it, as a very Britcore feel to it. For those who aren’t aware, Britcore is a sub-genre of hip-hop that originated in the UK and is notable for very dense instrumentals and aggression, so not too far from what PE does anyway. However, whether it’s just the repetition of the word ‘terrorist’, which is common in groups like Hijack, or the distorted, demented bass loop, I dunno, but it does seem familiar. Needless to say, it’s definitely one of the stronger instrumentals on the album.

Finally, we have Rest In Beats, a two-part tribute to the many fallen rappers over the years. While the hook of part 1 could seem as name-droppy as that of Yesterday Man, it could also be argued that it’s fitting to recognise such talents as Big Bank Hank and Biggie, among many others. Apart from that, the bass-heavy instrumental has a very lo-fi chillout feel to it, as does the vocal performance. However, as the second part rears its head, that instrumental is swapped out for a bit of Nile Rodgers-esque funk guitar. Now, if you know me, you’ll know that I like me some Nile Rodgers funk guitar, but I’m too sure how I feel about it on a Public Enemy record. Regardless, it follows similar lyrical themes as the first part and does serve as a fitting closer to the album.

Two years after their worst album to date, Public Enemy are back on the 30th anniversary of their debut Yo! Bum Rush The Show, still their finest in my opinion, with Nothing Is Quick In The Desert. The glitzy production of Man Plans God Laughs is all but obliterated here, with a more Bomb Squad-esque approach. Even if it isn’t perfect, it’s plenty good enough to make it miles better than its predecessor. Content-wise, it has its fair share of great highlights (sPEak!, Smash The Crowd, Terrorwrist) and absolute shite-bags (Yesterday Man, Smells Like Teens Hear It, Toxic). What we’re left with is nothing more or less than a decent album, but I know they can do better.

Download Nothing Is Quick In The Desert for free! No, seriously! It’s, like, official and everything! (until July 4th): DINGUS