I’m gonna let you in on a little secret. You know a nice band called Cannibal Corpse? Well, if not, they’re a disgustingly horrible death metal band that Jim Carrey likes and I’m not really sure if they’re a joke or not. Anyway, me and Milo thought it would be a great idea to listen to their 1992 album, Tomb of the Mutilated, and review it – Milo taking on the quest. I would’ve let him swear his heart out and it was going to be posted on Christmas day, as an “Extra-Brutal” review and everything, but… Unfortunately the lyrics and everything about the album are way, way, way too disgusting, horrific and violent that it would make him throw up when listening to it. Post Mortal Ejaculation suggests that it’s a bit of a joke, but some of the lyrics in other not-to-be-named songs beg to differ. A bit of a cowardly move to cancel it, maybe, but if it meant spending Christmas dinner thinking about violent men violating and killing people brutally, it probably wouldn’t be worth it.

Probably better than this, though.

Anyway! There’s some other things I want to talk about too! Star Wars, eh? I’m sure you’re aware The Force Awakens is coming out in the cinemas tomorrow (the next day in the US), and I’m sure you probably want to watch it, unless you’re adamant about not being a fan of Star Wars. However, that’s what gets to me. How can someone not be a Star Wars fan? It baffles me.

How could anyone not be excited by this?

Star Wars has a broadly spanning sci-fi, lightsaber infested story, with a greatly detailed galaxy and incredible action all over the joint. Epic lightsaber duels, explode-y space battles, gun fights, sinister villains and classic heroes. It all entertains the viewer, and Star Wars is by no means boring, by any stretch of the imagination: that being why I can’t stand by and let people not try Star Wars – especially when you have a chance to watch one in the cinema, directed by the brilliant J.J Abrams and reviewing fantastically.

Or is it Smash Bros.?

Or is it Smash Brothers?

Or is it Super Smash Brothers?

This is something that bugs me whenever the subject of the game comes up — so much so that I avoided writing any variant of it’s name and instead wrote “the game”, begrudgingly, indeed. Most people nowadays say Smash when talking about it, as it’s easy, short and quick to say. However, there are some who get irritated by this “annoying” abbreviation, and can instantly disregard what the person said purely because they said “Smash”. Therefore, these picky people choose to say Super Smash Brothers most of the time, occasionally having a go at saying Super Smash Bros. to skip one syllable and avoid being taken the mick out of.

Although the people who don’t like it when people say “Smash” are annoying, I do find the people who do say “Smash” rather annoying too. “I can’t play Ike”, or “can you play Ike?”, or even “I don’t play Ike” come about often. It really annoys me. It’s fine abbreviating the name of the game, people do that all the time. It’s normal. But what annoys me is when they abbreviate a normal sentence. Instead of saying they “can’t play as Ike”, they say “I can’t play Ike”. Are you really that lazy? Really? You can’t say “as”? I’ll spell it out for you. AS. A-S. It’s simple, really, it’s pronounced, ah-z. As. It’s a perfectly sayable word. I mean, come on! Missing out a word in a proper, English language sentence is downright wrong. It’s when these people say “I can’t play Ike” and “Smash” all the time, it get’s annoying. Especially for an Englishman. It’s an American thing to do, isn’t it (sorry any Americans reading this). Americans tend to shorten words and simplify spellings and all that, so it’s more normal for nerds over there to say “Smash”. But here in Britain. Come on, people. Say the extra words.

You know who I’m on about. I mean the ones who go only for the competitive scene of the game, only go on For Glory one-on-one, snigger when people play as Sonic and/or Little Mac (just to say, “I’m better than you.”), throw up when someone turns items on, and only go on Omega stages. These are the people afraid to broaden their horizons to the more fun, silly and colourful world of For Fun (it’s in the word, FUN) and open their opportunities for more gust bellows deaths, taunting when they really shouldn’t, giving Smash Tour a go and a hell of a lot more laughs. Don’t get me wrong, I like the competitive scene as well as the items scene, it’s in finding a balance between the two I’ve found the most enjoyment in the game. I play For Glory a lot, and I love it, it gives the game a fantastic extra-layer which really makes you want to practice more; but for all multi-player (though perhaps not 2-player in some instances), having items on, excessive taunting and stupid accidental deaths which probably weren’t you fault is what makes it really good. That’s where it’s at, I don’t care what you think.

However, I don’t want you to forget these “Smash” people annoy me a little.

Nonetheless, I don’t get as annoyed about it as the regimented “Super Smash Brothers” people, who refuse to just say “Smash” and show obvious annoyance when hearing it. These people are the ones who never really go on For Glory, and never really broaden their horizons to the depths of the competitive scene – on few and far between occasions, at least. They can get a little annoying, and they do get too annoyed by the “Smash” people; but I tend to go more with their side of the argument. These are the people who don’t care what character you choose, don’t care what level it is, and can react effectively in any silly item induced situation. These are the people who play it properly, really, other than their lack of consideration of the up and coming competitive scene, which is certainly worth a go. 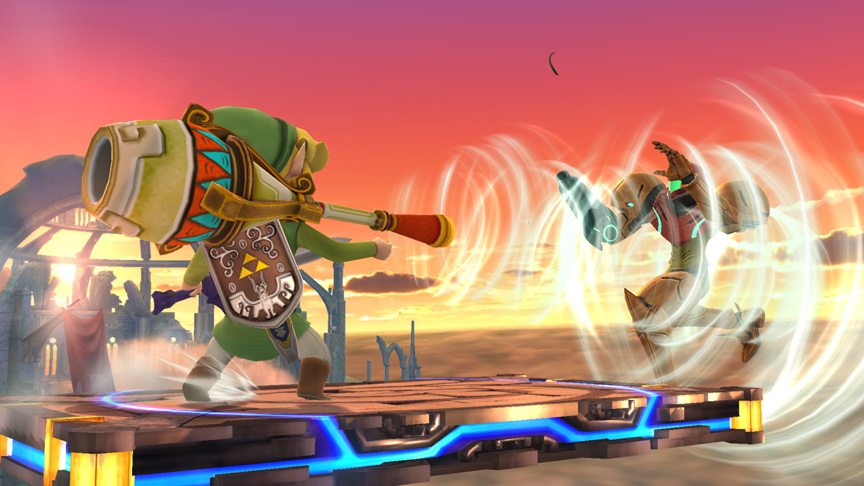 This sure is fun, but give the other stuff a go.

I tend to go for the middle ground. I like both types of gameplay, competitive and silly – though I do prefer silly, definitely. I get a bit annoyed at both types of people – mainly the “Smash” ones, with their inability to speak proper English and complete refusal (pretty much) to enjoy the silly side of it all.

I want to be part of a world where no-one picks a side, and both sides of the argument are considered. Because, as it is, it’s war. And I’m Switzerland. I want to stay neutral, but I feel like maybe I should do something to help? As it stands I say “Smash Bros.”, or “Super Smash Bros.”, possibly “Smash” or “Super Smash Brothers” in the right situation. I want to be able to say which one I want – which is I think Smash – and not be ridiculed, or what have you.

Anywho, Bayonetta is way cool, even though I’m disappointed by the lack of Ice Climbers or Wolf. But it’s DLC. So anything can be let through. And that be cool, albeit slightly expensive.

I’ve gone and put 8 games on my Christmas list. I’ve done this when, on my Backloggery, I’ve got 26 unfinished games on my now playing list. Including Pokémon, Fantasy Life, SMASH and so on. It’s always a grueling task trying to complete a load of games before Christmas. But if I get Alpha Sapphire even though I haven’t completed Y, I won’t be disappointed.

And that’s about all I have to say on that other than I really should watch a Christmas movie now, and, Merry Christmas.